Steven Moffat has continued the traditionally awesome Doctor Who Christmas specials that began with the sensational “Voyage of the Damned” written by his predecessor, Russell T. Davis.  This episode was based on the 1974 book, The Voyage of the Dammed, written by Gordon Thomas and Max Morgan-Witts.  The book describes the fate of Jewish refugees who were forced onto the MS St. Louis ocean liner and were denied asylum in both America and Cuba in 1939.  Back to Doctor Who, the episode describes the bitter ex-corporate tycoon who is out to create the most collateral damage thereby bankrupting his former corporation, while in the process killing everyone on board and the Queen of England by crashing into her pad. 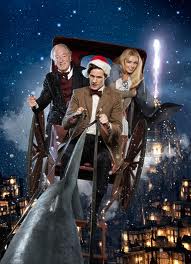 recreating A Christmas Carol with a 2010 special also called “A Christmas Carol.”  Moffat not only captured Charles Dickens’ original spirit of good triumphant over greed; but he then updated and amazed us with technological and psychological leaps that kept us glued like a kid eyeing the biggest gift under the tree.  Adding flying sharks and opera singers made it even more mind-blowing, but the greatest feat was travelling back in time in the life of Kazran Sardick a Scrooge-like character. Thus, reversing the focal point in Sardick’s past so that it changed reality and altered his present-day self and saved the lives of the Doctor’s companions.  It’s wickedly complex, magical and a bit sentimental, but that’s why we love it so much.

Finally, the latest in the series of Christmas Stories, “The Doctor, the Widow and the Wardrobe,” based upon C.S. Lewis’ The Lion, the Witch and the Wardrobe.  Miracles happen, so we do feel that the Christmas spirit has been kindled.  However, the similarity to the original story is not as pronounced or profound as we would have liked.  Featuring widowed Madge Arwell and her two children there were no cute characters (unless you count Matt Smith) or beautiful, bewitching evil witches.  The only evils ones were men who wanted to harvest trees by killing them with acid rain and WWII tragedies of missing airmen.  The evils of being lost at war (although this did relate to The Lion, the Witch and the Wardrobe) and of acid rain seemed too far removed from the original very deliberate mind-altering ice queen.  Alas, the only comparison that we could make is that it left us feeling cold and missing the warm relationship with his companions.

In fact, we started reminiscing about past companions and how in the end it just didn’t work out.  Martha Jones loved the Doctor but realized that it was never going to happen, Rose Tyler got stuck in another dimension, Donna Noble was forced to forget the Doctor because her mind would blow up if she didn’t and finally there was Amy Pond and her mysterious daughter, River Song.  We couldn’t see any future there because Amy was married and needed to stop dragging her husband over time and space and River Song said the beginning was the end so where does this leave us now? If he comes back does time stand still again?  So we were already grieving that loss more than the loss of the characters in this year’s special.  But just as the Doctor saved Madge’s family, she saved him by saying he couldn’t let them think he was dead.   So another Christmas miracle happened just about the time we were contemplating that a new non-emotionally attached companion (in other words a man) would be the best answer to travelling around deep, cold space.   He arrived at Amy’s TARDIS blue door and she announced to “Mr. Pond” that the Doctor was there, the ice inside our hearts melted, too.  Everyone (including the Doctor) cried tears of joy and we knew that the Doctor could make his way with his current companions, especially now that he is reunited with River Song as his wife and soul mate for a very long time to come (or the end of time, once again).