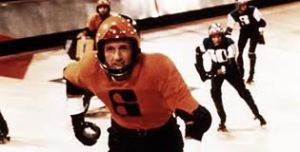 I didn’t catch the Super Bowl last night. It’s not because I didn’t like the teams playing, but because I don’t enjoy football. I won’t go into how boring the sport is with the constant timeouts, overinflated egos, etc. But there is a sport I would rather watch if it existed. Which one? Why rollerball of course!

The film Rollerball was released in 1975 and was based on the short story “Roller Ball Murder.” It takes place in 2018 in a liberal’s worst nightmare: a world ruled overtly by faceless corporations. One such organization, the Energy Corp. backs the popular Houston team in the sport of rollerball. It’s a lot like roller derby. Teams in two opposing teams skate around a closed arena (th0ugh some ride around in motorcycles) and are clad with spiked gloves, body armor and helmets. The object of the game is to get possession of a steel ball and score points by slamming it into a cone in the arena. Along the way, the players use violent means to gain possession of the ball and score or to prevent the other team from scoring.

In this future, there isn’t any other sport but rollerball is wildly popular. It’s also supposed to be a sport that emphasizes the work of a team, while diminishing the efforts of the individual. There’s the film’s conflict. Jonathan E (James Cann) is emerging as a popular sports figure but the corporations disapprove of this since they don’t want an individual hero. See, they want to keep the average person down and make him or her feel powerless. That’s because the mantra of “one person making a difference” no longer applies in the new world. Most of the film concerns itself with Jonathan E being persuaded to retire from the sport and his reaction to the effort.

But enough about that, my favorite parts were with the game itself. That thing is wickedly violent, and that’s even before the corporations eliminate penalties halfway through 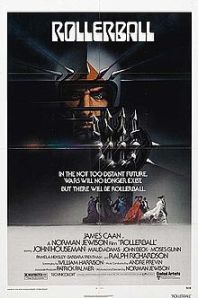 Rollerball! See, they want the game to turn so violent to make Jonathan E want to step down, and things get very desperate for the evil corporate bosses in Rollerball’s last act. At that point, the final game is a no-holds-bar brouhaha with lots of explosions, blood and maimings. But like a true hero, Jonathan E just sucks it in and gets just as violent as the other players, coming off as some kind of futuristic gladiator. What kind of violence is in this film? Lots of bashing across the face and skull with the spiked gloves, players get dragged around the arena, players smashing into each other; it’s easy to see why this sport would placate the masses and their bloodlust.

Now ask yourself, would you see anything like that in football today? Thought so. Supposedly football is popular because of the violence. Please, if you want that go to a boxing match or a good hockey game. The players in those sports wear less body protection. And it’s the closest we’ll ever get to rollerball.

One comment on “Football? Bah! Give Me Some Rollerball!”