With the re-release of Jurassic Park in theaters, renewed interest in the twenty-year-old film has arisen. Putting aside all the raves about the 3D conversion process used in Jurassic Park’s re-release, many have come to realize or remember how monumental it was when during its initial release.

During the summer of 1993, one couldn’t go anywhere without seeing that iconic logo with the t-rex skeleton. The film was a marketing dream with its realistic dinosaurs that were instant hits and helped sell dinosaur-related merchandise. The previous three films that had similar cultural impacts were Jaws, Star Wars and E.T.: The Extra-Terrestrial.

Many of its delightful and revolutionary aspects are taken for granted nowadays, notably the extensive use of CGI (computer generated imagery) that brought the dinosaurs in the film to life. The visual effects process had been around for a few years and came to public awareness with films like TRON, The Last Starfighter, The Abyss and Terminator 2: Judgment Day. But the effects wizards working on Jurassic Park went the extra mile at the behest of its director Steven Spielberg.

Originally, the dinosaurs were to be a mix of animatronics (done by Stan Winston) and the offspring of stop motion animation, go motion animation (to be done by Phil Tippet). However, Spielberg wasn’t quite satisfied with the limited scope of go motion. The dinosaurs in screen tests didn’t look convincing enough. Animators Mark Dippe and Steve Williams presented to Spielberg a test reel featuring the famous t-rex in Jurassic Park for the first time as a CGI. That was all Spielberg needed to see. Tippet quickly adapted, and he and his team of animators re-trained to become CG animators.

The impact of seeing those realistic dinosaurs in the big screen cannot be overstated. Audiences were floored when 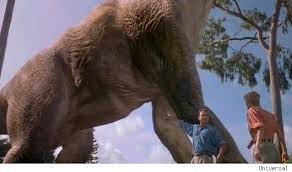 the first full shot of the brachiosaurus in the park was unveiled. Probably the closest experience from seeing dinosaurs recreated on the silver screen that compares to it is way back in the 1920s when the dinosaurs in The Lost World  terrorized audiences. With Jurassic Park, while more educated audiences knew that dinosaurs sadly no longer existed, they found themselves wishing they did and this was the closest they would get to witnessing realistic recreations.

The use of CGI is commonplace today and has been since the 1990s, which can lead to an unjust dismissal of the film. Jurassic Park also masterfully blended that process with Winston’s animatronics (as seen when the t-rex first appeared in the rain) and CG was also used in subtle ways. For instance, there was a scene where a female stunt double for actress Ariana Richards has her face replaced by an image of the young actress.

There have been many attempts to recreate that phenomenal film in the way that left people speechless as to what was possible to do on film. None, not even Jurassic Park’s sequels, were able to do that, though there were many admirable attempts. Part of the reason is that people have come to anticipate CG marvels when seeing a film. It’s when a CG is done poorly that it registers and believe it or not there are tons of films that come out today with CG effects that are inarguably inferior to what was accomplished with this twenty-year-old film.

But it would be a mistake to celebrate Jurassic Park just for its ground-breaking effects and topnotch marketing. It took a genius of a filmmaker to bring Michael Crichton’s epic novel of the same name to the silver screen. There are many divergences from the novel, but if it were to be filmed as it was written, the producers might’ve had an R-rated film on their hands with many unlikable characters. Spielberg and the writers were able to soften the story, while still keeping the book’s thrills and scientific curiosity, and injected a sense of wonder and fleshed out the characters. It was their efforts that made sure that the film wasn’t just an effects extravaganza. The story and characters mattered and that is one of the main reasons why the film still endures today.