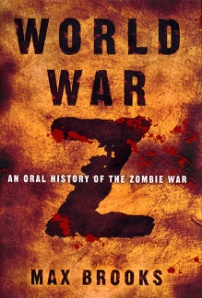 Trends come in cycles. Recently the popular culture has seen the return of an old and familiar staple, the zombie. The Hollywood ghouls started out in the spooky black and white classics of the 30s and 40s, but they were branded into the baby boomer consciousness via George Romero’s 1968 classic Night of the Living Dead. To be fair, they’ve never been away much since, thanks to Living Dead‘s various sequels, semi-sequels, and remakes. But in 2002 British film wunderkind Danny Boyle gave the genre a shot of adrenalin with 28 Days Later, about a deadly virus ravaging London and turning survivors into hyperkinetic, psychotic killers. For zombie fans, the die was cast.

In 2003 writer Max Brooks – son of Mel Brooks and Anne Bancroft – wrote The Zombie Survival Guide (TZSG), a tongue-in-cheek “how-to” on surviving a zombie onslaught as society breaks down. TZSG was a New York Times best –seller thanks to its dark humor and occasional light tone. The book’s characteristics, however, did not mask the fact that underneath the surface it contained some very useful survival information, and it’s easy to see that Brooks did his research. His work must have fuelled a thirst somewhere, because a month later Image Comics began publishing Robert Kirkman’s The Walking Dead (now a hit TV series on the AMC cable network), describing the adventures of survivors of a zombie apocalypse.  The undead were officially back in style.

Not to be outdone, Brooks took zombies one step further and in 2006 came out with World War Z (WWZ), describing the entire history of a massive, deadly zombie onslaught – a war, basically between humans and the undead (“Z” for zombie, if you haven’t yet figured that out). The zombies are the same as those in TZSG, making the book a follow-up of sorts.  According to Brooks, zombies are humans re-animated by an incurable disease, spread by a zombie bite or having open pores exposed to zombie tissue. Taking a page from Romero’s model, they are slow, brainless creatures completely devoid of intelligence, whose sole instinct is to eat live flesh. They are incapable of tiring, cannot drown, and can only be killed by a blow to the head.

Other than that, WWZ is very different in style and tone than its slim predecessor. Patterned in structure after Studs Terkel’s classic oral history of WW2, The Good War, WWZ is not one story per se like Kirkman’s comic but rather a series of individual accounts telling the story from the initial sudden outbreak to mankind’s victory and the sad, weary aftermath.  The book’s narrator (in whose voice Brooks writes), a member of the (fictional) United Nations Post War Committee, is commissioned to interview survivors from mankind’s war against zombies.  Like a twisted travelogue, Brooks shuttles around the world, as survivors running the gamut from military, clergy, health services, government officials, security, and ultimately the average citizen describe their experience and the ghastly horrors they witnessed.

In a chilling opener, the story begins quickly but methodically. In a remote, rural province in China, a young boy goes diving for sunken booty with his father. His father is pulled down by something unknown and the boy escapes but is nipped on the heel.  The poor infected lad becomes “patient zero”, infecting others and kickstarting the zombie pandemic. Once the infection goes beyond the village, it acts as an out-of-whack Rube Goldberg contraption, setting in motion a chain of events that will change the world.  Infected Chinese refugees begin streaming across the border into Central Asia. Others fly out to Europe, bringing the infection to the continent. The Chinese government feverishly tries to halt the spread and invents a military crisis involving Taiwan to mask their armed build up and activities.  Only after hitting the poor South African ghetto townships does the world begin to take notice, calling it the “African Rabies”.  Israel is one of the first to respond, imposing a national quarantine, granting entry only to uninfected Jews and Palestinians, and calling out the Israel Defense Forces for border security.

Through the illegal organ trade, the infection reaches Brazil and once in Mundus Novus it begins to wreak havoc.  Zombies rip through an unprepared United States, as corruption, government incompetence, and overconfidence result in some heavy bungling and widespread deaths. Millions all over the world begin fleeing their homes for safety, as the “Great Panic” begins. At a major, decisive battle in Yonkers, New York, American soldiers fight a massive and frightening wave of undead as if they were fighting living soldiers. Using inappropriate techniques against an undead army – such as attempting to “demoralize them” – they fail miserably and the American forces are brutally defeated on live TV. Other countries encounter similar disastrous results and world civilization as we know it begins to crumble. END_OF_DOCUMENT_TOKEN_TO_BE_REPLACED