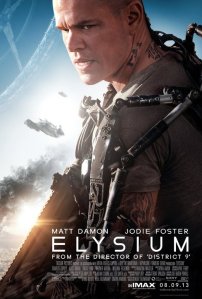 Director Neill Blomkamp has returned after his triumphant debut film District 9 with his sophomore effort Elysium.

The film takes place in the year 2154 in Los Angeles and a giant orbital space habitat called Elysium. Earth is overpopulated and overpolluted, it’s a literal hellhole. Think of Brazilian favelos, mixed with dusty shantytowns and that is life on the planet. There’s little vegetation, rubble is everywhere and the landscape is overrun with desperate people. Meanwhile, life is idyllic up in Elysium. The habitat is a luxurious refuge for Earth’s richest elite with beautiful mansions, perfectly tended yards and gardens, and the best that money can buy. Including the best health systems that can rebuild damaged bodies and cure cancer. As expected, not everyone can afford to live in Elysium, even though everyone on the ruined Earth want nothing more than to go to the habitat.

Elysium stars Matt Damon as Max Da Costa, a former criminal who wants to eke out an honest living as a laborer at a robotics factory. His ultimate dream is to be able to afford a ticket to Elysium. It takes an industrial accident to accelerate that ambition. Max is dying of radiation poisoning and like everyone  living on Earth, there is little that can be done to help him. Max’s only hope is to somehow make it to Elysium and its miraculous medical services.

In a desperate move, he offers his services to a local crime boss that he once worked for named Spider (Wagner Moura). One of Spider’s illegal activities is to try to ferry Earth citizens onto Elysium.  Usually, these efforts fail, thanks to the diligence of Elysium’s defense secretary Delacourt (Jodie Foster).

She is willing to go to extremes to keep out riff raff from Earth, which includes having illegal shuttles shot out of Elysium’s skies. After the latest round of shuttles are destroyed, killing dozens of people, the president of Elysium (Faran Tahir) warns her that her job is in danger. Angered by the politician, Delacourt arranges for a coup to replace him by having the habitat’s computer system rebooted. She enlists the services of John Carlyle (Willaim Fichtner), the CEO of Max’s company, to develop a software program to carry out her coup. This program, along with other valuable data like bank codes, are stored in Carlyle’s brain.

Enter Max. Spider wants him to steal software information from any high-level executive’s brain to get rich. He has an exoskeleton and cybernetic implants surgically attached to Max, who targets Carlyle because he blames him for his dire situation. After shooting down Carlyle’s shuttle, Max is able to download Carlyle’s data, but winds up being targeted by Delacourt’s favored mercenary, a nutjob called Kruger (Sharlto Copley). This merc is a true sociopath, who reeks of barbaric lunacy. There hasn’t been a villain this insane or vicious on film since the Joker in The Dark Knight. END_OF_DOCUMENT_TOKEN_TO_BE_REPLACED