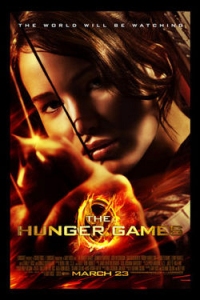 “Up, up, up. It’s going to be a big, big, BIG day!” This was how I started the morning of March 22, 2012; almost expecting to wake up to a knock on the door by the manically upbeat Effie Trinket herself. Instead it was by my fellow fans getting ready for the midnight premiere of The Hunger Games. For months we had been eagerly awaiting the movie release based on the popular and controversial young adult novel of the same name by Suzanne Collins. We couldn’t wait to finally see District 12, the gritty Hob, the dreaded arena, the wickedly fashionable Capitol, and just how much violence would make it into a PG-13 rating. As a Panemaniac myself, I was excited to see if the book-to-screen adaptation would burn like an inferno, or fizzle out into ashes.

I was drawn into the futuristic dystopian world that Collins had created in her book, where reality television has taken a twisted new edge to entertain its audience with a blood sport. In The Hunger Games, Panem is a nation in what used to be known as North America. It consists of twelve districts and ruled over by a totalitarian government from the Capitol, located in the Rocky Mountains. As a punishment for a long-past, failed uprising, once a year each district must hold a lottery to chose one boy and girl between the ages of 12 to 18 years old. These “tributes” are forced to compete in a nationally televised event called “The Hunger Games.” Like gladiator games enjoyed in ancient Rome, the tributes not only have to battle one another, but any lethal obstacle thrown at them by the Gamemakers. Twenty-four contestants enter the arena, but only one can survive to be the winner.

We follow the journey of Katniss Everdeen, a sixteen-year-old girl from District 12, a coal-mining town in the poorest part of Panem. Due to the tragic death of her father she is forced to break the Capitol’s law and hunt for game in order to save her family from starvation. In this world, the Capitol keeps such strong food regulation on the districts that many people are literally starving to death.

Katniss uses her wits and her hunting skills with her father’s bow and arrows to provide food for her mother and younger sister, Primrose. When her sister’s name is drawn for the 74th Hunger Games, Katniss volunteers as the female tribute, saving her sister, but condemning herself to death. Along with fellow tribute, Peeta Mellark, and their unstable mentor Haymitch Abornathy, they try to find a way to survive against all odds, but at a terrible cost.

I was intrigued by the author’s view of how easily a society could break down. Panem is a society that has become so desensitized by excess and ignorance that they celebrate the slaughter of innocent children as if it were the Super Bowl. Meanwhile, the districts’ citizens live without the comfort of having so much as a steady meal. I was also disturbed by the haunting idea of teenagers being taken from their families and forced to kill other children, or be killed themselves. Collins drew me into this world with her complex characters, descriptions of food and fashion, and her ultimate tale of love and just how far one is willing to sacrifice for freedom.

In anticipation for the movie, many of us showed up to the theater dressed as our favorite characters. It was the complex range of characters that really made me fall in love with this story. Right away, I was thrilled with the casting choices. Jennifer Lawrence was perfect as the tough and clever Katniss. Josh Hutcherson made us pine for the puppy dog-eyed Peeta Mellark. Amandla Stenberg as Rue, made us ache at the mere sight of her angelic face. And Lenny Kravitz stole the show as fashion genius Cinna simply by being himself. Sadly, there were a few characters that had been toned-down to keep things more suitable for the audience. Although Woody Harrelson was a convincing Haymitch, he was much more subdued than his tormented, alcoholic book version. Elizabeth Banks as Effie Trinket was not nearly as over the top as her wardrobe. Even worse, their most memorable quotes had been altered or dropped completely, leaving out major developments in their characters.

Certain adaptations by director Gary Ross were actually better than the print version. Instead of telling the story through Katniss’ inner monologue, we got to see events from multiple points of view. The charming Stanley Tucci made the Hunger Game’s emcee, Caesar Flickerman, a very minor part in the book, unforgettable. And while Seneca Crane had been little more than a name to us, Wes Bentley and his dapper Capitol-stylized beard could not have enough screen time.

The downside was the too-fast-paced speed of the film. Scenes rushed past before we could emotionally deal with them. I had hoped to see more details of certain things fans would recognize in the novel. The blood bath in the arena was not nearly as violent as what we had imagined. The deaths, while agonizing to watch were not as painful as the shaky camera work. Mostly it just ended up causing headaches. I was disappointed that Ross did not express how the people of the districts were truly desperate for food. It is difficult to get an American audience to think of what it’s like to be really hungry. And finally, the romance, or lack thereof, between Peeta and Katniss was never developed. We left the film not knowing if it just was all for the Games or not.

I was pleased with this film. It was not perfect and there were things that could have been improved, but it was an exciting ride. I’m looking forward to the story continuing in The Hunger Games: Catching Fire.