First off, if anyone reading this hasn’t seen Captain America: The Winter Soldier or the most recent episodes of Agents Of S.H.I.E.L.D. then stop reading this because MAJOR SPOILERS will be discussed. Last warning, if anyone doesn’t want to be spoiled then go and watch that excellent movie or watch the TV show online somewhere and come back here when done.

The events in Captain America: The Winter Soldier, without exaggeration, completely changed the Marvel Cinematic Universe. What happened in that movie probably has more far-reaching consequences than the alien Chitauri attack on New York City seen in The Avengers.

S.H.I.E.L.D., the elite spy agency of the Marvel Universe, no longer exists by the film’s end thanks to Captain America/Steve Rogers (Chris Evans) and his partners. It turned out that the ultra spy organization was infiltrated long ago by Hydra, the Nazi off-shoot organization led by the Red Skull (Hugo Weaving) in Captain America: The First Avenger. That revelation halfway into the film was a big WTF moment in Captain America: The Winter Soldier, especially with the disclosure that Hydra was responsible for orchestrating many chaotic and destructive events in our history since the end of World War II. This was something that is disturbing to learn given our violent history and is the stuff conspiracy fans thrive on. But in hindsight, Hydra’s malevolent influence was there in the open for everyone to see. 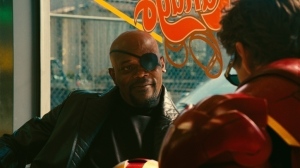 Think about it, ever since S.H.I.E.L.D. was introduced in Iron Man, there was something a bit too Big Brotherish about S.H.I.E.L.D. They seemed to know too much, had too much access as seen when Nick Fury (Samuel L. Jackson), the agency’s director, turned up uninvited in Tony Stark’s (Robert Downey, Jr.) place in the post-credit scene in that film. The man was for all intents and purposes a trespasser but everyone was too busy wetting their pants when Fury mentioned the Avengers Initiative. Then they came off as a bit nefarious with the way they coldly confiscated scientific equipment and data from Jane Foster (Natalie Portman) and her group in Thor. Their blasé attitude throughout the movie didn’t alleviate this feeling, it was as if they were untouchable and they were. In the climax of The Avengers, the World Security Council ordered a nuclear strike on New York City to stop the alien Chitauri invasion. Nick Fury refused to carry out the order, but the Council overruled Fury and had S.H.I.E.L.D. pilots carry out the order nonetheless. Being that the head of the Council, Alexander Pierce (Robert Redford), was revealed to be part of Hydra, this decision makes sense since he would be fine with sacrificing the city.

As with real-life spy agencies, it would be par for the course for S.H.I.E.L.D. to be philosophically gray and murky when it came to getting their hands dirty when carrying out missions. To them the ends do justify the means; that is just the unshakable mindset of spies. Nick Fury at the beginning of Captain America: The Winter Soldier was fine with this concept. He even scolded Rogers and told him to just accept the questionable philosophy of Project: Insight and get with the program. For that initiative, S.H.I.E.L.D. constructed three state-of-the-art helicarriers that would preemptively take out human targets before they could commit any acts of terror or criminal activity. Helping the project was a computer program that analyzed and predicted the behavior and actions of prospective targets. Later in the film, Pierce ordered the helicarriers to eliminate all potential threats, which numbered in the millions and included Bruce Banner, Tony Stark, the Avengers and Stephen Strange. While those name drops are cool Easter eggs for fans they point out the fact that Pierce and Hydra’s extreme plan would’ve eliminated any resistance to their plan to instigate world order.

At one point in the film, Fury wanted to preserve S.H.I.E.L.D., but Captain America was adamant about taking down the entire structure. Unlike Fury, he saw that the organization was corrupted and unsalvageable. Even without Hydra’s influence S.H.I.E.L.D. was too omnipresent and powerful. The agency was a perfect example of power corrupts. Thus, it had to be disbanded. This decision would immediately impact the lives of many S.H.I.E.L.D. agents around the world. END_OF_DOCUMENT_TOKEN_TO_BE_REPLACED