Some of the best sci-fi books to read during the summer months are those from author Allen Steele’s Coyote universe. Starting from Coyote and concluding with Coyote Destiny, these books explore a few tried and tested themes seen in science fiction literature. Chiefly among them are the ideas of man versus nature and of man versus his government, which are first seen in the first novel of the series Coyote. Subtitled “A Novel of Interstellar Exploration” this book deals with a group of space colonizers who rebel against an evil American government in the late 21st century and like the early pilgrims in our history, set out for a new land or rather a new planet. 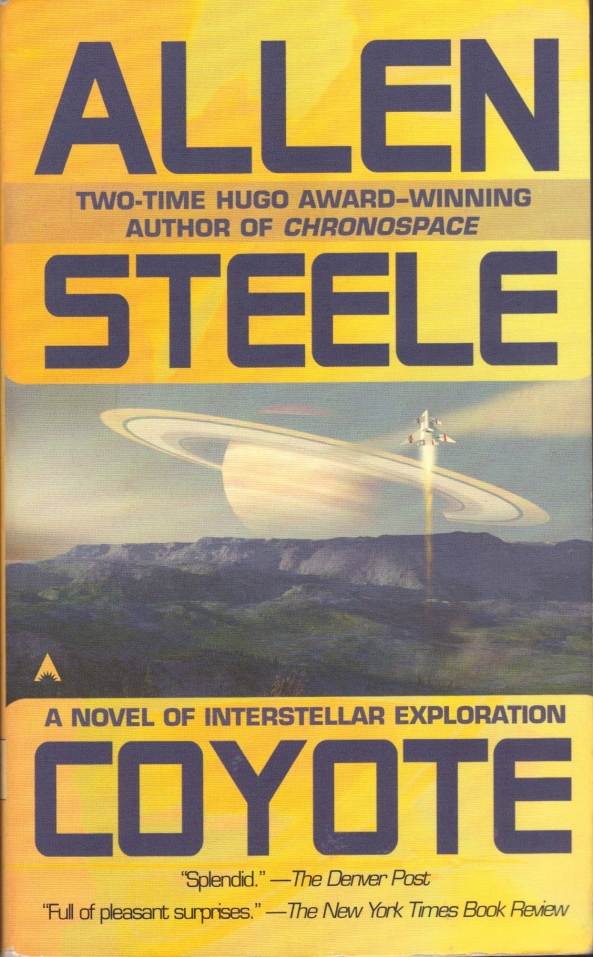 Actually this novel that was published back in 2003 is a collection of short stories that have been gathered into one book which explains the episodic nature of the novel. It’s not a complaint since each storyline while self contained and sometimes focusing on some characters does advance smoothly the overall story and gives a good perspective on the aspects of colonizing an alien world.

The book opens with the main characters on Earth. In the future, the United States has fallen and replaced by an ultra conservative dictatorship called the United Republic of America. It’s a dismal place where the government represses people, is fighting guerillas and separatists and is isolated from the world. The U.R.A. is also launching a colony starship with colonizers to its destination being Coyote, a moon that can support life and orbits the planet Bear in the 47 Ursae Majoris system. Unknown to the tyrannical U.R.A. is that the starship’s captain Robert E. Lee – – yes, he’s a descendant of the actual Lee from our history, and a group of conspirators plan to hijack the ship during its voyage. It won’t really spoil anything to say that they succeed and that the reason they do so is that his group wanted to escape the government and they figured that their destination was beyond the grasp of the U.R.A.

Before they arrive on Coyote, the novel spends a segment on the actual voyage. The starship, the U.R.S.S. Alabama, won’t reach Coyote for 230 years so the crew goes into biostatis, a type of induced hibernation. Unfortunately, one of the crewmembers, Leslie Gillis, is awakened only three months into the journey. Unable to go back into biostasis, Gillis is condemned to spend the rest of his life in solitude on board the ship or commit suicide. He chooses the former and the novel details how he spends time which was surprisingly interesting. One plot point which is brought up and so far never resolved is the fact that Gillis finds evidence of alien intelligence in the form of a passing spaceship. Steele never reveals in Coyote what was it that Gillis spotted and it’s frustratingly tantalizing.

Midway through the book, the colonists

arrive and the rest of the story deals with the hardships they face in settling in the new world. Steele wisely spends some time going over the alien environment that while Earth-like is still an alien world. It makes the world of Coyote seem like a character unto itself. One way this was shown was when it’s shown  that the world has longer seasons. This adds to the hardships the colonists face since a month lasts about ninety days so winter for instance is that much longer.

The story shifts to Carlos Montero a teenager who sets out with his girlfriend Wendy Gunther and his friends to explore the world’s vast equatorial river system. This plot doubles for a coming-of-age story which is heartfelt at times without being too saccharine. The story becomes more intense as his decision to take a Twain-inspired trip and his reckless behavior leads to death and Carlos is forced to become a man. Part of the way he does this is by his continuing the journey solo to find himself and spare his companions more hardship. The story at the same time doubles as a fascinating travelogue of Coyote as Carlos explores it and ultimately as a man makes a hard choice over what to do with his life.

From reading the novel it’s fairly obvious that it’s a retelling of our American history right up until the Revolution. The last part of the novel is a set up for the sequels. Another starship arrives and brings humans ready to share the spoils in the world the characters worked so hard to settle. This, of course, sets up the future conflicts seen in Coyote Rising and Coyote Frontier. The final two books in the series open up the Coyote universe as contact is made with alien civilizations. This premise spun off a trio of novels that largely take place away from Coyote: Spindrift, Galaxy Blues and Hex. Those books themselves are just as fascinating to read. On the whole, all these books are well written, never dull and are definite page turners. In other words, prime summer reading for sci-fi fans. It will take a while to go through all of them, but it’s best to start with Coyote, the one that started it all. With this first book, readers will easily find that Allen Steele has created an engaging story, world and cast of characters that warrant these sequels and spinoffs.