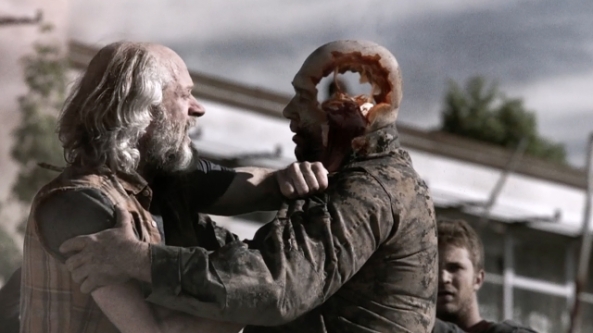 There’s this really great show on TV right now. It’s got a terrifying premise, riveting storylines, memorable characters and it’s full of nail-biting scenes and moments of pure horror. That would be The Walking Dead…then there is this show; Z Nation, which has none of the above qualities.

When I first heard that Syfy was going to air this new show, I was excited. Given the runaway success of The Walking Dead, I wondered why it took so long for another TV show to come out with a similar premise of a zombie apocalypse. But then I learned that Z Nation was produced by The Asylum, the production company responsible for all those grade zero schlocky movies that airs on Syfy on Saturday nights.  You know classics like Sharknado and Mega Shark Versus Mecha Shark.

Still, I kept an open mind, maybe Z Nation might actually be decent. It’s got a decent premise: survivors of a zombie apocalypse have to travel across the U.S. to deliver to a med research base a person who is immune to the zombie versus that has decimated the world. But nope, the show is crap.

As expected with productions from The Asylum, Z Nation looks cheaply done on the fly with amateurish CG. Most of the acting is awful and the dialogue is atrocious and inappropriate at times. Half the time, the wooden characters bark clichés and lazy one-liners that ruin the supposedly dour mood of the episodes. It’s like the actors know that they’re in a crappy production and have a “hell with it” attitude. 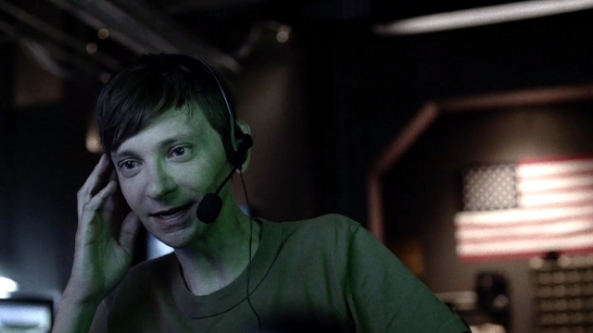 The only actor that stands out in this troupe is DJ Qualls, who isn’t part of the main action. He plays Citizen Z, the last surviving communications soldier at an arctic NSA outpost codenamed Northern Light. As the survivors trek across the country (at this point, they’re situated in the northeast), he keeps in touch with them via radio and phone calls. Since he’s isolated from the main action, his scenes allow for some exploration on the themes of isolation and for the most part they work. He had an interesting story in the second episode when he encounters a dog and befriends it. It’s just too bad the show cuts away from him to focus on the survivors and their moronic actions.

Maybe Z Nation would be more bearable if the characters were more interesting or likeable. It’s bad enough that the man who holds the key to curing the zombie plague is such a tool. He is portrayed by Keith Allen and boy does he overdo the selfish jerk routine. Meanwhile, most of the other characters don’t want to be bothered with this mission, yet they still follow the orders of Garnett (Tom Everett Scott) a former National Guard who takes it upon himself to deliver Allen’s character to California. It’s all just an excuse for the characters to find ways to kill zombies. 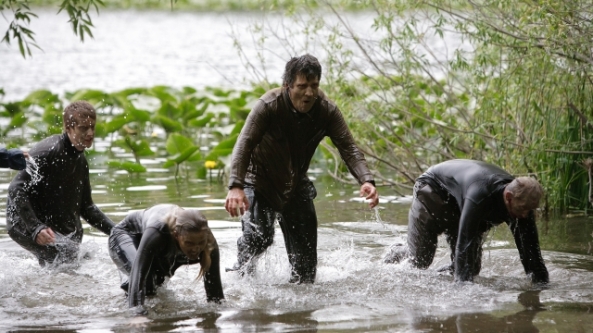 With that said, the show is rarely dull, it moves quickly. From the way the characters behave and talk, it seems like Z Nation is trying to be intentionally tongue-in-cheek.  I just wish it was actually funny. There are fans of works from The Asylum and they’re the only ones who may want to tune in to Z Nation, but everyone else should just watch The Walking Dead for a good fix of zombie action.