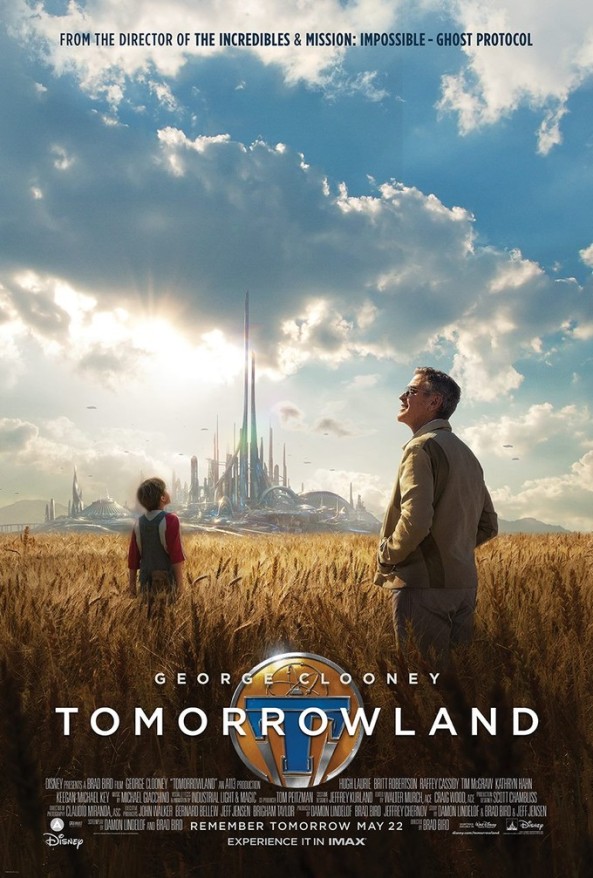 Tomorrowland is a bright, sometimes wondrous spectacle that shines in spite of its flaws. Thanks for that goes to director Brad Bird who continues to demonstrate why he is one talented director. Tomorrowland has so many fantastic merits: acting, cinematography, special effects and it’s a fast-moving adventure that celebrates optimism. With all it has going for it, it’s unfortunate that a sometimes pedestrian script grounds this film at times, particularly in its final act.

Tomorrowland begins with the story of Frank Walker (George Clooney), who as a child attended the 1964 World’s Fair in New York. Disney fans will delight with these scenes, which are a fond tribute to the genius of Walt Disney as the basis of well-known theme park rides are presented. At the fair, he meets this mysterious young girl called Athena (Raffey Cassidy) who gifts him with a pin that has the Tomorrowland symbol on it. That pin turns out to be an entry way of sorts to another realm where a beautiful, futuristic city is located. 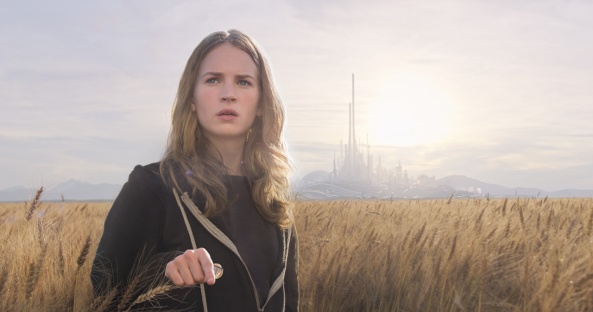 Then the film jumps to the present and introduces the other major character Casey Newton (Britt Robertson), a teenage girl living in Cape Canaveral who laments about the demise of NASA and the pessimistic nature of our world. She is baffled that so many people around her, including her father, have given up on their dreams and she’s rebellious as a result. Later, she comes into possession of the same kind of pin that Frank received years ago. Only this time whenever she touches it, Casey is transported to the outskirts of Tomorrowland, the same future city that Frank visited as a youth. Her visit to this whimsical place are some of the most moving and stirring scenes that will delight sci-fi fans. The city is reminiscent of the same futuristic locale featured in the animated film Meet the Robinsons as it features nifty flying vehicles, fantastic robotic workers, gleaming skylines and people zipping through the skies in jet packs. The city is an actualized version of the Tomorrowland section in the Disney parks and it’s a hoot to behold. This is one of the best utopian places ever featured on film.

As joyous as is her visit, it abruptly ends. Determined to go back to Tomorrowland, Casey soon meets Athena, who is still a young girl. The two of them set out to meet Frank, who is now a bitter recluse having been exiled from the future city years ago. Impeding their journey are teams of fake-smiling androids with the same plastic demeanor of a theme-park workers, who pursue them across the country with deadly ray guns. When Casey and Athena finally encounter Frank in Upstate New York, the mystery of Tomorrowland is revealed, as well as the fact that our world is imperiled. It turns out that the only person that can avert disaster is Casey herself and time is against her.

For most of the film’s running time, Tomorrowland is a captivating ride with many unexpected twists and turns just like a theme-park ride. The film is a good example of the journey being more interesting than the destination. That is because once the film actually gets to that city the script starts to come apart with lazy exposition and going overboard with the message Brad Bird and company try to present. That is unfortunate because the message about hope and casting aside cynicism is something that we all need in these times. Tomorrowland champions the themes of innovation, imagination and hope, but it should have been more stirring with its delivery. Talented as Brad Bird is, the lauding of these ideas doesn’t feel natural in its final act when its crucially needed. What doesn’t help is the revelation of the film’s villain, who lacks real teeth and a too-convenient explanation of what is going wrong. It felt very tacked on and robs Tomorrowland of the tension and mystery it was building towards.

Still, Tomorrowland does a fine job of involving viewers in the story of a youthful optimist and an older cynic. Casey’s journey is engrossing and full of adventure, but what truly resonates is that through her and Athena Frank learns to dream again..and to hope. It’s that message about hope that resonates with Tomorrowland and gives one reason to look forward to the future, and to work for an optimistic vision.