Jurassic World is what a great summer film should be! After the disappointments of Avengers: Age of Ultron and Tomorrowland, Jurassic World comes roaring along and shows everyone the meaning of the term summer blockbuster. It’s everything that a film of its type is supposed to be: exciting, awe-inspiring, adventurous, and sprinkled enough with messages to go with the popcorn. It’s rather amazing to think that the fourth film in a franchise would reinvigorate it especially when the last film in the franchise, Jurassic Park III, signaled that the film series had run its course. Jurassic World takes place over twenty years after the first Jurassic Park. That failed dinosaur theme park from the first film has been reborn as the mega successful Jurassic World. Yet, despite the park’s popularity, the owners are concerned with keeping the park profitable. To remedy this, some bonehead comes up with the idea of genetically creating new species of dinosaurs as if regular dinosaurs weren’t spectacular enough for the masses. 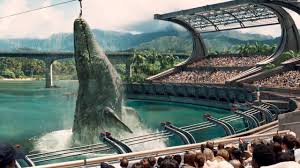 Actually this train of thought is bored easily. A case in point is when two of the film’s young characters Gray Mitchell (Ty Simpkins) and his older brother Zack (Nick Robinson) visit the park. In one valid in the film. One observation made by the film is that our society is rather fickle and scene they’re at an aquatic stadium similar to what we find in SeaWorld. The star attraction is a huge Mosasaurus , while Gray is excited to see this gigantic leviathan chomping on shark bait, Zack is distracted with his smartphone. That is so true with many people today, they’re only interested in what’s next. And it’s this mentality that leads to disaster in Jurassic World. The two siblings could’ve been your typical annoying kid characters, but they actually work. Through them, we empathize with their wonder and vulnerability. One of the best moments is early in the film when Gray first enters the park. The famous John Williams score adds to the rousing feeling as he takes in sweeping views of the world-class resort. We don’t see any dinosaurs but the scene is supposed to evoke the joy and wonder that a young child has when first

visiting a theme park. Think about it, when first entering these parks, a visitor doesn’t automatically see the star attractions, but the visitor is mesmerized by the architecture and the promise of what’s to come. Director Colin Treverrow is able to convey this POV and makes us wish the park actually existed. Later, when the boys are imperiled by rampaging dinosaurs we feel their fear. Some of those tension-soaked moments come close to rivaling what Steven Spielberg accomplished with the early Jurassic Park films. Even though he can’t capture Steven Spielberg’s magic touch with the camera, he gives it his all.

Anyway, to keep enticing visitors the park’s owners have a new dinosaur created in their labs, the Indominus rex. It’s a mean, pale, towering behemoth that is a Tyrannosaurus rex and Velociraptor mix on steroids. As in the first film, the scientists meddled with nature and in trying to make cooler dinosaurs created a nightmare. The I-rex turns out to be unusually intelligent and lethal. Demonstrating this is how it’s able to use camouflage and trickery to enable an escape from its compound. Once it breaks free, it goes on a sadistic killing spree and murders dinosaurs and humans alike for sport. This isn’t your typical dinosaur running amok. The Indominus rex is one of the best dinosaur creations ever seen on film and is certain to be regarded as a classic monster. By the way it so easily outwitted and outfought humans, it was hard to be certain that the good guys would win. Plus, the film allowed time to have the characters and audience mourn for a dying sauropod, an unfortunate victim of the I-rex. It was a good touch.

However, even though the Indominus rex seems unbeatable, the park’s ace in the hole is Owen Grady (Chris Pratt), an expert Velociraptor handler. He is hands down the best and most interesting character. Grady is cool, savvy, and of course, no one in charge listens to him. Often, he knocks heads with the park’s operations manager Claire Dearing (Bryce Dallas Howard), who is the Mitchell boys’ aunt. She is the typical corporate shill that only cares about profits. But she changes her ways as the film progresses and she 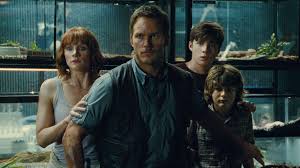 finds out that the new dinosaur is out of control and her lost nephews are in harm’s way. The banter between her and Grady was surprisingly funny in a cornball, cliché-ridden way but it was funny at times. There was this scene where she and Grady are tracking the boys and she’s running around the jungle in a business suit and high heels (and it’s film miracle that she is able to outrun dinosaurs in the heels). To show that she is willing to get rough to find the boys, Dearing hysterically adjusts her suit by rolling up the sleeves and loosening her jacket. Some may find all this eye rolling but it worked. The film is chock full of implausibilities like Dearing’s high-heel jungle sprints. Consider that the park’s owner (Irrfan Khan) is the only person capable of flying a helicopter and as CEO is allowed to take part in an assault of the I-rex. Then there is unbelievable fact that the boys are able to jumpstart a jeep left rotting for twenty years with old gasoline! Or how about cell phones and radios that never work when they’re needed? Adding to this is InGen security expert Josh Hoskin’s (Vincent D’Onofrio) outlandish idea to weaponize Velociraptors. These are not guard dogs but unpredictable wild animals as he soon finds out. Still it was an interesting subplot about the military applications of genetically created dinosaurs. This could be a direction that a sequel can explore.

One of Jurassic World’s best features were naturally the Velociraptors that Grady handled. Through hard work, he has limited control over the dinosaurs, but it’s precarious. Nevertheless, one fist-pumping moment is when he takes off in a motorcycle at night to hunt the I-rex and the raptors join him like a pack of dogs. Unfortunately, it all backfired for the humans because being that the Indominus rex was part raptor it was able to assume an alpha role and had the raptors attack the human hunters. But despite their betrayal, the raptors, led by one called Blue, in the end turn on the I-rex in the climax. And boy was that one epic battle, especially when Dearing unleashes a Tyrannosaurus rex to join in the fray. It was a tribute to those epic kaiju films where monsters like Godzilla, teamed up with Rodan and others to fight Ghidorah. That fight had one of the film’s final messages which was by working together two different parties were able to survive. Jurassic World is a great gem of a surprise. It may not be in the same league as the Spielberg films, but it’s a tremendously enjoyable romp that shows that the world of Jurassic Park still has much to offer viewers. José Soto