The latest sci-fi TV show Colony, which airs on the USA Network, is a familiar yet interesting take on the alien conquest trope. Created by Carlton Cuse and Ryan J. Condal (both are also the executive producers along Juan Campanella and series star Josh Holloway), it takes place in Los Angeles less than a year after the world presumably was invaded and conquered by an unknown force. Colony doesn’t come out and say Earth is under control by aliens since we never see the invaders but it’s implied. The skies are patrolled by these alien-looking drones that shoot energy weapons and Los Angeles and other cities are cut off from each other with giant walls that would make Donald Trump salivate.

The villains in Colony are the human collaborators led by Alan Snyder (Peter Jacobson), the proxy governor of the L.A. Bloc and he comes off as a spineless weasel. These collaborators argue that humanity has little choice but to cooperate with their “Hosts” or the repercussions will be dire for the world. Working through the Colony Transitional Authority, a warped version of the Department of Homeland Security holds L.A. under military rule with human shock troops called Redhats (for their bright red helmets) that keep order through strong-arm tactics and brute force. Violations of nighttime curfews incur death, speaking out against authority and the “Hosts” lands you in jail or worse: a sentence to The Factory, though so far, it’s not shown what happens if you’re sent to The Factory.

As these sci-fi stories go, there is a human resistance against the authoritarian rule. Made up of ordinary L.A. residents, they do what they can against hopeless odds as the collaborators hunt them down to keep the “Hosts” from retaliating against

humanity. One family is caught up in this struggle. The family head is Will Bowman (Josh Holloway), a former Ranger and FBI agent and at the start of the show, he lives under another name to avoid attention from authorities. In the pilot episode, Will is captured trying to sneak out of Los Angeles to go to Santa Monica because one of his sons is stranded there. Will is offered a position by Snyder to work for the Redhats and help hunt down the resistance leaders or have his family sent to The Factory. He reluctantly agrees, but Will doesn’t know that his wife Katie (Sarah Wayne Callies) is actually working with the rebels. So, Colony has at its center that Will is forced to work against humanity in order to find his son and keep his family safe, while he unknowingly provides intel to his wife, who has to deal with unsympathetic rebel leaders who only see her and her husband as assets to be used.

We’ve seen this kind of situation before, such as with the terrible V remake a few years ago, but here it works. That is because Colony focuses on the characters and the hardships they face living under military occupation. It’s a dilemma that can easily be transplanted into another time and era. This could’ve been occupied France during World War II and the showrunners wisely chose to concentrate on this angle. It surprisingly has many gray areas, 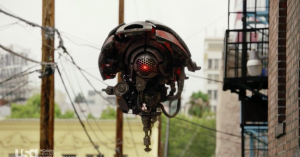 for instance, it’s shown that the collaborators aren’t one-dimensional villains cackling over L.A. residents. They genuinely fear the “Hosts” and want to get the best deal for humans while they enjoy living privileged lives in the Green Zone. A well-done example of this was with Will’s supervisor Phyllis (Kathy Baker), who at first came off as a mean, cold dragon lady type. But over the course of a couple of episodes we learned that she wasn’t thrilled with humanity’s lot but felt that getting along with the conquerors was the only option. However she wasn’t inhuman, she protected Will when some incriminating evidence was found about one of his sons, then when we think she may be OK she tries blackmailing Katie. That’s not all, when Phyllis goes home after work, we find out she’s caring for an invalid husband, which explained why she’s so cooperative with the “Hosts”. Meanwhile many of the people running the resistance aren’t very likeable because they’re so cold and only see people as tools to be used and easily discarded. Will Bowman and his wife are in losing situations and forced to do things they don’t want to do, but try to make the most of it. The question is how long can they last let alone succeed in their roles? Colony is full of nuanced characters and situations that rises above its standard formula.

What also keeps things intriguing is that we don’t know the entire situation with the invaders. Are they aliens? Or extradimensional beings? What is their agenda? By not showing the “Hosts” at all (even the villainous characters like Snyder haven’t ever seen them), viewers are automatically intrigued. Then there

are the casual visual cues that the city is different like the lack of American flags, off-the-cuff comments about the “Arrival” and how L.A.’s defenses were destroyed within hours during the “Arrival”, and the oppressive looking walls that tower over skyscrapers. Honestly, it would be best for Colony if they keep the background murky and give viewers tidbits as the struggles of the Bowman family and other L.A. residents are unfolded. Plus, aside from the CG shots of the drones, the show must be relatively inexpensive to produce, which should keep it around for awhile and hopefully the answers will be provided in a natural fashion.