When it comes to ornaments, Star Wars may be the big thing given the abundance of Hallmark ornaments that are all over the stores now. However, Star Trek fans know all too well that their beloved franchise started the Hallmark ornament craze back in 1991 with the release of the original Enterprise ornament.

Over the years, Hallmark has made some truly beautiful Keepsake ornaments about Star Trek and that tradition continues. While the amount of ornaments available may pale when compared to Star Wars, there is solid demand for Star Trek Hallmark ornaments and it looks like it be with us for a long time.

This light up feature has been with the ornaments from the very beginning and hopefully will remain with future ornaments. But one problem with the older ornaments (and this applies to the earlier Star Wars ship ornaments) is that they had to be screwed into the light socket of a Christmas tree light. There is a limit to how many ships you can do that with and it’s a real pain to yank out a light bulb, stick in the ornament plug then replace the bulb at the end of the Holiday season. Also the lights have changed over the years necessitating having to use adapters.

The newer ornaments instead come with batteries but now the ships won’t stay lit continuously. But it’s a good solution and Hallmark should give serious thought to re-issuing the older ornaments like the Romulan warbird or the Enterprise-E with this feature.

As long as there are the fans and the creators at Hallmark can come up with new ideas each year, the Star Trek ornaments will be a mainstay in any fan’s Holiday wish list.  And yes, they make wonderful gifts for Star Trek fans. Listed below are the ten best Star Trek ship ornaments and the ten best character/diorama ornaments.

9. Lt. Commander Worf (1999): The mighty Klingon is ready to fight in this striking pos and it’s one of the best sculpted character ornaments.

6. The Needs of the Many (2015): From the final moments of Star Trek II: The Wrath of Khan, Spock’s farewell to Kirk evoked the sad passing of Leonard Nimoy.

5.  Star Trek II: The Wrath of Khan (2007): This diorama ornament lets you relive the confrontation via viewscreen between the Enterprise and the Reliant.

4. Locutus of Borg (2005): What makes this ornament stand out are the bright lights of Locutus’ station, which goes well in a Christmas tree.

3. Transporter Chamber (2006): No one can stop pressing the button on this ornament to hear the sights and sounds of the transporter in action.

2. City on the Edge of Forever (2004): The first Star Trek diorama ornament is still one of the best looking ones as Kirk and Spock dive through the Guardian of Forever.

1. The Trouble with the Tribbles (2008): True story; yours truly inspired this ornament. Years ago I used to leave comments on the forum Trekbbs.com. Some of the threads were about a wish list for ornaments and I left a reply that Hallmark should recreate the iconic funny moment in “The Trouble With The Tribbles” where Kirk is flooded with hundreds of tribbles. Lo and behold, a couple of years later this ornament comes out and on another thread on the site about ornaments, I commented that someone at Hallmark must be reading the forum. To my surprise someone replied to my comment stating that he or she was a sculptor at Hallmark and usually perused the forum for ornament ideas. You’re welcome. I’ll take one of those rare convention ornaments as a reward, please.

10. U.S.S. Enterprise “pilot version” (2016): Another re-issue of the Enterprise is highlighted by its shiny gold covering to commemorate Star Trek’s 50th anniversary.

TIE 9. U.S.S. Enterprise-C (2015)/Klingon Battle Cruiser (2009): This Enterprise is the most underrated ship ornament, while the Klingon ship looks quite imposing hanging from a tree branch.

8. Romulan Warbird (1995): Its large size and greenish tones/lights make this one of the best looking Star Trek ornaments.

7. Klingon Bird of Prey (1994): This ornament surprisingly blends in well in Christmas trees thanks to its colorful detailing and lights.

TIE 6. U.S.S. Enterprise (2006)/ Delta Flyer (2002): For those who couldn’t get the original Enterprise, and the Delta Flyer is the best of the obscure ship ornaments.

5. Deep Space Nine (2001): This larger than normal ornament allows you to hook on mini-ornaments of Star Trek ships to its pylons.

3. U.S.S. Defiant (1997): A personal favorite recreation of one of the best looking and hardiest Star Trek ships. 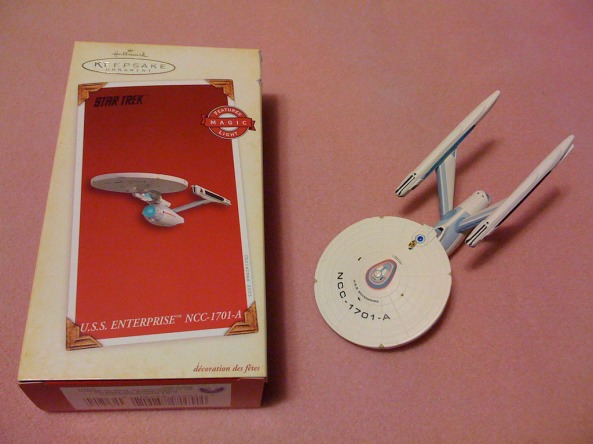 2. U.S.S. Enterprise-A (2005): The first ornament to require batteries to operate and a lovingly detailed replica of the best movie ship. 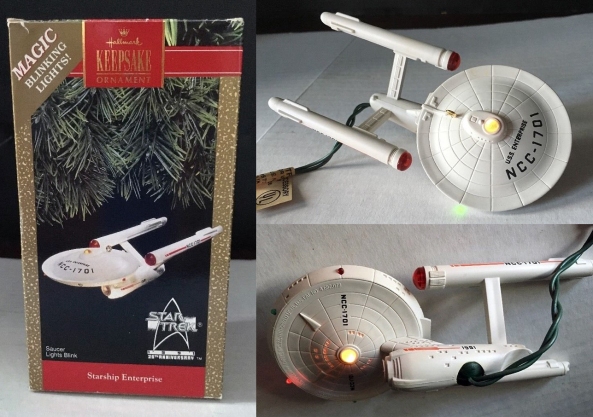 1. U.S.S. Enterprise (1991): The one that started it all is still the best and most prized Star Trek ornament. Trying to find one at a reasonable price online or in a convention is a feat unto itself but it’s worth it because it’s the Holy Grail of Star Trek ornaments.  The other ornaments that followed may be more detailed and more refined than this Enterprise ornament but this one holds a special charm in its elegance and function. A definite must-have for any collector.

For a while we were all in a dry spell of trailers. Usually by this time of the year, we would’ve been exposed to cool trailers for upcoming films. But sadly the only thing we’ve had of late was a trailer for the reboot of The Mummy. “Yawn”

Thankfully, that all changed when this scrumptious trailer for Guardians of the Galaxy, Vol. 2 dropped a few minutes ago and not a moment too soon! It may be labeled as a teaser trailer, but don’t let that fool you, we had one already back in October. That one was an actual teaser that didn’t reveal anything about the plot, just a few quick glimpses of our favorite space heroes (sorry Luke and Kirk).

Actually this trailer follows the same format. Only this time instead of Star-Lord/Peter Quill and Drax, the featured characters are the scene stealers Rocket Raccoon and Groot. Rather, that is Baby Groot and the adorable little seedling upstages the caustic Rocket with his squeaky voice. Of course, he only utters “I am Groot” but it’s all in the delivery! Not only is Baby Groot so cuddly but he’s a little badass! Look at the way he chases after the bad guy, it’s the stuff of a Looney Tunes cartoon!

This time, more action and thrills are shown, including giant space monsters and spaceship battles. Plus, we get our first look at Mantis and she looks awesomely seductive and alien! Guessing from this trailer, we’ll probably get a couple more character-centric trailers. Gamora is next, along with Yondu and Nebula. Maybe they’ll mix it up and feature Star-Lord again as he meets his father, who happens to be Ego the Living Planet as played by the great Kurt Russell. Anyhow, this trailer just whets our collective appetites for next summer and it’s clear that Marvel Studios has another winner in its hands with Guardians of the Galaxy, Vol. 2. So, hey Marvel, how about giving us a look at Spider-Man: Homecoming and Thor: Ragnarok? Don’t worry, those are sure to drop soon as are trailers for hotly anticipated movies for 2017.

But for now, kick back and enjoy the Rocket and Baby Groot antics in the latest trailer for Guardians of the Galaxy, Vol. 2. It’s very funny and we could all use a good laugh in light of recent events in the real world.

Editor’s Note: We asked two of our staff writers/geeks, C.S. Link and T. Rod Jones,  to opine on the “epic” four-part crossover event at The CW that covered Supergirl, The Flash, Arrow and Legends of Tomorrow. Here are their quick thoughts.

CSL: Basically, the entire event was a Four(three)-Part crossover. The CW’s crossover event linking its four superhero shows is now over. Overall, I enjoyed the story and interaction between the different characters. But it should be known that the 1st part that started with Supergirl only encompassed the last minute of the show when Barry Allen and Cisco Ramone show up at Kara Danver’s apartment through an interdimensional portal.

TRJ: Yeah, that was kind of a lame way to start off the event. Seriously, the entire story on Supergirl didn’t have anything to do with the main story on Arrow’s Earth. If you’re not a fan of Supergirl (and I’m not), if you skipped the first part, then you didn’t miss anything. Hell, that last minute of Supergirl with Barry and Cisco jumping into her apartment was actually reshown on The Flash the next night! And the worst part is that  during most of the event Supergirl didn’t do much.

CSL: I think the best parts were The Flash and Legends of Tomorrow segments. They both featured good action scenes and showcased creepy looking aliens called The Dominators who seek to eradicate all meta humans from Earth. The Arrow episode was not bad at all, but it mostly took place in a shared hallucination that the aliens subjected Oliver Queen and his friends to. That episode didn’t feel central to the invasion except for the last act.

TRJ: I agree that the Arrow episode felt separate from the event (not as badly as Supergirl though) , but remember this was the 100th episode of Arrow, so in a way that whole group hallucination featuring characters who are or were in Arrow made sense. It was a way to look back at many important events in Arrow’s five-year history. They do this in comics all the time and it worked for me.

CSL: One thing I would have liked to have seen was the aliens invading different parts of the planet and causing havoc. This would have made the threat even more dangerous. As it was, the action mostly took place in locations in each hero’s respective cities. In the end, this was a good start to having the whole CW DC universe come together and seem like a truly shared universe. Hopefully the next crossover event that comes will truly have it span all 4 shows and have an epic feel and consequences to each hero’s show.

TRJ: The event only came alive in the last part of Legends of Tomorrow when they all fought the aliens. But we have to wonder why the gang didn’t bring everyone they knew into the fight. Where was the rest of Team Arrow? Why didn’t the Legends go back in time and bring in the Justice Society of America? On that note, why not use future knowledge to defeat the Dominators?

Still, it was great seeing all those heroes fighting those CGI aliens on the rooftop. Some of the Easter eggs were memorable, like how Ray Palmer commented on how Kara looked like his cousin, an obvious tongue-in-cheek Superman Returns reference. The whole event was corny but fun for us geeks.