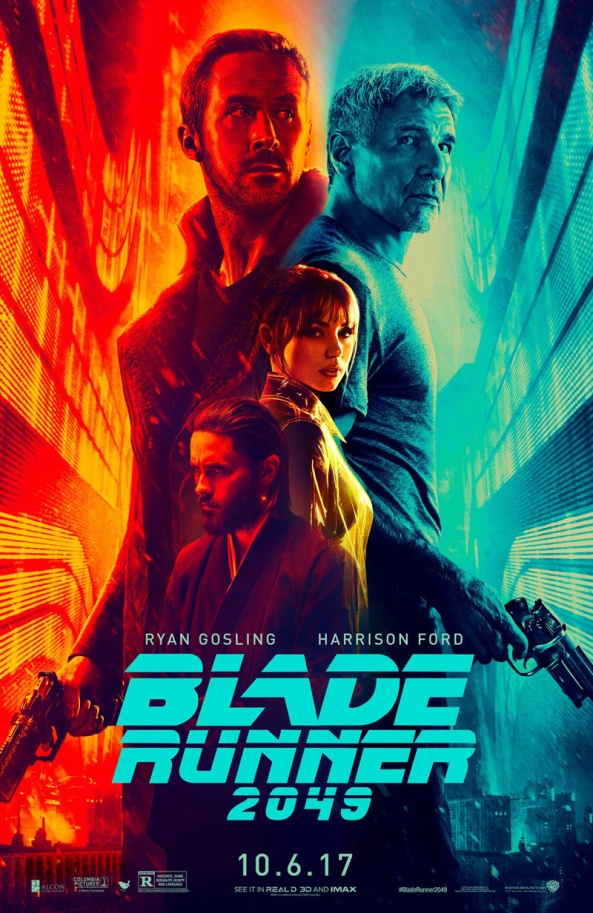 Blade Runner 2049 is the sequel to the Ridley Scott sci-fi neo noir classic film that came out 35 years ago. It takes place in the same dystopian Los Angeles introduced in the original film, which took place just two years from now, yet seems uncomfortably accurate today. Now thirty years later the world is even more ruined but further technologically advanced. Humanity is still utilizing  race of artificial humans called replicants as slave labor. Whenever a replicant escapes or rebels, special police officers called blade runners are dispatched to kill them.

In Blade Runner 2049, replicants no longer have limited life spans and are more integrated into society. However, they are still second-class citizens who are derided by humans. The main protagonist in this film is K (Ryan Gosling), a replicant who is actually a blade runner that hunts down his own kind without remorse. Early in the film during an assignment he uncovers a baffling mystery. He discovers a long-dead body and this leads him on a mission to find out more about the deceased person because it has important connotations for replicants and society itself.

Denis Villeneuve directed this sequel and he is an inspired choice for the job because his visual style and storytelling techniques are very reminiscent of Ridley Scott. The landscapes are still breathtakingly chilling with the towering and crumbling skyscrapers, large intrusive holographic advertising and constant rain, which signal the climate change ravaging our planet. Only now snow and ash pelt the inhabitants of the futuristic Los Angeles. This does not mean that Blade Runner 2049 is a copy of the original. It tells its own original story without rehashing the beats of the first film, while further exploring the theme of what it means to be human. Gosling does his usual stoic act, which fits perfectly with his soulless character. But as he digs deeper into the mystery, he comes to question his own self and wonders if he has a soul. If so would that make him human despite how he is treated?

The sequel even takes time to examine the nature of sentience with K’s holographic home AI, Joi (Ana de Armas). At first glance, Joi just seems to be a household tool to K, sort of an advanced Siri or a Google Home but with holographic projectors. What was interesting about this set up is that a subservient non-human intelligence services a second-class citizen who isn’t considered human himself by society. How K and Joi treat each other in their tender,  growing relationship formed the heart of this film and featured in its best moments.

Another highlight is Harrison Ford himself, who reprises his role in the first film as Deckard, the blade runner who fell in love with a replicant. He is a welcome face and believe it or not helps lighten the mood in this dour film. Ford’s Deckard is a reminder of a world that has been lost and only now exists as a distant, treasured memory. Although Ford is a scene stealer, Gosling with his tortured character is the focus in this film.

The most important question is about how Blade Runner 2049 compares to the original. Honestly, this is the kind of film that will be many things to many people. Already, some are hailing this as a masterpiece, while others are writing it off as dull. Bottom line, the original is the better film for several reasons. Starting with the story, the first Blade Runner had a tighter plot that was quite clear: Deckard had to find a group of renegade replicants. In this film, the mystery (and plot) are laid out but it seems more muddled and sometimes it is easy to lose track of what is going on. Later in the film, a new development occurs that is disjointed and clumsily inserted into the film. What is worse is that this development does not lead to anything and just reeks of an obvious plot thread for a sequel. This does not mean the film is dull as some are claiming. Just like the first Blade Runner, this is a slower, more contemplative film than what most of today’s audiences are used to, which is not a bad thing. Also, while it emulates the look and themes of the first film, Blade Runner 2049 fails to replicate (pardon the pun) that memorable future noir atmosphere that made the first film stand out. For a film that centers on a mystery it feels less like a detective story than the first Blade Runner. Another vital drawback is with the villain. Roy Batty so wonderfully played by Rutger Hauer was a much more realized and dimensional villain. He was motivated by a desire to be free and extend his short life span. That is something we can all identify with, which is why we mourned his fate at the end of the film. The villain in this sequel does not have a clear motivation and as a result comes off as one dimensional.

Blade Runner 2049 is nonetheless a beautifully crafted film that honors the original while being able to stand on its own. Denis Villeneuve demonstrates again why he is one of the most lauded film directors today and this is a great entry in his filmography. The film’s cinematography is simply gorgeous even though it depicts a sadly decaying world. Every shot is expertly composed and should be seen at least once in the big screen. It goes without saying that the special effects are as grand and spectacular as the first film. But these technical aspects are just window dressing for the film’s central themes about humanity and how we treat each other. Those are the film’s true highlights and what will leave the greatest impression upon audiences.