The First, which started streaming on Hulu, could have been a great space drama about humanity facing the dangers of space travel head on. In this case, the story of the first manned mission of Mars. Unfortunately, The First never gets off the ground (pun intended) and should have been aborted before a single frame of film was shot.

Sean Penn stars as Captain Tom Hagerty, a veteran astronaut who was bumped from the first manned mission to the red planet, only to be later drafted to be its commander. The entire eight-episode series is about the preparation for the mission itself and it is a slow, tepid journey to get to the launch. Unlike other space dramas like the classic From the Earth to the Moon, very little time is spent on how humanity prepares for the next, great space adventure. Some lip service is paid on who gets chosen to be on the mission, assorted malfunctions and the political machinations undertaken by Laz Ingram (Natascha McElhone), the CEO of the private enterprise fronting the mission. Instead, The First bogs itself down with boring family drama.

What takes front and center in this series is the tedious relationship between Hagerty and his young adult daughter, Denise (Anna Jacoby-Heron), who is a recovering drug addict. Hagerty’s attention is wasted on keeping tabs on his daughter, which threatens his capability of leading the mission. This is baffling. If this astronaut has so much emotional baggage why did Ingram pick him to lead a high-profile mission? We never get a sense that Hagerty is uniquely qualified. Sure, he was the first man to return to the moon since the ’70s, but it appears that Hagerty is himself a problem. Half the time, Penn looks like he just woke up from an all-night binge and after the early episodes, it is clear his heart and mind is not on the mission. 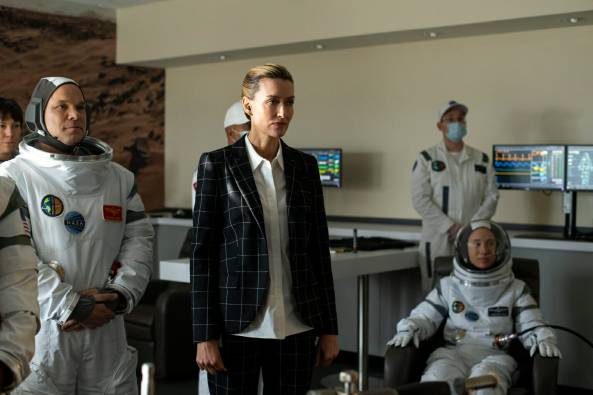 Not only is The First dull, but it is pretentious with lofty dialogue that no human being would actually say. There are numerous film-school-reject shots that don’t make sense such as scenes of cicadas emerging from the ground mixed in between overlong shots of characters looking off in the distance and ugly art images.

This is truly a shame because the pilot episode was interesting and followed the mode of what one would expect from a space drama. The production values are suitably realistic for a show taking place in the 2030s and the main theme score is truly inspiring. Sadly, it all goes downhill from there, especially when more and more time is wasted on Denise and her angst that belongs on another show.

If The First makes it to second season, it would be for the best if it focused on the drama of the mission itself and jettison all the junk family drama. Only then will it soar off the ground and captivate its viewers. Until then, watch the fictional Mars-missions series shown on Discovery and National Geographic. They’re more informative and entertaining.

4 comments on “The First Is Last As A Space Drama”