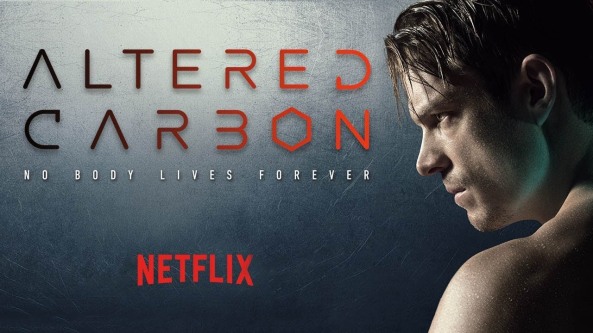 Altered Carbon is the latest example that we are living during the Golden Age of sci-fi television shows. It premiered last month on Netflix. but was mostly dismissed by mainstream critics who probably only sample one or two episodes before rendering their verdicts. However, Altered Carbon, much like its characters, is much more than it seems.

Based on Richard K. Morgan’s novel, Altered Carbon takes place hundreds of years in the future where humanity has essentially become immortal. This was accomplished with the introduction of alien technology that allowed human consciousness to be downloaded into “stacks”, devices that are implanted on the base of one’s neck. Everytime a body is near death, the stack transfers the consciousness into another body, called sleeves, with its own stack. This has a profound effect on humanity as people live hundreds of years and casually transfer onto new bodies as swiftly as we change our clothing. But this has not created a paradise. Constantly switching to new sleeves has a profound affect on the mind, soul and even society itself. This process has created a class of super-rich hedonists called meths who consider themselves to be above humankind and its morals.

The show focuses on Takeshi Kovacs (Joel Kinnamen and Will Yun Lee), a revolutionary soldier who was captured and placed into a new sleeve hundreds of years later. This new sleeve was activated by Lauren Bancroft (James Purefoy), one of the wealthiest men in the known universe, to solve his own murder. That is the recent murder of one of Bancroft’s previous sleeves. Kovacs was activated because of his reputation as an Envoy, a rebellious group that wanted to end the use of stacks. Envoys are renowned for their tough mental resilience and discipline. which is what Bancroft needs to solve his murder. 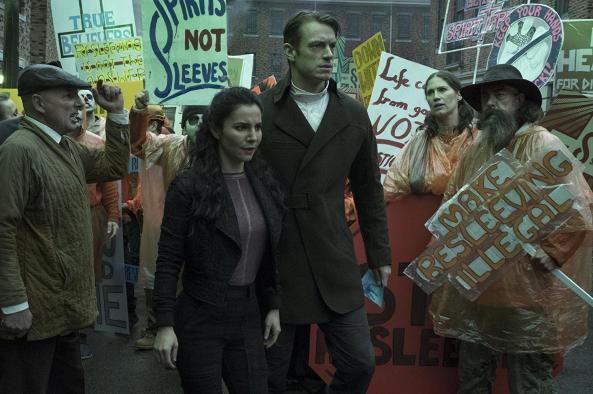 Kovacs grudgingly accepts Bancroft’s offer of indentured servitude in exchange for his freedom. During his investigations, Kovacs travels the seedy underworld of Bay City and the decadent and hedonistic lifestyles of the mega rich, while meeting an interesting cast of characters. There is Kristin Ortega (Martha Higareda), a working-class police detective with an unusual interest in Kovacs, and Edgar Poe (Chris Conner), an AI manifested as a holographic hotel manager. The show also features extensive flashbacks of Takeshi Kovacs’ previous life with people important to him, such as his sister Reileen (Dichen Lachman) and Envoy leader Quellcrist Falconer (Renée Elise Goldsberry).

Due to the nature of his job, Kovacs runs into a lot of trouble, from criminal elements out to settle scores to sadistic hitmen to unsavory VR experiences. Luckily his honed skills as an Envoy allows Takeshi Kovacs to endure his ordeals. As he tries to solve the murder, Kovacs also has to grapple with his lost, previous life and finding his way in the new life.

Altered Carbon is entrancing, exciting and quite gripping at times thanks to its stylistic and noirish, cyberpunk elements that are similar to Blade Runner and intensely violent scenes that are reminiscent of John Wick or The Raid. Each shot is captivating with rich cinematography, not to mention special effects and production design that completely sell the notion this story takes place in the distant future.

Unlike other current TV shows, while Altered Carbon can be binged watched but is not dependent on this. Most episodes seem more self-contained while servicing the main plot of the Lauren Bancroft murder case. It is something of a relief since it allows the episodes to be enjoyed individually. However, its plots can be quite dense, though in a good way, with its usage of unusual words, exposition, and plot twists that may confuse casual viewers and calls for more focused viewing.

A word of caution is warranted, Altered Carbon is extremely violent and has graphic nudity. If this was a film it would be a hard R, so it is not for the more squeamish viewer.

Getting past its grimy nature and lurid violence, it is clear that the intense scenes underline the show’s theme: that humanity is not ready for immortality. By using stacks, most of humanity takes life and their bodies for granted as seen with the way many are too quick to jump into new sleeves after injuries or to take on new identities.  In essence, they have become desensitized to violence and by being so cavalier about the sanctity of the physical body these people are losing their humanity.

Altered Carbon is a stylistic, hard-edged sci-fi yarn that engrosses you with eye-popping visuals, intense fight scenes, and captivating and tortured characters. But more than that, Altered Carbon does what a a true sci-fi tale sets out to do: to extrapolate where humanity may go.