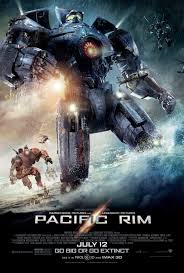 Director Guilermo Del Toro hits it out of the park again with his latest, monumental film Pacific Rim. Many will probably say that this giant monster or Kaiju extravaganza isn’t anything more than a Godzilla/Transformers mash up. Pacific Rim is more than that, which is why it’s so spectacular.

Pacific Rim takes place in the near future after an interdimensional breach on the Pacific Ocean floor unleashes gigantic creatures that destroy coastal regions. Humanity fights back by building gargantuan robots called Jaegers that are operated by two pilots. After a string of victories against the Kaijus, however, the colossal creatures adapt and begin defeating the Jaegers. This was vividly shown during an early battle where a Kaiju is killed at great cost to a Jaeger’s pilots.

When the film opens, humanity is on the verge of shutting down the Jaeger program, because they’re seen as unsuccessful. One former pilot, Raleigh Becket (Charlie Hunnman) is approached by his old boss Stacker Pentecost (Idris Elba) to come back to the program. There are only four remaining Jaegers left, and Pentecost has a plan to use them to deliver a nuke into the interdimensional breach and sealing it.

Becket is assigned to pilot the Gipsy Danger, his old Jaeger that was badly damaged in a battle years ago that took the life of his brother and co-pilot. Pentecost’s assistant Mako Mori (Rinko Kikuchi) wants to be Becket’s co-pilot but utilizing a Jaeger isn’t easy. The mammoth robots are so complex that two pilots need to operate them using a neural link that ensures a synchronized operation.  In other words, the pilots have to be compatible. Typically, Becket and Mako butt heads as both are recovering from painful memories. Meanwhile, Pentecost’s team learns that not only are the Kaiju attacks increasing, but there’s a reason behind their appearances, making it imperative that they seal the breach.

For anyone who loves or used to love those old Japanese Kaiju films that featured Godzilla, Pacific Rim is an ode to those classics. Even if you no longer watch those films, this one will reignite the passion one felt as a kid at seeing giant, misshapen monsters devastating a city. Only this time, big-budget special effects and top-notch direction enhance the experience. Guilermo Del Toro knows what works with the Kaiju films and what doesn’t. Using that knowledge he skillfully crafted this epic monster movie.

It may be difficult, however, for non-Kaiju fans to appreciate the effort. At first glance, Pacific Rim may seem like a giant monster movie with robots that is made for kids. But it’s deeper than that, unlike those old films, you care about the characters. You’re entertained by them when the monsters aren’t on screen. There are also many quirky supporting characters that sometimes provide comic relief or add something important to the plot. The most memorable of them include Ron Perlman as a slick black market dealer and two nerdy and eccentric scientists played by Charlie Day and Burn Gorman.

Another notable factor with Pacific Rim, is that we get to see what a world with giant monsters might be like. We are flooded with imagery and background details showing how things will be different. We see the use of thick emergency shelters, the presence of a black market for monster parts, and hints at how the economy has changed for the worse. These elements aren’t dwelled upon, but they are there for repeat viewing.

The highlight, of course, are the amazing battles between monsters and machines. One important difference between this film and the old Kaiju films is the special effects.

They’re practically flawless and the action scenes are well-executed and clear. Pacific Rim doesn’t have the shaking camera movements seen in those dumb Transformers movies that don’t let you know what is going on. Del Toro proves that he is a master of the camera in the way he stages these shots. The result is a thrilling viewing experience.

We’ve been teased by Hollywood of the capability of putting out a big-scale, giant monster movie. That was seen with Cloverfield and to a lesser extent 1998’s Godzilla. Pacific Rim is what the latter film should’ve been and so much more.