The second season of The Boys just finished streaming on Amazon Prime a few days ago and its final episode “What I Know” was a tense and satisfying season finale. It concluded many story arcs while paving the way to new directions in the third season. Yes, there will be a deserved third season for this great TV show.

The Boys continues the storyline from the first season of a ragtag group of powerless vigilantes (led by the always-talented Karl Urban as former merc Billy Bitcher) and their struggle against the Seven, a group of superheroes, and the corporate forces that support the Seven. 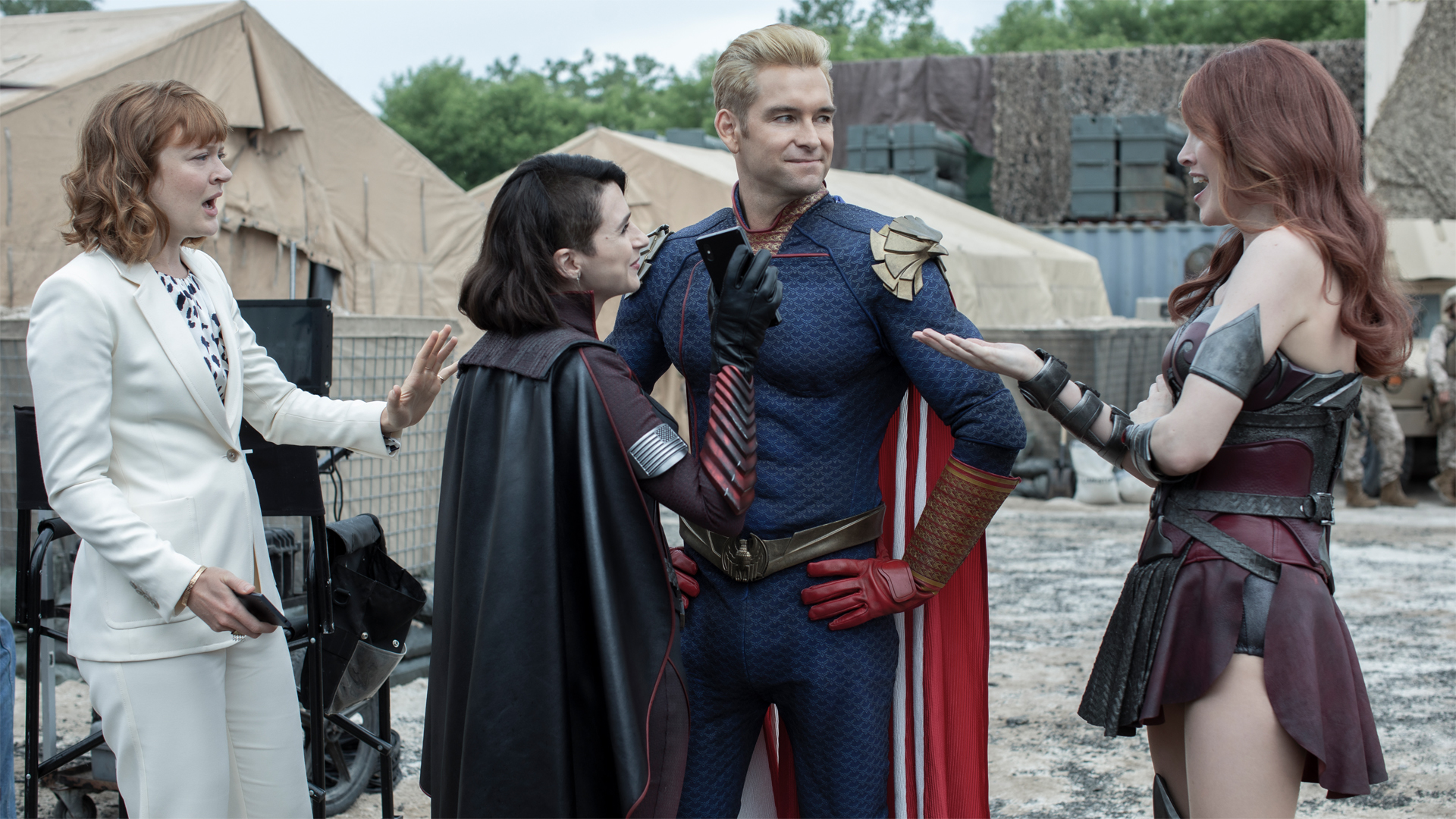 Based on the comic book series of the same name by Garth Ennis and Darick Robertson, the Seven are actually a bunch of sociopathic and flawed individuals without any redemming qualities…except for a couple of characters. The leader of the Seven, Homelander (Anthony Starr), is the worst of the lot; basically think of him as Superman without the morality to keep him in check.

Part of the appeal of The Boys, aside from its dark and macabre humor, was seeing the desperate plight of the Boys fighting against the odds to expose the Seven and their sponsoring corporation, Vought International. As it stands the Seven are huge celebrities and revered by billions, complete with corporate sponsorships and connections throughout society.

One of the more interesting plots in the season dealt with Stormfront (Aya Cash), the newest member of the Seven, who is actually a former Nazi and a terrifying presence in the show. What made her so fearful was not how her electrical-based powers made her nearly unbeatable but her violent, racist demeanor. What is worse is that Stormfront is able to successfully hide her true self and Nazi past to the general public. After killing a supposed super terrrorist, she quickly becomes the latest media darling, which Homelander sees as a threat to his own popularity. The two eventually join forces, becomes society’s latest power couple, and start spouting dangerous messages and dog whistles about super terrorists and immigrants that echoes our current, dark events.

The paths of Homelander and Billy Butcher cross in that Homelander kidnapped Butcher’s wife, Becca (Shantel VanSanteen), years ago, raped her and forced her to bear his son, Ryan (Cameron Crovetti). Becca is imprisoned in a rural home and tries to raise Ryan to be as normal as possible because the young boy is developing his own superpowers and she does not want him to grow up to be a monster like his father. However, in the second season, Homelander takes more of an interest in his son and wants him to be more like himself. This conflict between Becca, Homelander and Butcher comes to a tense and powerful conclusion in the final episode and is heartbreaking for many reasons.

Meanwhile, Butcher’s gang is trying to expose Vought by releasing information to the public that Vought International is actually responsible for creating superheroes with a substance called Compound V, which was given to infants. The full ramifications of the expose were not as thoroughly explored as it could have been in the season. That is probably because there are only so many episodes alloted to the season, but it did lead to some terrific moments such as in the fifth episode “We Gotta Go Now” when Homelander nearly loses control in front of hundreds of protesters and imagines himself killing them with his laser vision. 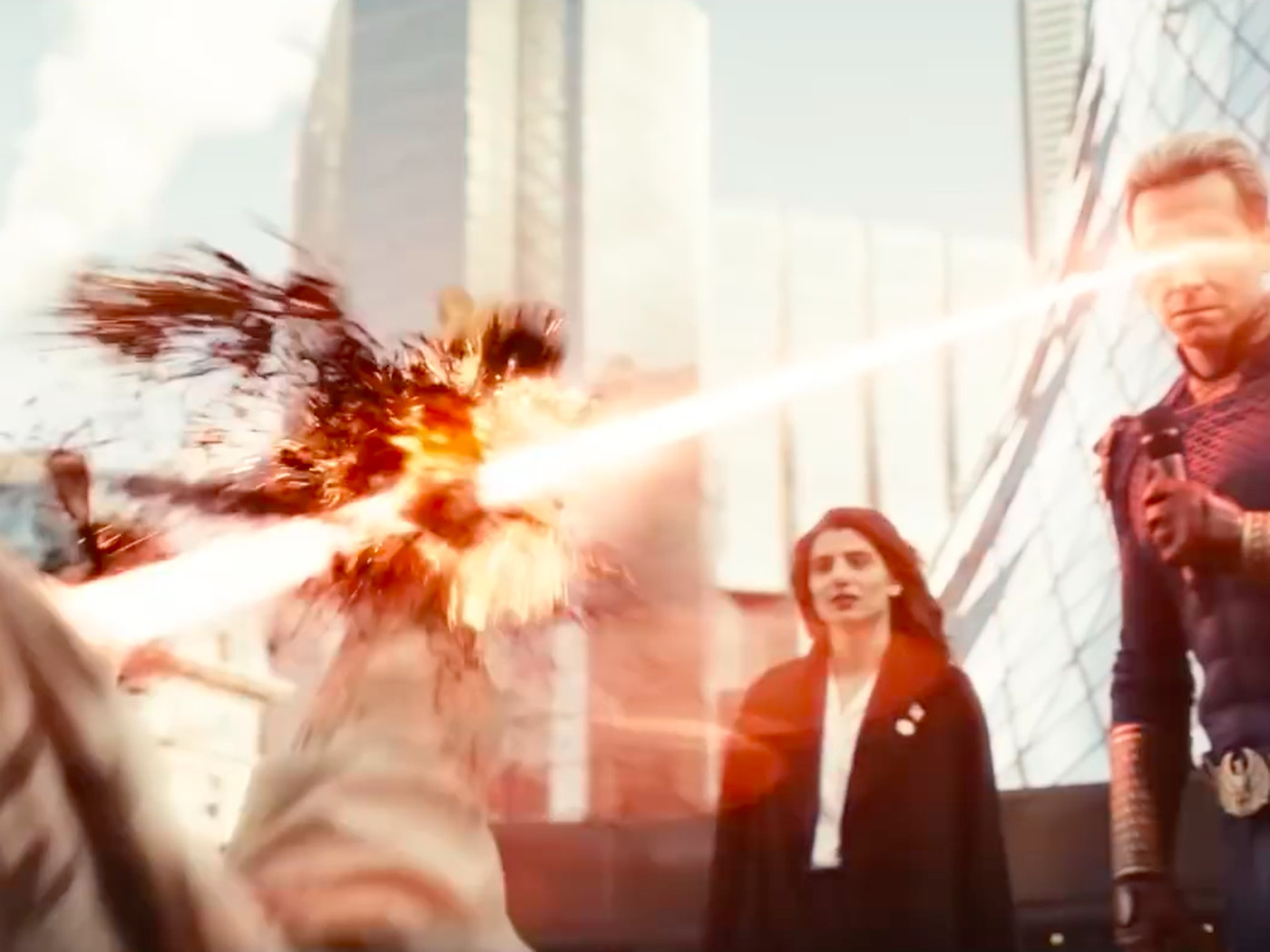 Contrasting the nastiness of the homicidal Homelander and Stormfront are Starlight (Erin Moriarity) and Maeve (Dominique McElligot). Starlight/Annie January is secretly giving information about Vought and the Seven to her boyfriend Hughie Campbell (Jack Quaid), one of the Boys, and a younger brother figure to Billy Butcher. The relationship between Annie and Hughie form the heart of the show and is fraught with danger as Annie tries to keep her ties to the Boys confidential. Meanwhile, Maeve/Maggie Shaw not only has to fight her own disillusionment with being a superhero, but she was outed as a lesbian by Homelander. Now her privacy is destroyed as she is thrust in the media spotlight. This naturally has a detrimental effect on her relationship with her partner Elena (Nicola Correia-Damude), who doesn’t have powers and Maeve knows Homelander did this to keep her in line by subtly threatening Elena.

While these personal story arcs were well done and were engaging, some characters were short changed in The Boys’ second season. Notably the other members of the Boys, Mother’s Milk (Laz Alonso), Serge (Tomer Capon) and Kimiko (Karen Fukuhara), a mute superhuman refugee. They do have storylines, notably Kimiko as she grapples with her fear of Stormfront, but so little screen time is given to them. Hopefully, they will be given more to do in the next season.

There is another percolating subplot concerning a cult, called the Church of the Collective, modeled on Scientology, that has strong sociopolitical ties. Two former members of the Seven, A-Train (Jesse T. Usher) and the Deep (Chace Crawford) become members of the church and through them we see its hypocrisy and corruptive influence. It is clear the Church of the Collective will have more screen time in the next season as will Congresswoman Victoria Neuman (Claudia Doumit), an anti-superhero politician with her own agenda.

Despite its few flaws, the second season of The Boys beats the sophomore curse of many second-season TV shows. Most of its dark humor hits the marks and its gross-out moments are truly squeamish, like the instance with the exploding heads in “Butcher, Baker, Candlestick Maker” or in “The Bloody Doors Off” where Mother’s Milk encountered a superhuman with a prehensile penis that is more of a tentacle! Needless to say the final confrontation between the heroes and Stormfront will leave everyone cheering at the top of their lungs.

What is important is that after watching The Boys’ second season, you are left wanting to see more, and thankfully we will.

As if anyone hasn’t seen the ubiquitous advertising, The Boys is a new superhero TV show streaming on Amazon Prime, and what makes it stand out from the standard superhero fest we’ve seen is that the superheroes are actually the villains and the main stars in the show are ordinary humans trying to undercut the superhumans.

In the world of The Boys, superhumans have been around for decades and are slickly marketed as celebrities to the public by the corporation Vought International. The company sells their superhumans as wholesome and patriotic heroes but the reality is that the superhumans are deeply flawed, amoral and let their power get to their heads. In other words, the superheroes feel they are above the law and act behind the cameras and campaigns without impunity.

The main “superheroes” featured in the show belong to a superhero team called The Seven, and are basically knock-offs of the Justice League, with the Superman-type, Homelander (Anthony Starr) being the worst of the bunch. He knows he is basically a god and is treated as such by the adoring public. Literally draped with the American flag, Homelander is not above invading people’s privacy, rape, and needlessly killing people. Not all of The Seven are bad. Annie January (Erin Moriarity), is a new recruit called Starlight and she genuinely wants to do good and make a difference. The problem is the harsh reality of her co-workers disillusions her and causes her to question The Seven and how their heroic actions are solely carried out to please Vought’s marketing executives.

At the start of The Boys, one person’s life is changed forever by the superhumans. He is Hughie Campbell (Jack Quaid), an ordinary salesperson in New York City. His girlfriend is accidentally killed by a speedster called A-Train (Jesse T. Usher) who was speeding towards a crime scene. A-Train shows little remorse for smashing through Hughie’s girlfriend and is more concerned about not getting in trouble and not having his reputation ruined. Hughie, of course, is enraged by A-Train’s attitude and quickly becomes disillusioned by the Supes. He meets Billy Butcher (Karl Urban), a grizzled and salty freelance operative for the CIA who hates all the Supes. Billy recruits Hughie and old colleagues/mercernaries such as Mother’s Milk (Laz Alonso), and Frenchie (Tomer Kapon) in a clandestine mission to gather intel on the Supes and bring them down. It goes without saying that the inventive and creative ways Butcher’s bunch defeats their superpowered prey is often humorous and grossly effective.

Comic book readers know by now that The Boys is based on a comic book series published by Dynamite Entertainment and created by Garth Ennis and Darick Robertson. Eric Kripke developed the show, which is executive produced by Seth Rogen and Evan Goldberg. Before the show came along, many doubted that the comic book could be adapted because of its graphic content. It was so severe that the original publishers of The Boys, Wildstorm Productions, cancelled the series early in its run because it was too anti-superhero.

Thankfully, the show has been able to capture the spiteful and dark humor nature of the comic book. It provides viewers with a wry look at how superheroes would be actually perceived by the normal public and examines the implications of superheroes in our world. It is a lot like Watchmen only with more humor and not as bleak.

Even though it only has eight episodes (Amazon Prime already renewed it), The Boys is already one of the best superhero TV shows ever shown. It out-gritted previous grounded superhero shows like Daredevil and successfully emulates that feeling of engagement that Daredevil and the first season of Heroes used to hook viewers. All the characters are well cast and intriguing, even though a lot of their actions are barbaric and will make you wince. Make no mistake, this is not a standard superhero show for kids. It is jammed with graphic violence and sex acts; much of it is strangely fascinating to watch in a morbid fashion, such as the scene where Hughie’s girlfriend is suddenly turned to pulp by A-Train. But the highlight of The Boys isn’t the over-the-top violence or uncomfortable scenes,, but the characters and their situation. We are instantly involved and drawn towards Hughie, who is the confused and angry soul of the show. He is a decent man who witnessed a terrible act and is driven to want to do something but is wracked by his conscience. Meanwhile, Billy Butcher comes off as a foul-mouthed and cynical thug who has seen it all. But deep down he is embroiled in sadness and rage over his past. Butcher channels these intense emotions towards his drive to bring down Supes, especially Homelander. While we quickly come to despise Homelander and other Supes like A-Train, other Supes like Starlight and Queen Maeve (Domminique McElligott) are much more sympathetic as they struggle with their public image and their personal feelings.

Aside from the intriguing characters, The Boys carefully unveils the evil nature of Vought International with enough grim nuggets per episode to keep you watching. The company’s actions are quite horrific given the sunny nature they project to the unassuming public about their brand superheroes. In many ways, it is a sly commentary about the media in our lives and how public perception is easily manipulated.

Along with the superhero shows on the DC Universe app, The Boys is heralding the next step in superhero TV shows. If upcoming shows like Watchmen and the offerings from Disney+ match the quality of The Boys then we are in for some must-see viewing.