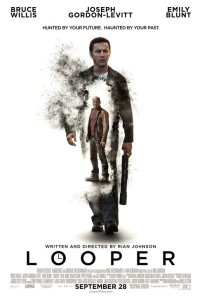 Joseph Gordon-Levitt and Bruce Willis team up the film Looper, a rather disappointing time-travel thriller, which is too bad because the potential was there for it to be phenomenal. Gordon-Levitt stars as Joe who is an assassin in the year 2044. He lives in Kansas and his job is to kill people sent bound and gagged from the future. Joe explains that thirty years from his present time travel is discovered but is instantly outlawed. The only ones who use it are criminal organizations who use it to send their targets back into the past because it is nearly impossible to dispose of a body in the future.

Joe lives a happily empty criminal life until one day he discovers that his next target is actually himself from the future. His future self is played by Bruce Willis and he does a credible job of portraying a supposedly reformed criminal that is trying to save his skin and rewrite history. When the Gordon-Levitt Joe first confronts his future self, the Willis Joe manages to escape with a mission at hand. The Gordon-Levitt Joe is targeted by his employers who now want to kill him and his future self, yet instead of going on the run, he still wants to kill his future self, hoping he will get in good graces again. This doesn’t make much sense, nor does much of the movie.

One flaw with Looper is that it adds too many subplots. For instance, the future version of Joe not only wants to stay alive but wants to do a Terminator and find and kill the child version of the

criminal boss that had him sent back to the past. Enter Emily Blunt as Joe’s love interest. She plays a farmer and a mother named Sara whose son Cid is future Joe’s target. So the Gordon-Levitt Joe hides out in her farm waiting for his future version to turn up while building a relationship with the mother and son. But the plot twists don’t end there, in the future a mutation appears among people that allows telekinesis and Cid happens to be an especially powerful mutant.

Honestly, when this development turned up, Looper strayed away from its original premise and came off as an uninspired X-Men movie. Another thing is that it’s difficult to find anyone sympathetic in the movie, even the boy Cid isn’t likeable. He looks like a perfect Damien for a new version of The Omen.  Joe is largely an unrepentant killer and drug addict. Joe’s future version is more cold blooded whose excuse for the Terminator rampage is that his future wife will be killed by Cid’s people. Unlike the Terminator films, it never is shown how bad Cid will become so no one can really root for the future Joe to kill this child. A word of caution, despite the trailers promising an action-packed spectacle, Looper has very little in the way of action. There are some chase and fight scenes but they lack energy and urgency.

Then there are the mechanics of the premise. If illegal time travel is used by criminals why are they worried about disposing of bodies, wouldn’t it be more of a crime to be caught using time travel technology that can be used to rewrite history? Why kill the targets when they come back? No one bothers to interrogate them to learn about the future, one would think that a criminal wouldn’t at least want to pull a Biff Tannen and learn sport scores to get rich! Why send them only thirty years back? The film never establishes that there is a limit to how far back a target can be sent. So why not send them to a preshistoric past or to the middle of some great catastrophe?

Looper has some good points. The production design showcasing a decaying U.S. and an opulent China was well done and it was refreshing to see a film not take place in a futuristic New York or Chicago. Joseph Gordon-Levitt also gets kudos for playing subtly a young version of Bruce Willis. Of course, he doesn’t look like the Willis we’ve seen back in Moonlighting but there are some slight resemblances and Gordon-Levitt shows enough of Willis’ mannerisms to pull the feat off. Looper tried to be different but in the end maybe someone should’ve gone back in a temporal loop to fix the screenplay before filming began.