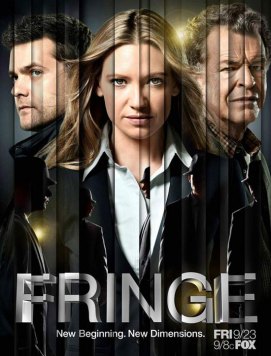 Despite its rich history, this episode “Neither Here Or There” is a bold jumping on point for new viewers. The reason for that is because of FBI Agent Lincoln Lee’s (Seth Gabel) re-introduction to the Fringe Division, which serves to explain what the show is about for anyone who doesn’t know anything about shape shifters, Observers, or amber.

Last season, Peter Bishop (Joshua Jackson),  in trying to prevent the destruction of two universes, was erased from existence which resulted in a new timeline. In this one, Agent Lee’s partner (played by Stargate: Atlantis’ Joe Flannigan) is killed by a strangely translucent man-a really disgusting effect. This leads him to meeting Olivia Dunham (Anna Torv), Walter Bishop (John Noble) and the rest of Fringe Division who investigate bizarre occurrences.

While the episode is set up to introduce new viewers to the Fringe universe, it’s also an intriguing yet subtle re-acquaintance for fans. Yes it’s a new timeline but things aren’t that different. The changes will only be caught by fans like Walter appearing a bit more unhinged than usual. Knowing the show, more clues will be peppered among upcoming episodes. But fans will note that Peter’s existence is critical and his absence should’ve made the timeline more radically different especially when it comes to the simmering cold war between our universe and the “Over There” universe that still exists.

What worked best for the episode were all the clues that weird stuff is going on, best shown with Peter’s ghostly image that literally appears in blinks and the enigmatic Observers who want to preserve the new timeline. It’s all intriguing and makes one want to learn more about what is going on and where it will all lead. Given the show’s history, it’s unlikely that it will disappoint fans. Despite its superficial similarity to The X-Files to casual viewers this program is a lot more than monsters of the week and convoluted conspiracies.

That’s why Fringe is the best sci-fi show on the air right now.