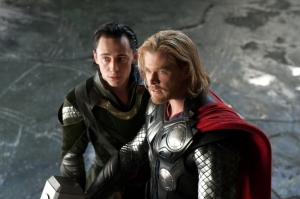 There’s the other blu-ray release this week, Marvel Studios’ Thor, which came off as a pleasant, unexpected surprise when released in theaters this past May. Why was it better than it seemed? Blame it on marketing, maybe (man did those awful heavy metal riffs at the end of the trailer nearly kept me away from the movie). But it looked very uninspiring in the trailers as some run-of-the-mill fantasy romp. Instead the film was a clever re-imagining of the Marvel character while celebrating its larger-than-life Kirbyesque landscape.

In the comic books, Thor is the God of Thunder from Norse myth. While the comics also state that he and his fellow Asgardians are more or less extra-terrestrials, this film full on states this as fact. The result is one of the more imaginative alien cultures shown on film. Basically, their technology is so advanced that it seems almost like magic to us. For example the famed Rainbow Bridge which leads to other realms is for all intents and purposes a sort of wormhole machine and it looked spectacular on the big screen.

More importantly, director Kenneth Brannaugh’s science-based vision of the Asgardian world is so rich that it fires any viewer’s imagination. Right away, I was able to conceptualize how Thor is probably genetically attuned to his hammer that is itself a probable lightning rod. Despite some misgivings from some about the Earth based scenes, which inject much needed humor, the entire effort pays off and enriches the burgeoning Marvel movie universe.

Why is it better than Iron Man? I could go on forever but I’ll just go over a few points. For starters, the villain Loki is so much better than Iron Man’s Obadiah Stane. Loki could’ve been a Joker rip off but in this film, he’s so calculating and subtle that you can’t help see his side that Thor isn’t entitled to rule Asgard. Stane on the other hand, is your average evil capitalist. Too many Marvel films have them. Another point is that with Iron Man, it takes forever for Tony Stark to actually become don his regular Iron Man armor. In fact, I believe there are only three scenes where he’s in the red-and-gold outfit and this happens after more than hour into the film! With Thor right away you see him using his powers (which is one of the main reasons he gets exiled to Earth) and actually Thor doesn’t bother with a standard origin storyline and that’s a relief. Instead the transformation into a hero has to do with Thor transforming his soul. And one last point is that Iron Man after a fantastic first hour starts to drag once Stark escapes his captors, then it’s waiting until he fights Stane. And that came off as a quickly done robotic fight straight out of a Transformers film. Not with Thor, I know some people complained about his scenes on Earth but to me it added more to his story and only made me wish they spent more time with the fish-out-of water aspect to it.

The film was a big hit and a sequel’s in the works. However, it did seem to get lost in the buzz but that’s because the market is saturated with superhero films. Add to that the crappy 3D conversion that everyone complains about (when will studios realize that cheaply done 3D results in hard-to-see film that will turn off audiences from shelling out moolah for any future films?) and that’s why it wasn’t as big as hit as Iron Man. That’s too bad, but now that it’s on DVD it’s worth a look.