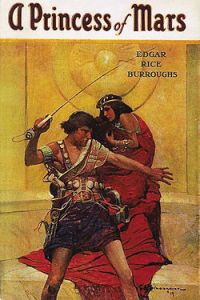 Before his famous Tarzan stories Edgar Rice Burroughs first came to the literary scene with his character John Carter of Mars. As the first modern space hero, Carter was introduced in a short story called “Under The Moons Of Mars”, which was published in the magazine The All-Story in 1912. The character returned in serialized stories that were later collected into the 1917 book A Princess Of Mars.

John Carter appeared in several other books detailing his adventures on the red planet and was an excellent example of a pulp fiction hero while being the prototype for the superhero and the space adventurer. Burroughs’ Carter books were filled with action, romance, intrigue and adventure. But to get a good feel of the character and setup start with A Princess Of Mars.

At first the novel reads like a Western due to its setting. As a Civil War veteran who fought for the Confederacy, Carter moves out to Arizona to start anew. Before long, he runs into conflict with an Apache tribe (which parallels his adventures to come). These early parts can be a bit slow for a reader wishing to explore a science fiction world, but be patient. Before long, while seeking refuge from the Apaches, John Carter finds himself transported mysteriously to Mars or rather Barsoom as the natives call the planet.

Then the fun stuff happens. In the Martian desert he encounters the Tharks, a tribe of giant, four-armed, Green Martians who live a barbaric, nomadic existence. He has little regard for their savage ways but he earns their respect thanks to his prowess. It just so happens that the lighter gravity on Mars has granted Carter superhuman strength and agility. So he amazes the Green Martians with his Hulk-like leaps and fighting skills. Carter proves his worth to the Tharks and rises in the ranks by killing off several warlords and surviving ordeals.

Along the way, he earns the friendship of Tars Tarkas, a mighty Thark chief with a hidden sentimental side, Sola, an unusually kind female Green Martian, and Woola, a large guard animal akin to a dog but much larger and meaner.

But the most important relationship he develops is that with Dejah Thoris, the princess from the book’s title.

John Carter first meets her when she is taken prisoner during a raid on her air ship. Dejah Thoris is humanoid, part of a race of Red Martians at odds with the Green Martians and each other. While slightly more civilized than the Green Martians, the Red Martians are the remnants of a once-mighty culture that occupy decaying cities near the planet’s canals.

The sparks fly when the two meet. Reading about how fiery and beautiful she was can make any young teenage boy swoon with longing. And the passages detailing their blossoming love are quite well-written and don’t slow the story down at all; which is largely about Carter’s rise as a warlord and his attempts to protect Thoris and win her heart.

The entire fun read is full of swashbuckling antics where duels are settled with “long-swords” rather than ray guns, and dangerous encounter with giant monsters like the great white apes. There are elements of space fantasy and political intrigue. Despite the outdated notions about the Martian ecosystem the fantastic landscape is lovingly detailed and makes one sad knowing that such a world doesn’t exist.

Any astute sci-fi fan will spot the inspirations for the imaginations of literary and celluloid greats like Robert Heinlein, Ray Bradbury, George Lucas and James Cameron. So for those that may wonder who is John Carter (before seeing the film John Carter or afterwards) then A Princess Of Mars is an excellent introduction.