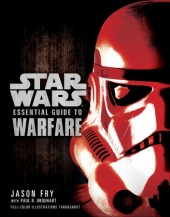 After some delay Del Rey finally released Star Wars: The Essential Guide To Warfare by Jason Fry this April. I went by my local book store today and saw the book. Browsing through it, I’ll have to say it was definitely worth the wait, IOW it looks good. As the title suggests, the book covers the conflicts in the Star Wars universe in chronological order starting with before the time of the Galactic Republic. The first conflict covered is with the Hutts fighting on a planet. For each conflict there are a few beautifully detailed drawings, along with a map of the galaxy showing where the conflict took place.

It also has profiles on the major characters that fought in the wars and details on the weapons used (i.e. blasters and lightsabers) and the ships used as well. Afterwards, the book goes on to describe a particular conflict and it seems to be told from the perspective of a historian or researcher living in the Star Wars universe. 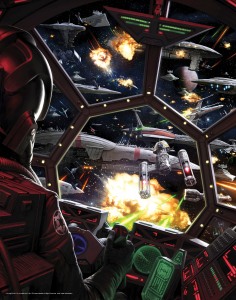 A lot of space is devoted to the Clone Wars and the famous Galactic Civil War covered in the films. These parts of the book are in the middle while the first third covers the early years of the pre-Republic and the last third goes into the post-Return Of The Jedi period in other words the expanded universe. Characters and races seen in these sections include Admiral Thrawn and the Yuzhan Vong.

Star Wars: The Essential Guide To Warfare reminded me of the book The Illustrated Star Wars Universe that covers the different planets in the galaxy which is also from the viewpoint of someone living in that universe. 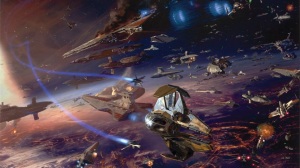 Overall, it seems like a good history of the Star Wars universe with a good timeline and provides good reference material as well. My favorite topics were, of course, from the movies like the Battle of Endor or the Battle of Coruscant because I finally got to see the battle from the POV of a cockpit fighter. The art by several artists are well done and bring the storylines to life. One thing that was amusing was the depiction of the Ewoks, they look more like savages instead of teddy bears. Too bad George Lucas didn’t go with this idea when they were depicted on screen.

My only complaint about the book is that there aren’t as many drawings as I expected. There was a lot of text, which is fine, but I wish more space was devoted to big splashy artwork. But Jason Fry does a good job with the book and it would make a solid addition to the library of any true Star Wars fan.