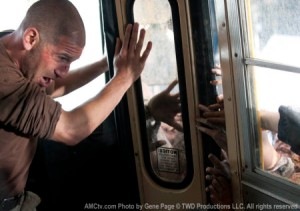 Episode Ten: Episode ten of The Walking Dead’s second season, “18 Miles Out”, opens with a smash – literally. In an exciting pre-credits scene, walkers crash through the windows of an abandoned factory and chase Rick Grimes (Andrew Lincoln), Shane Walsh (Jon Bernthal) and last episode’s hostage, Randall (Michael Zegen) – his hands tied by rope – through the factory’s lot. As the trio attempt to escape it’s every man for himself: Shane holes up in a school bus, straining to keep the doors closed to prevent the walkers from swarming in; Rick runs from a walker, barely escaping; and Randall, abandoned by the other two, crawls to reach a knife a few yards away….

Post-credits, the events unfold via flashback. Deciding not to kill Randall, Rick and Shane agree to abandon him several miles away from the farm where he has a chance of survival. On the way, Rick – looking haggard and sounding hoarse and exhausted – stops the car at a quiet junction to have a much-needed and long overdue man-to-man with Shane. Laying it out calmly and carefully, but with a firm edge, Rick tells him that he knows the truth about Otis’ mysterious death and about Lori’s pregnancy. Shane questions Rick’s survival instincts, but Rick stresses that he is a fighter who will do what he needs to do to protect his family.

Continuing their drive, Rick thinks ahead, making survival suggestions for the group’s upcoming long, cold winter on the ranch. Shane is passive and pre-occupied with his thoughts. They pass a walker plodding through a nearby field; Shane sees it but says nothing.

Reaching a creepy, abandoned industrial plant, they kill a couple of walkers and break in. As they explore the silent premises, they are shaken up by charred bodies lying in a gruesome outdoor pyre. Further in, they see two dead security guards lying side-by-side, methodically placed, but with no bites. Rick, staring at the bodies, 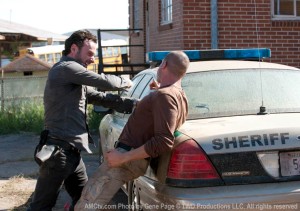 surmises that it was scratches. They drag Randall to the perimeter, rip the duct tape of his mouth but leave his hands and feet tied, and then abandon him. As the two walk away, Randall desperately tries appealing to their sense of good will and reason, to no avail. Only after shouting that he went to school with Maggie do Rick and Shane stop – both know that this knowledge is dangerous. Thinking that he might find his way back to the farm, Shane prepares to shoot the boy. Rick kicks Shane’s pistol away, igniting a brutal fistfight. Bloody and bruised, the two ex-deputy sheriffs each take a beating, with Rick coming out slightly on top. Shane throws a huge wrench at Rick, who ducks but it smashes through the building window…and walkers alerted to the commotion start pouring out (hence the show’s opening)… 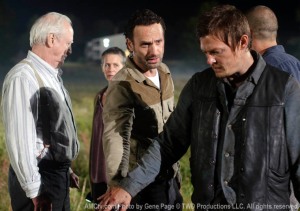 A Bunch Of Angry Men & Women

Episode Eleven: As the second season of The Walking Dead finishes up, the pre-credits scene of episode eleven, “Judge, Jury, Executioner” opens in the barn as Daryl Dixon (Norman Reedus) brutally interrogates Randall (Michael Zegen). The young hostage initially yields little info, but after Daryl’s beatings and not-so-subtle threats, he reveals that his renegade friends numbers thirty men, armed with semi-automatic rifles. He reveals to Daryl that they once kidnapped and gang-raped two farmer’s daughters and forced the farmer to watch. Daryl reacts furiously…

Post-credits, Daryl passes the grisly findings to Rick Grimes (Andrew Lincoln) and the others: if Randall’s friends pass through, the survivors are dead meat. Rick decides that the execution continues as planned; all agree except Dale (Jeffrey DeMunn), who argues that they have no right to take a life. Additionally, he puts forth that Randall is “just a kid”, he needs due process, etc. This leaves Rick unmoved. Dale next tries Andrea (Laurie Holden) and plays on her past as a civil rights lawyer, together with a call to maintain their humanity in the face of a changing world. This yields similar results, although Andrea agrees to guard Randall from the others.

Later, while Andrea is outside the barn guarding the young hostage as promised, Shane Walsh (Jon Bernthal) reveals to her his disgruntled suspicions that Rick will spare Randall at the last minute. Shane further reveals his thoughts about Rick’s incompetence and bad decisions as leader, coldly hinting about the need for “change”… Randall hears all this through a crack in the barn wall, but spots young Carl (Chandler Riggs) sitting on a loft in the barn watching him out of boredom. Using a slick buddy-buddy tone, he tries to persuade Carl to release him. Shane barges in and shoves a pistol to Randall’s face, but is stopped by Andrea. Shane warns Carl and promises not to tell his parents Rick and Lori (Sarah Wayne Callies).

While preparing for the hanging, Rick announces to Lori his intentions of clearing out the barn for the survivors’ new lodging, and strategically placing lookouts in the loft in preparation of the upcoming bleak, cold, and of course, walker-saturated winter. Even better, he suggests that they ask Hershel if they can stay in the house, to which Lori agrees. 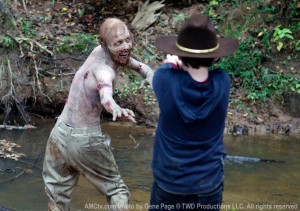 After an incident in which Carl is rude to Carol (Melissa McBride) – calling her an “idiot” for believing in heaven – the young boy nicks a gun from Daryl and leaves camp, unsupervised. Ambling around the outside, he finds a walker stuck in the mud near a riverbed. He throws rocks at it, but gets too close: the walker frees one leg trying to get the young boy…