Twenty-five years ago, Star Trek: Deep Space Nine (DS9) premiered on syndicated TV and right from the start this Star Trek spinoff charted its own unique direction. Unlike other Star Trek TV shows, Star Trek: Deep Space Nine stood out beginning with its premise and later by taking advantage of it. The show did not take place onboard a starship that traveled to different planets each week. The main character was not even a captain and was deeply troubled. More than any other Star Trek show, this one truly focused on its ensemble cast to create a rich tapestry of characters who actually grew throughout the run of the series.

When executive producer Rick Berman and writer/producer Michael Piller set out to create a new spinoff after the success of Star Trek: The Next Generation they did not take the easy route. Instead of just recycling the elements of Star Trek that made it so phenomenal they tried something different. The result was a show based on a space station with fallible characters that did not always get along with each other. Instead of having the cast explore other planets, other races came to the station, some coming from a nearby wormhole, and often the consequences of meeting the aliens were explored.  Showrunners like Ira Steven Behr took over and ran with the premise. Simmering political, social and religious situations were explored. Tensions boiled over into a long-running arc where the Federation went to war with the formidable Dominion and the impact of the war was fully examined in the program. For the first time, Star Trek became more serialized as season-long arcs were introduced, a rarity in ’90s television.

Unlike the more safe Star Trek shows running at that time, DS9 was edgier, took more risks, and went where no Trek had gone before by exploring volatile issues like social injustice, ethnic and racial tensions, taboo relationships and more. In fact, for all the noise made about Star Trek: Discovery with its non-white lead, homosexual relationships and hot-button issues, it has to be mentioned that Star Trek: Deep Space Nine covered all of this twenty five years ago.

To say that DS9 was ahead of its time is an understatement, but it can help explain why it was not a huge hit back in its day. More attention was paid to Star Trek: The Next Generation and later to Star Trek: Voyager since the latter show featured Trek’s first female lead. Yet both shows played it safe with its storylines and characters. After a while fans noticed that their familiar premise of spaceships exploring the unknown was becoming too pedestrian and predictable. DS9 on the other hand, took chances and the result was some of the richest and most memorable Star Trek stories. 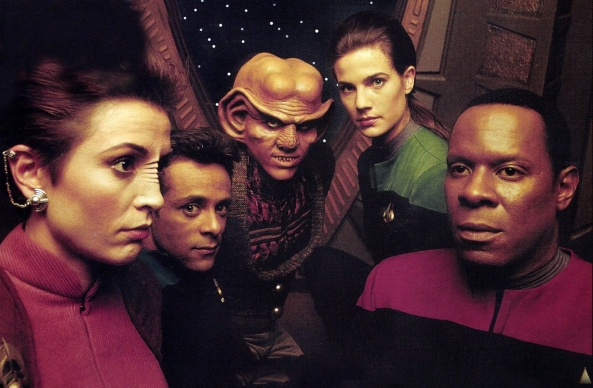 Unlike many programs, Star Trek: Deep Space Nine has aged well and is as relevant today as ever. Many are discovering the show and appreciate what it set out to do, which is why its reputation has grown over the years. While most will claim that the original Star Trek is still the best, a valid argument can be made that DS9 is actually the best Star Trek ever. If you haven’t seen the show, I highly recommend you sample it, even though the earlier episodes are the show’s weakest. However, DS9 comes into its own and before long, you will be binge watching it.

Star Trek: Deep Space Nine is the most groundbreaking Star Trek show ever made because it boldly went where no Trek had gone before with its unique premise and rich characters and stories.

8 comments on “Star Trek: Deep Space Nine Boldly Went Where No Trek Had Gone Before”