Some early critics of the show complained that the stories were rather dark, bleak and depressing. This was because the show’s first two seasons dealt with rebuilding a shattered civilization. DS9 orbited an ancient world called Bajor and it had been occupied by the enemy Cardassians (who built the station using Bajoran slave labor), who were like the Nazis. The Bajorans were a rough analogy to the Jews after World War II and Israel at its beginning. The Bajorans were on the verge of a civil war and desperate. While their plight made for some terrific episodes (“In The Hands Of The Prophets” and The Circle trilogy), it probably turned off casual viewers who wanted to see the standard starship zipping around the galaxy and having the crew solving some kind of tech-based problem.

Being that the deeply religious Bajorans were a focal point in the early episodes, the show touched on religious matters. In fact, it was one of its core concepts. In the pilot episode “Emissary” the show’s main character, Commander Benjamin Sisko (Avery Brooks) was assigned to the station and later discovered a nearby stable wormhole that was created by enigmatic non-corporeal aliens. While this was a major scientific and socio-political game changer for the Federation and helped put Bajor on the map, this event had religious ramifications. It turned out there was a prophecy in Bajoran religion that a non-Bajoran savior called the Emissary would discover the wormhole and the “Prophets” that the Bajorans worship. Therefore, Sisko became a major religious figure among Bajorans who they believed would eventually bring them salvation. This was a role that Sisko and Starfleet was very uneasy with chiefly because of their secular nature and the whole Prime Directive thing of non-interference.

A reason for why the show wasn’t a runaway hit may have to do with the timing of when it premiered. During that time, Star Trek: The Next Generation was at its peak in popularity and some fans probably wanted DS9 to be more of the same.  Sure it didn’t make sense to go to the trouble of creating a new show just to regurgitate the same ship traveling premise but some just want the same formula repeated over and over. So DS9 in trying to be distinctive was probably too different, which is what Star Trek needed and still does. The show was murky in its morality, the main heroes often committed actions that were questionable. At the time, it was believed by the suits in Paramount Studios that people didn’t want Star Trek to be dark and ambivalent, which is one of the so-called reasons behind the creation of the next spinoff Star Trek: Voyager.

Now with all the publicity Star Trek: Voyager was receiving along with the continued popularity and coverage of Star Trek: The Next Generation, it was difficult for DS9 to get any attention. It became the redheaded stepchild of the franchise. While that was unfortunate, one good thing to come out of that was that it was largely left alone. As executive producer Rick Berman concentrated on Star Trek: Voyager and Star Trek: The Next Generation’s spinoff films, exemplary writers and producers like Ron Moore, Ira Steven Behr, Robert Hewitt Wolfe and René Echevarria were put in charge of Star Trek: Deep Space Nine and made the show its own. They took risks with the characters and situations and it paid off creatively.

For instance, in the episode “Things Past” it was 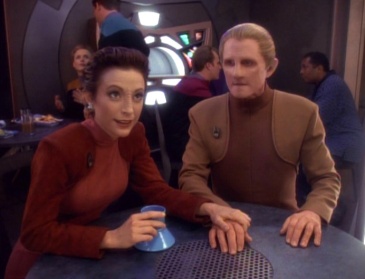 revealed that the station’s security chief Odo (Rene Auberjonois) collaborated with the Cardassians during the occupation and allowed an innocent Bajoran to be executed. The bat-eared Ferengi barkeeper Quark (Armin Shimmerman) often ran unscrupulous get-rich schemes and tried to do them without Sisko’s knowledge. As for Sisko, well in the sixth season episode “In The Pale Moonlight” he committed a treasonous act. He forged evidence to convince the neutral Romulan Empire to join the Federation’s war against the Dominion. Dubya and Dick Cheney would’ve been proud of him but most likely Sisko would’ve been court martialled if he was caught. Being that this was DS9, things weren’t so clear cut. In Sisko’s case, the Federation was badly losing the war and the captain (having being promoted in the third season) was grasping at straws. There was the show’s other main character Bajoran liaison officer Major Kira Nerys (Nana Visitor), a former terrorist and now Sisko’s first officer. She goes through several substantial character developments, most significantly with her feelings towards the Cardassians. At the show’s start, Kira harbors understandably harsh opinions towards the Cardassians. But as the first season progressed (notably in the episode “Duet” where she meets a self-hating Cardassian), she begins to question her feelings and realizes that she needs to leave her past behind and grow. By the end of the series she learned that her mother was a collaborator and sexual servant to her sworn enemy Gul Dukat (Marc Alaimo) and later Kira wound up helping the Cardassian people to overthrow the oppressive Dominion.

Star Trek: Deep Space Nine boasted a rather strong roster of well developed characters. In addition to the ones just mentioned, others included Dr. Julian Bashir (Alexander Siddig) a genius doctor who turned out to have been an illegally genetically altered superman in the same vein as the infamous Khan; his best friend was Miles O’Brien (Colm Meaney), the station’s chief engineer, who appeared on Star Trek: The Next Generation as the Enterprise’s transporter chief. While O’Brien represented the everyman on the show, he harbored a deep prejudice against Cardassians because of his past but his family helped keep him grounded. Jadzia (later Ezri) Dax (Terry Farrell then Nicole de Boer) was the station’s science officer and Sisko’s best friend. She was actually two characters; her race, the Trill, consisted of a humanoid host who harbored a giant slug-like creature within them that formed a symbiotic pair. Jake Sisko (Cirroc Lofton) was the most underutilized main character but was nonetheless interesting. He was one of the very few human civilian characters in Star Trek and played the role of the army brat who traveled wherever his parents were posted. Jake lost his mother at an early age and struggled to find his way in the station.

Eventually he took an interest in writing and journalism and was the center of one of the show’s greatest episodes “The Visitor” where after Sisko is trapped in a timeless limbo, Jake sacrifices his career, marriage and eventually his life to rescue his father. Another Next Generation character who took up residence on DS9 was Lt. Commander Worf (Michael Dorn), his character joined the show during the fourth season in an attempt to boost ratings. But honestly the show didn’t need him and in fact, the drawback to his addition is that the character roster became a bit crowded. Besides, Worf didn’t stand out as much as he did in the old show because the DS9 roster was much more diverse and eclectic.

One comment on “A Look Back At Star Trek: Deep Space Nine, Part One”