AMC’s The Walking Dead, now in its third season, centers on Rick Grimes (Andrew Lincoln), a former deputy sheriff from Georgia leading a small band of survivors to safety in the aftermath of devastating zombie apocalypse. Called walkers (they roam endlessly and never tire), the moaning, decaying, zombies are a deadly lot, as they shuffle in wandering herds, seeking live flesh. The first two seasons, a ratings and critical smash, showed Rick and a diverse band of survivors seeking safe refuge while fighting walkers, other survivors, and each other. The Walking Dead is loosely based on the comics of the same name, and uses it as a springboard rather than adhere to it faithfully; this approach enables plenty of twists, surprises, new characters, and red herrings.

Law-and-order man Rick Grimes has the heart of a lion, a classic good guy so pure in his outlook and valiant in his mission he’s more like a knight from a medieval tale or a hero from a Greek myth. Joining Rick are his pretty wife Lori (Sarah Wayne Callies), his pre-teen son Carl (Chandler Riggs); Daryl (Norman Reedus), a redneck archer/tracker/outdoorsman and Rick’s wingman; Glenn (Steven Yeun), a Korean delivery boy turned resourceful street rat; T-Dog (Irone Singleton), a tough, stocky black guy; Carol (Melissa McBride), a gentle widow, having lost her husband and daughter in seasons one and two; elderly Hershel (Scott Wilson), an upright, religious country vet in whose farm the survivors sought refuge; Hershel’s two daughters Maggie (Lauren Cohan), romantically linked with Glenn, and the emotionally-troubled Beth (Emily Kinney); Andrea (Laurie Holden), a former lawyer, whose character developed over the first two seasons from a jangled bundle of nerves to a straight shooter; and the newest addition, the mysterious katana-wielding Michonne (Danai Gurira).

In last season’s exciting finale, “Beside The Dying Fire”, the walkers overran Hershel’s farm, killing his daughter and son-in law, and exiling the hapless survivors. Separated from the group, Andrea is saved by the laconic Michonne, while Rick asserted his indisputable leadership (or “Rick-tatorship”, as fans are calling it).

In season three’s premiere, “Seed”, the slam-bang pre-credits sequence opens with a twisted mockup of Lost, where the camera spirals away from a walker’s eye – cold, reptilian, lifeless. Seeking refuge, Rick and the survivors burst into a simple country house. Fanning out like a well-oiled SWAT unit (including Carl), they secure the house by killing that walker and other undead inhabitants. Just as they settle in, T-Dog spots a herd of walkers converging on the house. The survivors grab their gear and flee… 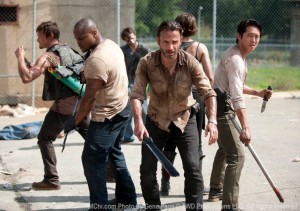 Later on, while hunting food, Rick and Daryl spy the prison shown in last season’s “Besides The Dying Fire”. Realizing its potential for refuge, Rick devises a plan with the group to clear the yard of walkers and break into the prison (the second time this episode where we see the survivors work brilliantly as a team). Reveling in the safety of the prison yard, they whoop and holler with joy at the open space. In the morning, they clear out a ravaged, overturned cell block and settle in. 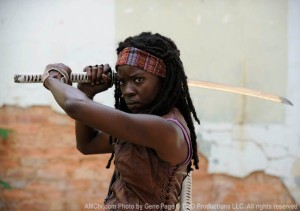 Meanwhile, we get our first glimpse of Michonne since her brief introduction last season. Entering a dilapidated pharmacy in a small town, she coolly beheads walkers while finding aspirin for Andrea, who is sick and resting safely in a nearby meat locker. Andrea urges Michonne to abandon her, but Michonne refuses. Then the two women along with Michonne’s two chained, pet-like, armless and jawless walkers set out.

Back in the prison, the survivors find an ammunition stash and prepare to clear out the rest of the prison, in hopes of finding the cafeteria and infirmary. Armed and ready, they light the way through the unlit, ghoulish cell block by flashlight, stepping over bloody and decaying corpses while Glenn marks their trail with spray paint. At the far end of the block, they stumble into walkers; in the ensuing chaos, Glenn and Maggie separate from the others; Hershel backs up to locate them and is bitten in the leg by a walker. Reuniting, the group quickly finds safety, where Rick, in an attempt to halt the spreading infection, unsheathes a hatchet and amputates Hershel’s leg below the knee. Hearing noises, they look up, and realize they are not alone; they are being watched by live prisoners… END_OF_DOCUMENT_TOKEN_TO_BE_REPLACED