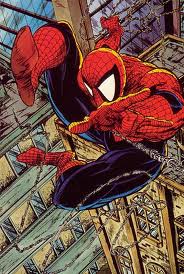 Continuing a look at Spider-Man’s highlight in the past 50 years, there are more aspects of Spider-Man that has made him one of the most endearing and popular superheroes ever created.

Though Spider-Man isn’t the most powerful superhero, his pluck and penchant for being in the wrong place at the right time make for captivating stories. Many times these out-of-his-element tales often took place in the pages of Marvel Team-Up. Other times he was a critical element in some wide-reaching storylines and comic books. For instance, it can be said that he was the heart of the Civil War mini-series. While that story dealt with Captain America and his forces squaring off against Iron Man and his side, Spider-Man was trapped in the middle of the war and both sides. At first, he supported Iron Man’s side about registering superhumans and revealed his secret identity to the world (Civil War # 2). But by the time the mini-series ended, Spidey switched sides and paid a terrible price as he was ostracized and his aunt nearly lost her life.

In other storylines, Spider-Man turned out to be instrumental in taking out an overly powerful enemy. Marvel Two-In-One Annual # 2 had him and the Thing taking on Thanos, who wanted to destroy our sun, and was holding the Avengers prisoner. After the Thing was defeated by Thanos, Spider-Man, as usual, was plagued with self doubt that he was out of his league. However, he overcame his inhibitiosn and freed the Avengers to fight Thanos. That wasn’t all, he alone freed the spirit of Adam Warlock to defeat Thanos, which turned the tide of the battle. Throughout this story, the metaphysical entities Master Order and Lord Chaos claimed that Spider-Man was chosen by them to fulfill his destiny by doing these actions.

Recent stories have shown Spider-Man taking on a larger role in saving the entire world and more. Who can forget the time that he was endowed with the cosmic powers of Captain Universe? Possessing

One of the most remarkable qualities about Spider-Man is his large and colorful rogues gallery. Many villains have been introduced over the years and most of them are quite memorable. They include the Lizard, Mysterio, the Sandman, Electro, the Chameleon, the Shocker and the Kingpin. But two villains vying for

the dubious honor as his deadliest foe are Doctor Octopus and the Green Goblin. Introduced waaay back in the early issues of The Amazing Spider-Man (issues # 3 and 14 respectively), these characters were instantly popular. While Doctor Octopus continuously plagues the Wall-Crawler (and has a major role in the upcoming 700th issue of The Amazing Spider-Man) the Green Goblin took the mantle fairly early as his greatest enemy. That was because he discovered Spider-Man’s secret identity (The Amazing Spider-Man # 39, 40). Those two issues revealed that he was Norman Osborn, the wealthy father of Peter’s best friend Harry. Afterwards, Osborn would use that knowledge of Peter’s secret identity to deadly affect over the years. This culminated in his killing Peter’s girlfriend Gwen Stacy in The Amazing Spider-Man # 121. END_OF_DOCUMENT_TOKEN_TO_BE_REPLACED