“The measure of a man is what he does with power.” Plato

“Compromise our safety, destroy our community – I’ll die before I let that happen” the Governor

The pre-credits scene of episode three of The Walking Dead, “Walk With Me”, shows an army helicopter flying over rural countryside. Suddenly beset by technical problems, it crashes into the forest below. Watching from afar are Andrea (Laurie Holden) and Michonne (Danai Gurira).

Post-credits, the blanketed Andrea, still recovering from her fever, and the grim Michonne, pulling her armless and jawless pet walkers like a grotesque version of pack mules, slowly hike in to investigate. Viewing the horrific crash site, Michonne chains the walkers to a tree, unsheathes her katana and moves in for a closer look just as a couple of vehicles speed in. A group of tough-looking, armed men emerge; they fan out and carefully survey the site. Their leader, the Governor (David Morrissey), orders the men to conserve their ammo where possible (instead using baseball bats and bows and arrows), as they kill all approaching walkers. The pilot (Julio Cedillo) is found barely alive, and taken for medical care. As Michonne’s gurgling pet walkers reveal their presence, she’s forced to decapitate them. However, it’s too late; they are found moments later by none other than Merle Dixon (Michael Rooker), the seedy redneck racist not seen since the first season of The Walking Dead when he was handcuffed to a roof by the survivors and cut off his own hand to escape. As he recognizes Andrea, we see that in place of his hand is a bizarre prosthetic contraption. Andrea faints.

Blindfolded, Andrea and Michonne are stripped of their weapons and taken to the group’s compound, the town of Woodbury. Although given medical care, their requests to leave are denied on grounds that it’s dark and they aren’t well enough. Their questions receive vague answers, and they are heavily guarded. They are later interrogated by Merle, evidently now a high-ranking assistant to the Governor. Merle is initially cordial and asks about the survivors, including his brother Daryl (Norman Reedus), but is bitter about being left for the dead. When Merle leaves, the women are briefly introduced to the Governor, who listens to their request. Explaining that they can leave the following morning, he first shows them Woodbury’s tightly-guarded perimeter (his men quickly and efficiently pick off some approaching walkers, which they call “creepers”).  Additionally, the Governor enforces a strict curfew where no one is allowed out after dark. Although Michonne is suspicious, the Governor convinces them to stay awhile.  He shows them to their lodgings, a pleasant, spacious room with spare clothes, hot showers, and food.

In the morning, Andrea and Michonne stroll around Woodbury with an official escort, and for the first time, see the town. They gape at the trim lawns and men, women, and children walking casually though the neat streets and lounging on park benches.

Meanwhile, the surviving helicopter pilot recounts the final events before the fatal flight. As National Guardsmen, they were fleeing a refugee camp overrun with walkers; the Governor asks for the location so he can rescue the survivors. Later visiting a laboratory, we learn that his scientist/partner, Milton (Dallas Roberts) was commissioned by the Governor to experiment on walkers. In a gruesome display, we see Michonne’s beheaded walkers with their eyes rolling, still showing animation. The scientist explains that walkers act as repellant to other walkers (hence why Michonne kept them), or as the Governor puts it, as camouflage.

The next morning, the Governor and Milton join Andrea and Michonne for breakfast. Making charming conversation, the Governor extols the virtues of Woodbury and its people. Although Andrea chats away freely, Michonne remains mostly silent. In a post-breakfast stroll, the two women lay it on the line; Andrea wants to stay another “day or two” while Michonne wants out.

In a trip out of Woodbury, the Governor tracks down the surviving soldiers; although looking a bit shabby, the Guardsmen are suspicious, armed, and alert. Waving the white flag of truce, the Governor offers to help but instead ambushes them, and together with his hidden crew kill all the Guardsmen, and plunder their supplies.

Returning from the ambush, the Governor immediately gathers the townspeople in the town square. Lying to them, he gives a heroic speech about how they arrived too late to save the soldiers, and that the people of Woodbury should honor their sacrifice and give thanks for what they have. Michonne cynically listens nearby.

Later, the Governor enjoys a relaxing, late-evening drink in his mansion. Passing by his sleeping concubine, he retires to his den, where we glimpse a pre-apocalypse family portrait. Removing a key from around his neck, he enters a locked room off to the side. Then

relaxing on a comfortable chair with his drink, he stares at the wall opposite him, covered wall-to-wall by a grisly aquarium full of decapitated walkers’ heads, including that of the pilot.

“Walk with Me”is an odd duck of an episode for The Walking Dead; however, coming from a series where freakish and nightmarish scenarios pop up like mushrooms after the rain, that’s not bad at all. Eschewing the slam-bang action of the season’s first two episodes, “Walk With Me” alternates between surprises and character development, mainly the slow and methodical introduction of the crafty, sadistic Governor and his fiefdom, the town of Woodbury. Ultimately, it waves the true flag of serial TV by leaving more questions than it answers. Who is the Governor? What did Merle do to acquire such a high and trusted position with him? Will Andrea and Michonne stay? What will they discover? Why is Milton so fascinated with walkers’ possible memories? What is the true nature of Woodbury? Is it a ruse to lull newcomers (notice no one entered any of the “stores”), or a Prisoner-style village where everyone is treated well but forbidden to leave?

In any case, due to the Governor’s increasingly pointed interest in the survivors, we can expect an eventual showdown with Rick Grimes; as with other movies or comics where two badasses lock horns, it will be a true “clash of the titans”. One thing is for sure, I wouldn’t want to be there when it happens.
PART II:

“Can’t we just have one good day? Glenn

The pre-credits scene of episode four of The Walking Dead, “Killer Within”, shows an unseen figure placing a slaughtered deer near the prison gate, then busting open the gate’s lock.  Alerting the walkers, he places the deer’s heart in full view by the prison entrance.

Post-credits, Rick Grimes (Andrew Lincoln) and the survivors are doing the usual grungy yard maintenance when prisoners Axel (Lew Temple) and Oscar (Vincent Ward) approach, asking to be let out of their spooky and dirty cell block and join the survivors’ group. Although T-Dog (IronE Singleton) is in favor, Rick and the rest remain suspicious. Rick cuts a deal whereby the prisoners leave the prison rather than remain in the cell block; he loads a car with a week’s provisions.

In Woodbury, Michonne examines the armed trucks guarding the town perimeter and notices the trucks’ suspicious bullet holes and blood smears. Joined suddenly by the Governor, she questions him about the National Guardsmen’s deaths. The Governor sidesteps the questions and proclaims the men as heroes. Later, Andrea and Michonne pore over maps as they plan to leave Woodbury. 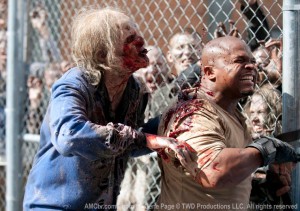 In the prison, Rick’s wife Lori (Sarah Wayne Callies), his son Carl (Chandler Riggs) and Beth (Emily Kinney), assist a recovering Hershel (Scott Wilson) – who had his lower leg amputated – in finally arising from his bed. Using crutches, he is unsteady at first, but stubbornly decides to take a stroll outside in the yard. As he walks around in the sunlight (to everyone’s delight), walkers inexplicably start streaming into the prison yard. Carol, Maggie (Lauren Cohan), T-Dog, and Carl – all armed – fight the walkers while weaponless Hershel and Beth (Emily Kinney) reach a safe, fenced alcove. Rick, Glenn (Steven Yeun), and Daryl (Norman Reedus) – all outside the prison gates looking for firewood – are forced to run the gates’ perimeter in order to enter. Although they successfully fight off the horde, it is too late; T-Dog gets bitten in the shoulder while Carl, Maggie, and Lori seek shelter in the cell block and disappear.

Back in Woodbury, Andrea (looking aglow after days of rest, food, and shampoo) shows Merle the location of Hershel’s farm on a map. While the Governor plays golf (shades of Will Smith in I am Legend), Merle requests permission to find his brother Daryl. The Governor refuses, but emphasizes that if Merle can bring him more precise information, he’ll allow Merle to go and even join him. Later Andrea enjoys a goodbye drink with the Governor, who reveals personal information, including his name –Philip. The Governor evidently a manipulative and convincing talker – insists that Andrea can return to Woodbury anytime. Andrea later decides to stay longer in Woodbury, angering Michonne.

Deep in the prison, T-Dog refuses Carol’s (Melissa McBride) help with his bitten shoulder and insists on getting Carol back safely to the cell block. At the laundry door, in a final sacrificial act, T-Dog throws himself at some walkers, creating a diversion that enables Carol to run to safety. T-Dog screams as the walkers rip him to pieces.

At the same time, Carl, Maggie, and Lori

evade walkers while Lori suddenly feels contractions. Carl leads them to a boiler room where Lori goes into labor.  Unfortunately, she begins hemorrhaging; aware that she will die, she shares a brief but touching moment with Carl, who cuts the baby out with an improvised c-section as Lori screams. While Maggie holds the newborn, offscreen Carl shoots Lori’s dead body in the head to prevent her from reanimating as a walker.

Outside during Lori’s ordeal, after determining that the gate was cut open, Rick blames Lew and Oscar, who declare their innocence. At the same time, the prison alarm is sounded, drawing more outside walkers to the open prison. Oscar claims some familiarity with the infrastructure and leads them to the generator room where Andrew, exiled by Rick (in The Walking Dead episode, “Sick”) to a closed-off, walker-infested courtyard, jumps out and attacks Rick with an axe. Rick is saved at the last minute by Oscar, who uses Rick’s gun to kill Andrew, then returns his gun to him. Turning off the power, they run outside and reunite with the rest. Rick begins looking for Lori, but Carl and a crying Maggie – holding the bloody but living newborn – slowly approach them. Rick realizes Lori is dead, and begins wailing with grief. 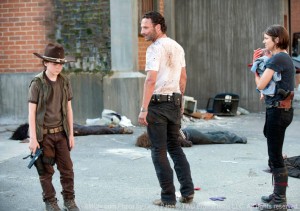 Brutal, shocking, and depressing, “Killer Within” changes the rules of the game. By killing off two major characters in one episode, and by re-introducing the prisoner Andrew to enact his bloody and ill-fated revenge scheme, The Walking Dead is telling its viewers to expect anything, anywhere, anytime. From now on, we as the viewers cannot rest. No plot twist is too extreme, no act is too bloody, no character is safe from death, and any living character (and dead, too, for that matter) can return at any time. One final word: Both characters died as heroes. Lori’s nobly insisted – and shockingly painful – c-section enabled her baby to live, but T-Dog’s selfless acts – leading Carol through the prison to safety and then flinging himself at the walkers – was pure gallantry. He will be missed. Two dead survivors from a small group is way too much; the question is, who’s next?

One comment on “Deadly Turning Points On The Walking Dead, Parts I & II”