It’s hard to believe that fifteen years have already passed since Farscape, one of the best sci-fi TV shows, made its debut. It chronicled the saga of John Crichton (Ben Browder), an astronaut stranded on the other side of the universe. Joining him was a genuine motley crew of alien fugitives such as his eventual lover Aeryn Sun (Claudia Black), fierce warrior D’Argo (Anthony Simcoe), the pacifistic Zhaan (Virginia Hey), insane Stark (Paul Goddard), Chiana (Gigi Edgley), an exotically beautiful con artist, non-humans Rygel and Pilot, and more. Farscape was captivating, exciting and usually off the wall. These are fifteen of its best episodes.

14. TIE: “Rhapsody In Blue”/”Scratch ‘n’ Sniff” Farscape ran the gamut with both thought-provoking and hilarious episodes and it wasn’t afraid to explore many avenues. “Rhapsody In Blue” is one of the show’s most spiritual episodes as Crichton psychically

bonds with the priestess Zhaan to calm her troubled soul. “Scratch ‘n’ Sniff” is one of those love-it-or-hate-it episodes. Moya’s crew take shore leave on a pleasure planet. Hilarity and downright outrageous hijinks commences after the crew are drugged by nefarious types. For a show that prides itself on the bizarre this episode set new levels with its strange imagery and camera work.

13. “Infinite Possibilities (Part 2): Icarus Abides” A running plot line in the show’s third season had John Crichton being duplicated. Soon after, both Crichtons (and other characters) went their separate ways as the ships Moya and Talyn traveled on different courses. In this episode, one of the Crichtons makes the ultimate sacrifice to keep wormhole technology from falling into the wrong hands. The final moments with him and his lover Aeryn Sun were very touching and memorable.

12. “Out Of Their Minds” This episode takes one of the most tired sci-fi clichés, characters switched into different bodies, and makes it fresh and above all hysterical. Credit for this has to go to the actors who perfectly captured the personalities of other characters. An audacious example includes the moment when D’Argo with Chiana’s mind tries to seduce the toad-like Rygel, who is in Crichton’s body.

11. “A Constellation Of Doubt” Depressed after Aeryn is captured by the evil reptilian Scarrans, Crichton 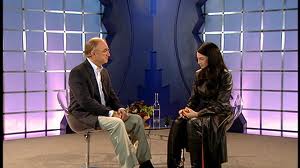 retreats to his quarters and watches a video transmission from Earth. It’s a sensationalistic documentary about his and the Moya’s crew recent visit to Earth. Sadly, while humanity’s paranoid and bigoted reactions to the aliens are disheartening, the video provides intriguing insights into the show’s characters with their alien views of life.

10. “Bad Timing” As the final episode of the series, “Bad Timing” couldn’t be more aptly named. It ends in a big cliffhanger where John Crichton and Aeryn Sun are killed off after he proposes marriage to her! Fans were on pins and needles until the mini-series Farscape: The Peacekeeper Wars resolved that problem. That aside, the episode was a fitting epitaph for this grand space opera.

9. “The Way We Weren’t” Moya’s records reveal that before Farscape began, Aeryn, when she was still a militaristic Peacekeeper, helped kill Moya’s previous pilot. At first enraged, the current Pilot reveals his own dark past regarding Moya. This disturbing trip down memory lane was a thought-provoking look at forgiveness and letting go of the past. It best illustrated how Aeryn had grown so much since the show’s beginnings when she was antagonistic.

8. “Incubator” The episode focuses on the villainous Scorpius as he reveals his back story. We learn that the half Sebacean, half Scarran was conceived when a Sebacean prisoner was raped by a brutish Scarran. As young Scorpius grows, he is tormented and looked down upon by other Scarrans who think he is inferior. Not only do we learn why he hates Scarrans, but astonishingly, Scorpius becomes someone to be pitied because he is a victim of his tortured upbringing.

7. “Nerve”/”The Hidden Memory” Farscape’s first two-part episode introduces viewers to the lecherous Scorpius, who would become the main villain of the show. Posing as a Peacekeeper to obtain medicine for Aeryn, Crichton’s cover is blown and is later tortured by Scorpius before he can be rescued. The information he unknowingly has about creating wormholes will change the nature of Farscape irrevocably as Scorpius becomes obsessed with gaining that knowledge.

6. “A Human Reaction” Crichton finds a way back to Earth. But John begins realizing that things aren’t exactly right at home. Meanwhile, he is distraught by the increasing hostile reception D’Argo, Rygel and Aeryn get from human authorities. What make this episode stand out more is that the genesis of Farscape’s most important plot thread begins: Crichton meets advanced aliens who can create wormholes and impart this knowledge unknowingly to him. Later on, this information makes him the target of Scorpius and other villains.

5. “The Choice” After the death of a loved one, a grief-stricken Aeryn Sun travels to a planet where the dead can communicate with the living. As she encounters friends and foes from her past, Aeryn must decide where to go with her life. “The Choice” was one of the bleakest and most haunting episodes of Farscape and Claudia Black perfectly emoted the dark and worn mood of her character, who is emotionally raw.

4. “Terra Firma” John Crichton unexpectedly returns to Earth along with the rest of the Moya crew. This time it’s for real. What is supposed to be a joyous occasion turns out to be a mixed blessing for Crichton based on how humanity reacts to his alien friends. Although not as hostile as he feared, humans are derisive enough to make his friends uncomfortable. At the same time, he realizes the old adage about not being able to go home again as he admits to himself that he has changed since leaving Earth.

3. “The Locket” After Moya is stuck in a mysterious cloud, Aeryn goes on a brief scouting mission and returns having

aged several decades. She then leaves for a planet that she has called home for years, so Crichton follows her and he winds up marooned there with her and grows old as well. In all that time, they grow closer to each other as they age gracefully with tenderly rendered scenes. This charming character drama was well embellished with the puzzling mystery of their aging, which is tied to Moya’s predicament. However, the heart of the episode is justifiably John and Aeryn’s relationship.

2. “Liars, Guns And Money” trilogy (“A Not So Simple Plan”; “With Friends Like These”; “Plan B”) Farscape excelled with epic three-part sagas. This one was its best. At times humorous, other times exciting, this nail-biting, explosive yarn had it all:

compelling drama, sacrifices, dark humor, explosive battle scenes and high adventure. All the components needed for a true space opera. The crew of Moya hatch an overly complicated scheme to rob a highly guarded criminal bank to obtain funds to free D’Argo’s enslaved son, Jothee (Matthew Newton). Their plan includes hiring savage thugs and mercenaries they’ve encountered in past episodes. What complicates matters is that Scorpius arrives at the bank and schemes to capture Crichton. Their final showdown was just spectacular.

1. “Die Me Dichotomy” This second-season closer focuses on John Crichton’s mental trauma. After the end of the “Liars, Guns And Money”

trilogy, Crichton is clearly insane with an implanted neural clone of Scorpius in his mind. As his friends try getting him medical help, the clone takes over Crichton’s mind and causes the death of someone close to Crichton and the others. Things get more desperate when Scorpius shows up to retrieve the wormhole knowledge from Crichton who is at the moment in a crippled, near-vegetative state. This pivotal episode exemplifies the animosity between Crichton and Scorpius and the love shared by Crichton and Aeryn. The personal stakes have never been so high or desperate for these characters, who are put through emotional wringers in “Die Me Dichotomy”. With this episode’s emphasis on character in spite of all its many story developments, it was Farscape at its very best.