I’m not exaggerating when I say that Captain America: The Winter Soldier is one of the greatest superhero films ever made. It ranks right up there with Iron Man, The Dark Knight and The Avengers. It’s that great! It’s exciting, intriguing, full of action and, most importantly, character defining moments that elevates this film above your standard superhero flick.

While the first Captain America film was a pleasant salute to World War II Americana, this sequel just elevates the character and the Marvel Cinematic Universe to a whole new level. In fact, Captain America: The Winter Soldier completely upends the carefully crafted world created with

these Marvel movies and it does so in a logical way that actually reflects on the impact of the events from The Avengers. As much as 9/11 radically changed our world, the alien attack on New York City in The Avengers has had far reaching ramifications. Iron Man 3 explored the personal impact as seen with Iron Man’s post traumatic stress disorder. This Captain America film examines the impact on the world stage and how it has made the spy agency S.H.I.E.L.D. just a tad bit too omnipresent. That was something that was underlying in past Marvel films, the spies were everywhere, seemed too powerful, had too much carte blanche. This film shows how the agency overreached with a diabolical plot hatched by traitors from within.

The film begins with Steve Rogers a.k.a Captain America (Chris Evans) leading a strike force that includes fellow Avenger Natasha Romanoff a.k.a Black Widow (Scarlett Johannson) to rescue hostages onboard a hijacked freighter ship. It turns out that the hostages are actually S.H.I.E.L.D. agents and Black Widow has a separate agenda to download encrypted files from the ship’s computer. Captain America then learns that S.H.I.E.L.D. is about to launch Project: Insight, which will use a trio of new generation helicarriers to preemptively take out potential threats worldwide. 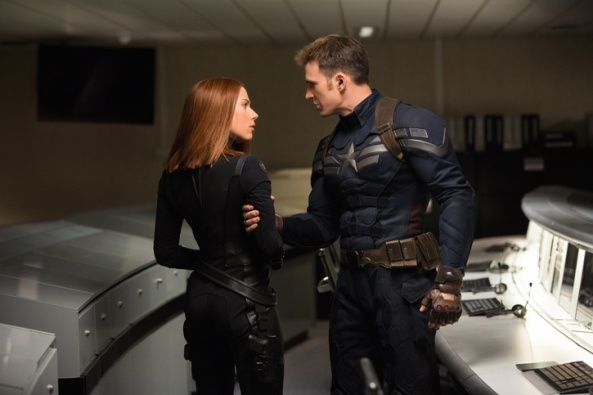 All this causes Rogers to question his allegiance to S.H.I.E.L.D. and magnificently echoes the unease he’s having with adapting to this new world. Despite its fast-moving plot, time is taken to feature quiet, reflective moments where he sees how much the world and his country has changed. They are the emotional highlights of the film and allow Evans to prove his acting chops. He undeniably owns this role and it’s now difficult to picture another actor playing this character.

Anyway, it turns out that he is not the only one wondering about the spy agency’s ambiguous nature. Nick Fury (Samuel L. Jackson), S.H.I.E.L.D.’s director also has his doubts and his inquiries launch a devastating chain of events that includes having Rogers and Romanoff hunted by S.H.I.E.L.D. and ultimately leaves the agency and the world changed forever. The stakes are that high.

As he eludes S.H.I.E.L.D., Captain America has to face a specter from his past. This being the lethal Winter Soldier (Sebastian Stan), a super assassin with a bionic arm. I won’t give away who the Winter Soldier is in case anyone reading this doesn’t know but his storyline is very tragic considering his relationship to Rogers. Putting that aside the directors Anthony and Joe Russo make him one of the most formidable super villains seen on film and while the Red Skull was Captain America’s chief nemesis, the Winter Soldier is both a physical match to Rogers and a genuine threat. At times I actually wondered if the good Captain would prevail in their fights.

Speaking of action, this film has lots of it. It does have that annoying shaky cam for some scenes, but the directors knew enough to control it and let the spectacular stunts speak for themselves. It’s incredible how Marvel Studios were able to make a perfect, unorthodox directing choice. This duo was known for directing comedies,

who would’ve known they could pull this off? But what underlines all the action sequences are the characters, they’re so well written and acted and the actors have their moments, even the newcomers. Take Anthony Mackie as Sam Wilson a.k.a. the Falcon. This version of the Falcon was so cool and likable, it’s easy to see why Rogers gravitated to this guy when he needed help. The Falcon definitely has his moments with his flight outfit that seems so formidable and believable.

Captain America: The Winter Soldier works in so many ways because writers Christopher Markus and Stephen McFeely took the best elements from the Captain America comic books and fused them to make this unforgettable cinematic wonder. The movie left me wanting to see more and it set up enough questions and material to carry over to another sequel. Honestly, since Marvel Studios has signed on these directors for the next film, I cannot wait to see it.