The 1976 movie Logan’s Run is based on a book by William F. Nolan and George Clayton Johnson. The film follows the journey of Logan 5 (Michael York), a “sandman” who is an enforcer in a futuristic, dystopian society that is obsessed with youth. It’s so obsessed that when a citizen turns thirty years old he or she undergo “renewal” but are actually euthanized. While many in this domed, underground society (actually a stand-in for a mall in Texas) accept their fate, some called runners choose to flee and keep living. Logan and other sandmen are tasked to track down these runners and killing them.

During an investigation, Logan learns of a place called Sanctuary, which offers a haven for runners. The computers who rule his society give Logan a mission to find Sanctuary. In order to infiltrate the runners, Logan’s life schedule is advanced to the age of thirty, subjecting him for renewal.

During his cover as a runner Logan falls in love with a dissident, Jessica 6 (Jenny Agutter) and learns the truth about Sanctuary and his way of life. In a typical story fashion, Logan genuinely questions his belief system and of course, turns against his society.

I’ll be the first to admit that Logan’s Run is kind of kitschy and dated. Those scenes in the mall um… future city have that funky ’70s feel but I loved the message which resonates with our society. I mean look around, see how we’re obsessed with looking young and beautiful. Facelifts, tummy tucks, nose jobs. There was even a scene in the movie where Logan visited a high tech plastic surgeon located in a mall who used lasers to rejuvenate customers.

Another theme is how society devalues old people. One of the best moments in Logan’s Run is when Logan and Jessica meet an old man (Peter Ustinov) in the ruins of Washington, D.C.. They are shocked to see someone so old, they actually wonder why his face is “cracked”! Yet the old man shows them that life goes on beyond thirty.

That is why Logan’s Run should be remade. Its subject matter is still relevant to our times and may teach some viewers a lesson or two. I haven’t read the book, but it’s supposed to be different than the movie. For instance, Logan is much younger in the book since the day of renewal is when one turns twenty one. But the basis of the story is solid. There is little that needs to be done with the story, just update the effects and film it anywhere except a mall! 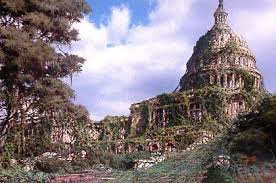 It would be a fun idea to cast Michael York as the old man living in the ruins of D.C.–the production design showing the wrecked buildings and overgrown vegetation was excellent btw. There have been many attempts to remake the movie and they all failed. Bryan Singer,

Tron: Legacy director John Kosinski and Drive director Nicolas Winding Refn were going to direct a remake at one time or another. With the latter director, Ryan Gosling was to star in the remake. Well all those plans fell apart, but it’s encouraging that quality filmmakers have shown interest in remaking Logan’s Run.  It seems to be a matter of timing. So hopefully it will be remade someday.