After sampling the first few episodes of the CBS summer series Under The Dome, it’s very clear that the series strayed detrimentally from its source book. Based on the mammoth novel by Stephen King, Under The Dome tells the story about a small town, Chester’s Mill, that is suddenly and inexplicably sealed off from the outside world by a huge, transparent dome. The novel focused on the townspeople trapped in the Dome and was about how they coped with this bizarre situation. Under The Dome raised obvious issues like what would be the environmental impact? How will people behave when the food supply dwindles? How long before chaos and anarchy take hold of normal law-biding citizens? The strange circumstance brought out the best and worst in the book’s characters.

While the book was captivating and really explored the ramifications of the event, this TV adaptation feels formulaic. It does have some nice visuals, explicitly the shots of the Dome cutting off Chester’s Mill from the outside world. In a recent episode, the U.S. military launched a missile at the Dome to destroy it and it looked great, as was the aftermath outside the Dome.

Yet, the TV show is a bit bland and bogged down with melodramatic developments. Some of those were covered in the book and were written expertly, but in TV feel mediocre. There is this storyline about a sociopathic creep called “Junior” Rennie (Alexander Koch), who is obviously insane and has a dangerous obsession over this waitress Angie McAlister (Britt Anderson). In the book, this obsession turned truly macabre, but in the show, it’s toned down and the subplot is now a tedious cat-and-mouse game. Junior catches her and imprisons her in a bomb shelter. Angie tries to escape and is eventually freed. Junior chases her and so on. Then there is the matter of character judgment. In the book, Junior was made a special deputy and started a reign of terror with his gang. It was believable because his father, “Big Jim” Rennie, a local politician, pulls strings for his son to be made a special deputy. This doesn’t happen in the show. Instead, the sheriff’s deputy, Linda Esquivel (Natalie Martinez), who is in charge after the sheriff dies early on, makes Junior a special deputy. Esquivel can’t see what a slimeball his Junior is and deputizes him with little thought. Talk about lack of judgment! Then he is hardly ever shown performing his duties, he’s too busy chasing Angie. Meanwhile, Esquivel complains every now and then about how he’s missing when he’s needed.

In the novel, there was a subplot about illegal crystal meth production run by several characters. It wasn’t the most

interesting part in the book and instead of dropping it, the show’s producers decided to run with it. In a bit of ironic casting, Dean Norris, famous for his role in Breaking Bad, plays Big Jim Rennie, one of the chiefs running the operation. Norris is a good actor so this isn’t anything against him, but his character has been watered down from the venomous despot presented in King’s book. In the show, his villainy is more ambiguous and, as a result, he isn’t as menacing or charismatic as in the book. But he may get there.

Every time the show attempts to embellish the characters and events, the efforts fall flat. Like Rennie, the main characters in the book bear moderate to slim resemblances to their TV counterparts. Take the other main character in Under The Dome, Dale “Barbie” Barbara (Mike Vogel). 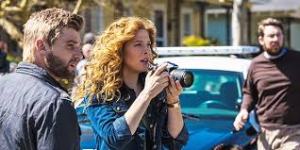 In Stephen King’s book, the guy was relatable to readers. Barbie was a former Iraq War vet turned drifter/short order cook, who was leaving town after a run-in with Junior and his gang. Now in the show, the character is a bookie’s collector who’s in town to collect on a debt. The person he was trying to collect money from is accidently murdered by him, and this person just happens to be the husband of Julia Schumway (Rachelle Lefevre), the town journalist. The show tries to keep this tepid angle running by having him playing coy with her and it’s just ludicrous. On top of that, there are even clumsy attempts to show some kind of attraction between the two, but it feels forced. By trying to nuance both characters, the show just made their situation seem contrived.

Let’s not forget the coincidental notion of an interracial lesbian couple from L.A., Alice Cavert (Samantha Mathis) and Carolyn Hill ( Aisha Hinds), with their moody daughter Norrie (Mackenzie Lintz), who were passing through town when the Dome came down. Plus, there’s the inconvenient fact that one of the moms happens to be diabetic and Chester’s Mill has a short supply of insulin.

Adding to these contrivances is the way the people under the Dome behave. Sometimes, they act like they couldn’t care less. Take Rennie’s obsession with covering up his part in the crystal meth production rather than trying to figure out how to deal with this crisis. Then there is Angie’s brother, Joe (Colin Ford). His sister is missing for days and only by the fourth episode did he notice that she was gone. In all that time, he was too busy trying to impress the Norrie. You would think that more people would be freaking out over having this invisible force field entrapping you. That’s a big WTF moment. However, there is little speculation going on over what created the Dome or thinking about basic emergency steps like conserving food and water. These kinds of logical lapses are reminiscent of that CBS show Jericho where characters threw parties in the wake of a nuclear attack and danced in the rain.

Under The Dome seems like it’s trying to be the next Lost but can’t pull that off. What’s worse is that, like Lost, there is a sense that things are going to drag out. This means more melodrama, less resolution and answers. CBS already renewed Under The Dome for another season, so that guarantees that we won’t be getting any concrete answers. At best, we’ll be given some tidbits and more questions. But the bigger question is will people care enough about the show next summer to bother tuning back in?