Director Neill Blomkamp has returned after his triumphant debut film District 9 with his sophomore effort Elysium.

The film takes place in the year 2154 in Los Angeles and a giant orbital space habitat called Elysium. Earth is overpopulated and overpolluted, it’s a literal hellhole. Think of Brazilian favelos, mixed with dusty shantytowns and that is life on the planet. There’s little vegetation, rubble is everywhere and the landscape is overrun with desperate people. Meanwhile, life is idyllic up in Elysium. The habitat is a luxurious refuge for Earth’s richest elite with beautiful mansions, perfectly tended yards and gardens, and the best that money can buy. Including the best health systems that can rebuild damaged bodies and cure cancer. As expected, not everyone can afford to live in Elysium, even though everyone on the ruined Earth want nothing more than to go to the habitat.

Elysium stars Matt Damon as Max Da Costa, a former criminal who wants to eke out an honest living as a laborer at a robotics factory. His ultimate dream is to be able to afford a ticket to Elysium. It takes an industrial accident to accelerate that ambition. Max is dying of radiation poisoning and like everyone  living on Earth, there is little that can be done to help him. Max’s only hope is to somehow make it to Elysium and its miraculous medical services.

In a desperate move, he offers his services to a local crime boss that he once worked for named Spider (Wagner Moura). One of Spider’s illegal activities is to try to ferry Earth citizens onto Elysium.  Usually, these efforts fail, thanks to the diligence of Elysium’s defense secretary Delacourt (Jodie Foster). 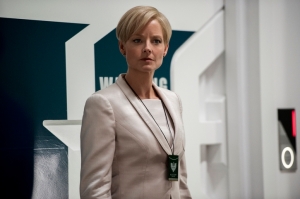 She is willing to go to extremes to keep out riff raff from Earth, which includes having illegal shuttles shot out of Elysium’s skies. After the latest round of shuttles are destroyed, killing dozens of people, the president of Elysium (Faran Tahir) warns her that her job is in danger. Angered by the politician, Delacourt arranges for a coup to replace him by having the habitat’s computer system rebooted. She enlists the services of John Carlyle (Willaim Fichtner), the CEO of Max’s company, to develop a software program to carry out her coup. This program, along with other valuable data like bank codes, are stored in Carlyle’s brain.

Enter Max. Spider wants him to steal software information from any high-level executive’s brain to get rich. He has an exoskeleton and cybernetic implants surgically attached to Max, who targets Carlyle because he blames him for his dire situation. After shooting down Carlyle’s shuttle, Max is able to download Carlyle’s data, but winds up being targeted by Delacourt’s favored mercenary, a nutjob called Kruger (Sharlto Copley). This merc is a true sociopath, who reeks of barbaric lunacy. There hasn’t been a villain this insane or vicious on film since the Joker in The Dark Knight. 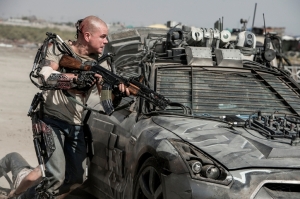 Max is able to flee from Kruger but not before the madman wounds him. Needing immediate medical attention, Max seeks the help of an old friend Frey (Alice Braga), who is a nurse and has a child (Emma Tremblay) that is dying of leukemia. This, of course, complicates his plans to avoid Kruger and get to the habitat. But Max realizes the value of the information he has stored in his brain, and is now even more motivated to reach his goal.

Elysium is an exciting and thought provoking film to watch. Blomkamp reinforces the notion that he is a gifted sci-fi director who can blend action, tension and social commentary. Admittedly, this isn’t as good as District 9, but by no means is this an inferior film. It just has some flaws in its execution and plot.

One nagging point has to do with Elysium’s security. It seems too easy to send unauthorized shuttles to the habitat. Security is very shoddy being that later in the film, armed thugs are able to run around the place and seemingly wipe out Elysium’s adminstrators without any resistance. On a related matter, there are circumstances involving the illegal shuttles shot down at the film’s beginning. Delacourt contacts Kruger, who is on Earth, to shoot them down from the planet. Why doesn’t the habitat have its own defenses to shoot at the shuttles, which were closer to Elysium at that point? Then how will the disheveled illegals blend into Elysium’s upper-crust citizenry? Did they risk their lives just to get access to the health systems? That would make more sense, but it isn’t clear. 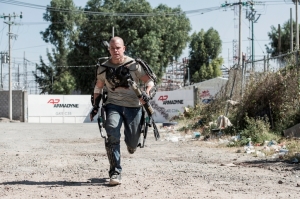 Another problem has to do with the social commentary, which is heavy handed at times. Occupy Wall Street types will love this rich-people-are-evil mantra but it may roll eyes from other viewers. Elysium has even more over-the-head views on the current healthcare and immigration issues. It may turn off some with opposing opinions about these matters, especially with the way Elysium ends. Without going into spoilers, the conclusion doesn’t really examine the consequences of what happens and comes off as naive and wishful thinking on the director’s part (he wrote the script).

Then there are the motivation of many characters. Sometimes it’s so clumsily and broadly spelled out that some subtlety would’ve helped. Other times, they behave very irrationally and have these unexpected about-faces that only serve to move the plot along. One perfect example is with Kruger. One moment is an amoral, socially dense barbarian who gets off on killing people. Then pines over someone then wants that person killed later on. Much of it didn’t make a lot of sense.

Putting aside those negatives, Elysium has so much to recommend. It’s very visually arresting, particularly with all the squalor that has befallen Earth. It was shocking to find out that this decrepit landscape that looks like a third-world  nation is actually a future Los Angeles. In some ways, it makes the dystopian view of LA seen in Blade Runner seem downright more appealing. In Elysium, everything is falling apart and lacks the visual poetry seen in Blade Runner.

The special effects are just terrific and look realistic, especially with the graphics and robotic guards seen throughout the film. Blomkamp has a firm command of the camera and presents a realistically rendered and grimy future.  Also, the performances are fine from everyone, though Copley sometimes chews the scenes a bit too much.

Elysium is worthy followup to District 9 for Neill Blomkamp that like good sci-fi offers something to think about while it entertains viewers.

One comment on “Elysium Is Neill Blomkamp’s Uneven Second Effort”