Looking through the first issue in this mini-series it becomes very clear that the first version of the monumental epic bears little resemblance to what wound up on screen three years later. Superficially, it’s the same basic premise: out in a distant galaxy a young Jedi fights for freedom against an evil empire. Only this young Jedi (or Jedi-Bendu as is the order’s rightful name) is called Annikin Starkiller. By the end of the first issue he comes under the tutelage of General Luke Skywalker, who in this version is more akin to the older Obi-Wan Kenobi seen in Episode IV, except he’s a revered military leader and not an old hermit.

The other important Star Wars character, Darth Vader, while dressed in black, doesn’t wear a helmet, though he still looks malicious. Thanks for that goes to the mini-series’ artist Mike Mayhew. Actually, Mayhew and writer J. W. Rinzler should be credited for presenting this intriguing alternate take on the famous Star Wars franchise. The Star Wars seems more like an updated version of the pulpy Flash Gordon or Buck Rogers newspaper strips. It really isn’t surprising considering that Lucas was inspired by those strips and, in fact, originally intended to direct a Flash Gordon movie.

The story is about an evil Empire, whose 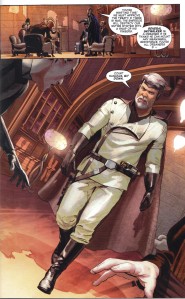 capitol is in Alderaan, that wants to conquer the last remaining free world Aquilae, which is where the nearly extinct Jedi are located. General Skywalker has to convince the ruling king in Aquilae to marshal forces to fight the Empire. Along the way, readers are introduced to a portly Bail Antilles, a teenage Princess Leia, and Skywalker’s old friend, Kane Starkiller, who is Annikin’s father.

The Star Wars can be daunting even for someone familiar with the Star Wars lore because it’s very complex. Actually, the comic does the same thing that the original Star Wars did for audiences back in 1977, which is to throw readers into the middle of a story taking place in unfamiliar territory and we have to learn about that universe along the way.

It can be offsetting for fans because it can be the blueprint for a reboot somewhere down the line that would be more controversial than the recent Star Trek reboot. This version of Star Wars could set fandom on fire just for its different take on the universe and characters.

But for now, fans can enjoy this new, radical take of Star Wars and ponder what might’ve been.