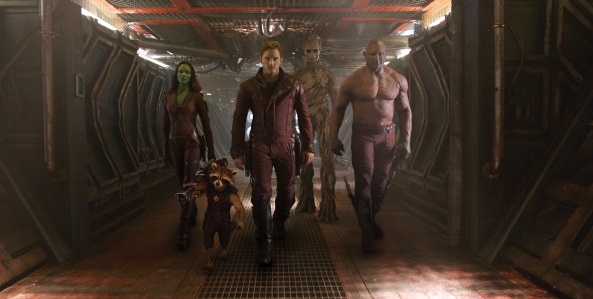 After what seemed like forever, Marvel Studios finally unveiled the first official trailer for the upcoming film Guardians Of The Galaxy. Based on the comic book of the same name it’s about Peter Quill a.k.a. Star-Lord (Chris Pratt) and a band of alien misfits and outlaws who get into a grand outer space misadventure.  Guardians Of The Galaxy is one of the most anticipated films for this summer and for non-fans, this excitement is surprising given that the film is based on one of the lesser known properties of Marvel Comics. Some may even claim that this thing is a gamble for a Marvel movie because unlike other properties that weren’t well known like Elektra and Ghost Rider, this film looks like a lavish big budget affair with a big name cast (Zoe Saldana, John C. Reilly, Benecio Del Toro, etc.).

It’s not really surprising when you think about it. The premise is waaay out there and it doesn’t fall into the formula for a Marvel film. One look at the trailer shows that it seems more like Farscape or Star Wars than the latest Iron Man film. We see lots of weird aliens, dazzling special effects, big fight scenes and the center of it all is the self-important and goofy Peter Quill. Pratt’s introductory scenes in the trailer suggest that his character will be cut from the same cloth as his other loony character, Andy Dwyer from Parks & Recreation, only more serious and with a touch of John Crichton thrown in. 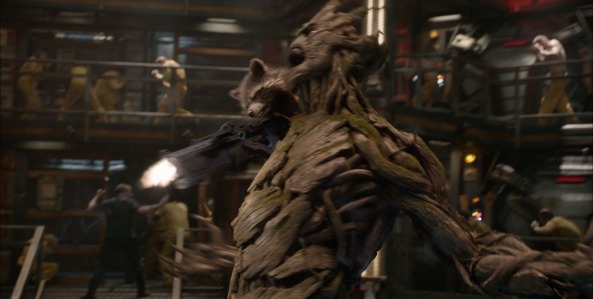 But hands down, the big highlights were Rocket Raccoon and Groot. They look outlandish and you have to give Marvel and director James Gunn credit for not holding back on these two aliens. Rocket Raccoon and Groot look like they just stepped out of the comic books and they could be the breakout characters. Just imagine the toy shelves this summer cluttered with plush Rocket Raccoons! It’s a no brainer.

Many of the fast paced shots were identical to those seen in that brief, grainy bootleg trailer that has been on the Internet since last summer, complete with Blue Swede’s “Hooked On A Feeling” playing in the soundtrack. Seeing it in high-definition was just gravy.

All this hoopla over a trailer in the end won’t matter much if the film fails to deliver. But Guardians Of The Galaxy looks like another sure-fire winner for Marvel.