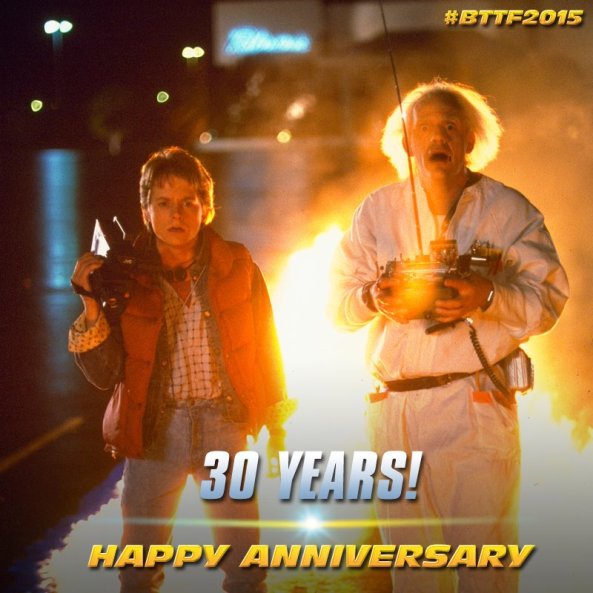 “Doc, I’m from the future. I came here in a time machine that you invented. Now I need your help to get back to the year 1985.” – Marty McFly

It’s been thirty years since the world was introduced to Back to the Future, the greatest time travel film ever made. For anyone who hasn’t seen it yet, the film is about Marty McFly, your typical modern teenager who accidently time travels to 1955 and meets his then-teenage parents. This created a temporal paradox where Marty was threatened with non-existence so not only must Marty find a way back to his time period, but has to correct his parents’ timeline to ensure he’s eventually born. The instant classic wowed many audiences when it was released and was the biggest box office hit of 1985. Through the years since its initial release Back to the Future has generated many fans who look fondly at the film and for good reason.

Back to the Future, the brainchild of director Robert Zemeckis and writer/producer Bob Gale, is a humorous, smart take on time travel that starred Michael J. Fox as Marty McFly and Christopher Lloyd as his best friend Dr. Emmett “Doc” Brown. Both actors made tremendous contributions to the film’s success thanks to their comedic performances and a genuine chemistry between them. Both actors were so well suited for their roles, which made them so endearing to audiences.

cast as Marty. It was Eric Stoltz, but as filming commenced Zemeckis realized that Stoltz wasn’t right for the role. To his credit, the director made the right decision to replace him with Fox, who was actually the first choice for the role but was initially unavailable. It all worked out in the end, Fox turned out to be perfect as the distressed but likeable teenagerwho finds himself in an extraordinary situation.

Thanks to his popularity at the time (his sitcom Family Ties was a hit TV show in 1985), Fox helped draw in ticket buyers who normally couldn’t be bothered with a sci-fi comedy about time travel. But Fox had a certain charm that made Marty so appealing to audiences. Through Marty’s eyes, we saw the trepidations of being a teenager and later in the film Marty was able to see that his teenage parents had similar gripes and issues. He witnessed teenagers in the 1950s with timeless problems such as peer pressure, bullying, social awkwardness and self doubt. Marty learned some profound lessons about his parents and himself. Underlying that are simple, yet poignant messages about self confidence and accomplishments. “If you put your mind to it, you can accomplish anything.”

Fox isn’t the only reason that Back to the Future is so memorable. A large measure of that has to do with the supporting cast as well. Aside from Lloyd (who perfected the daffy, wild-eyed scientist), Lea Thompson as Lorraine Baines, and Thomas F. Wilson as the comical bully Biff Tannen, Crispin Glover nearly steals the film as George McFly, Marty’s nerdy father. While Glover has funny playing the goofy, out-of-touch older father in the 1980s scenes, he really shines in the 1950s scenes where he exemplifies the shy and nervous sci-fi geek.

What sci-fi fan can’t identify with his dilemma where he has to choose between going out to a dance or staying home to watch Science Fiction Theater? It’s just unfortunate that Glover didn’t return for the sequels, thus diminishing his character in those films. But we did get to see more of Biff and his relatives later on, who were perfect villains throughout the three Back to the Future films.

Underlining the film’s appeal is the accurate representation of the 1950s and the culture shock that followed when Marty first experiences the time period. The film is littered funny and amusing nods to the past and present like Marty ordering a Pepsi Free at a diner and being told he has to pay for it, or Marty being mistaken for an alien creature by farm folks, and Marty disguising himself as Darth Vader. Other nifty touches sprinkled throughout the film include the well-groomed nature of that time period, the archaic but catchy music and how undeveloped but pristine Marty’s hometown of Hill Valley appeared.

Overall, Marty’s experiences and culture clash were some of the best and funniest fish-out-of-water scenarios done on film. Looking at the film now, a modern-day viewer can also experience a measure of culture shock at the then-contemporary 1980s scenes. The contrast between the clean, bright middle-class lifestyle of the 1950s and the rundown, but modern vista of the 1980s is startling. Instead of making the film dated, the fact that Back to the Future is bookended with the 1980s adds to the rewatchability factor.

Time Travel Mechanics and Other Headaches

What made the film so interesting weren’t just the pop culture trappings. Back to the Future cleverly explored the

intricate problems related to time travel. A perfect example is a major conflict in the film that exemplifies the Grandfather Paradox. Marty met his parents and in doing so disrupted the timeline where his mother wound up infatuated with Marty instead of his father. This created a Butterfly Effect that threatened Marty’s existence, which is evident in the film’s climax as he slowly begins to fade away. Certainly there are flaws in the logic of this development, but it’s a good illustration of the Grandfather Paradox. A nitpicker could argue that Marty was never truly in danger because of the paradox, but it was still fun to see him wrangle with his situation and keep his mother’s amorous hands off him.

As flawed as some of the temporal logic is in Back to the Future it was refreshing to see temporal mechanics explained in an easy-to-follow manner that never talks down to the viewer. Zemeckis and Gale are rightfully credited for this as well as Christopher Lloyd with his rapid-fire and comical delivery as Doc Brown explained time travel to Marty and audiences.

Another ingenious idea that similar stories don’t have is that time travel itself is instantaneous. Usually in a time travel scene in a film or TV show, the director is allowed to go wild and present quasi-existential, high art sequences like in Time After Time or Star Trek IV: The Voyage Home. Or audiences witness sped-up sequences like in The Time Machine. With Back to the Future, the excitement instead lies with the time-traveling DeLorean building up enough speed to break the time barrier. It goes without saying that the electrifying fx, Alan Silvestri’s bombastic score, and quick editing add to the thrill of watching Marty accelerating the car to 88 mph. 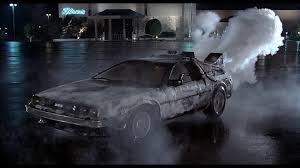 Speaking of the car, the time-traveling DeLorean has become one of the most identifiable and iconic vehicles in cinema history. The long-discontinued car, the DeLorean DMC-12, with its unique stainless steel exterior and gull-wing doors has become synonymous with Back to the Future.

In reality, the car didn’t handle well and had low hp, but it looked so damn cool as it revved up to 88 mph thanks to Doc Brown’s modifications. On a personal note, while many genre fans are enamored with famous cars and vehicles like the Batmobile or the James Bond cars, my preference is the DeLorean.

Here’s some trivia; during the film’s pre-production the method of time traveling contemplated was a refrigerator. The filmmakers wisely decided to go in another direction, partly out of fears that youngsters would try to emulate time traveling by enclosing themselves in actual refrigerators! Not only did this save some young lives but it kept the film’s time machine from being compared to the TARDIS used in Doctor Who. Using a car was an innovative time travel method being that on screen we’ve being shown static machines like the TARDIS that stay in one place. It makes perfect sense to have a mobile time machine. Plus, the car still elicits elated gasps at the end of the film when it starts flying after Doc Brown mutters the film’s final unforgettable line “Where we’re going we don’t need roads.”.

Back To Back To The Future?

The original film and its sequels are so beloved that people are torn about the prospect of more Back to the Future films. The last film in the series came out in 1990 and effectively concluded the saga, although there were spinoff video games, an animated series and a Universal Studios theme ride. Fervent fans hope against hope that we haven’t seen the last of Marty McFly and Doc Brown and their time traveling DeLorean. 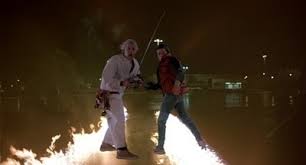 Unfortunately, real-life circumstances make a sequel all but impossible given that Michael J. Fox is obviously too old to play a youthful Marty and is battling Parkinson’s disease. Additionally, Robert Zemeckis and Bob Gale have reiterated that the Back to the Future story is complete. To emphasize this, in a recent interview, Zemeckis stated that since he and Gale own the rights to the series a remake would never be approved.

However, if a remake were to be done it would interesting to see one done where a teenager from 2015 goes back thirty years into the past, but it would be difficult to find someone comparable to Fox. The best option would be to come up with a continuation of the original series. Perhaps it could involve Marty’s children and differences between our reality and the fictional 2015 seen in the second film could be explained away as a result of temporal changes. But it just wouldn’t be the same. Frankly, trying to follow up the original films seems impossible because of the high regard Back to the Future has earned.

For now, as with other immortal film classics we’ll always have the original film and its sequels to treasure and watch over and over.

3 comments on “Back to the Future: Celebrating 30 Years Of The Timeless Classic”