Out of the four current TV shows based on a DC Comic, The Flash is the one that sticks closest to its comic book roots.

Airing on The CW network, The Flash stars Grant Gustin as the Flash or Barry Allen. He was introduced in a couple of episodes of Arrow in its second season, which set up his origin. The pilot episode of The Flash embellished the Flash’s origin and opened up Allen’s world. When he was young, his mother was killed by a mysterious figure in a vortex. Unfortunately, his father (played by the original Flash John Wesley Shipp) was sent to prison for her murder and Barry’s been looking for the killer ever since.

In the pilot (and the Arrow episode “Three Ghosts”), Barry was hit by lightning and fell onto chemicals at his lab in Central City when a nearby particle accelerator exploded.

That accelerator was part of S.T.A.R. Labs headed by Harrison Wells (Tom Cavanagh) and the accident made him a pariah and a paraplegic. What’s revealed in the pilot and several episodes is that Wells is only pretending to be a paraplegic and that he has nefarious and deceitful intentions. After the lightning bolt knocks Barry into a coma, he later awakens in Wells’ lab and soon discovers he has superhuman speed. This was caused by the accelerator, the storm it created and the chemicals that splashed over him when he was struck. The accelerator also unleashed a type of radiation that randomly gave some people in Central City superhuman powers, turning them into supervillains of the week.

Now Barry, when not doing his job as a dorky crime scene investigator, spends his spare time at S.T.A.R. Labs where Wells and his assistants run tests on Barry and help him catch the new supervillains that have sprung up from the explosion. 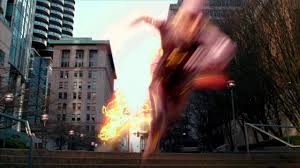 As a show, The Flash is generally entertaining. It’s not deep, and a bit too lightweight and clunky, but it captures the breezy spirit of the comic book with fast-moving stories and Barry’s superfast antics. They’re among the highlights of the show and are very inventive. In the episode “Plastique”, he used his powers to blur his face and reverberate his vocal chords to hide his identity and it was as much fun to watch as seeing him run across water.

One thing the show did right when compared to most comic-book-based shows is that it jumped right into the mythos of the superhero and showcased the Flash’s famous rogues gallery. Captain Cold (Wentworth Miller) has already made his appearance, as has nods to Gorilla Grodd and Professor Zoom. But the most interesting villain is Wells himself. The pilot revealed that he has knowledge of the future and seems to be using all means, including murder, to guide Barry into fulfilling his superhero destiny.

It would all be more palatable if the acting were better. Gustin is OK as Barry, but earlier on, he emoted

Peter Parker too much, which wasn’t in line with his character. But he’s toned down the nerdy act in recent episodes. The other actors are fine, if not exceptional, except for Carlos Valdes, who plays Cisco Ramon, an overeager and annoying lab assistant. It seems like he is trying to emulate the quirky Felicity Smoak character from Arrow but he cannot pull it off and the result is that his scenes are irritating. Then there is the situation with the love of his life Iris West (Candice Patton). In the show, they have it that the two grew up together in the same home after Barry’s father went to jail. Essentially, Barry was a foster child in Iris’ home…so that means they’re really foster siblings. If that is so, then the unrequited attraction he has for her is uncomfortable to watch.

Putting that aside, The Flash is still young and finding its legs, but it’s better done than some of the other superhero shows. To date, the show is worth watching and hopefully will become much more captivating once the kinks are worked out.