Interstellar may be director Christopher Nolan’s most ambitious work to date. Is it his best? Maybe, it truly depends on any viewer’s taste. Regardless of one’s viewpoint, Interstellar is probably Nolan’s most emotional film rivaling The Dark Knight.

One criticism of Christopher Nolan as a director is that sometimes his films feel emotionally distant even though he tries very hard to connect audiences with his characters. This time, Nolan is able to make that connection thanks in large part to Matthew McConaughy’s sincere performance. Playing Cooper, a former astronaut turned corn farmer, McConaughy’s work is gripping and deep and he is able to keep his scenes from being too kitschy. The emotions he displays strike a perfect note.

In an unspecified future, the Earth is slowly dying. Various crops like wheat and okra have gone extinct as pervasive dust strangles the world. As crops die off, humanity spirals towards extinction with dust invading everything. Dreams are long gone, replaced by a practical need to grow more food and to just survive. As a widowed farmer, Cooper longs for the days when humanity strived for the stars and a sense of adventure.

Eventually he meets an old colleague, Prof. Brand (Michael Caine) and his daughter Amelia (Anne Hathaway). They are part of the remnants of NASA and a secret mission to return

to the stars. Fifty years earlier, a wormhole appeared near Saturn and several manned missions were sent into the wormhole since the wormhole leads to other habitable worlds. Brand hopes that these worlds can be colonized in order to save humanity. Cooper is recruited to join Amelia and other astronauts to voyage through the wormhole and follow up on data provided by earlier explorers on three potential worlds for colonization.

In the run up to Cooper leaving Earth and his children, Interstellar is the typical well-plotted-though-a bit-distant Nolan film. Yes, there are the teary scenes from his daughter Murphy (Mackenzie Foy) and subtle disparaging remarks from his father-in-law (John Lithgow) about Cooper leaving his children behind without a guarantee of returning. These scenes do work but one has to wonder how Steven Spielberg (who was attached to the film originally) would’ve handled them. They probably would’ve had more emotional punch or they might’ve been overly sentimental. 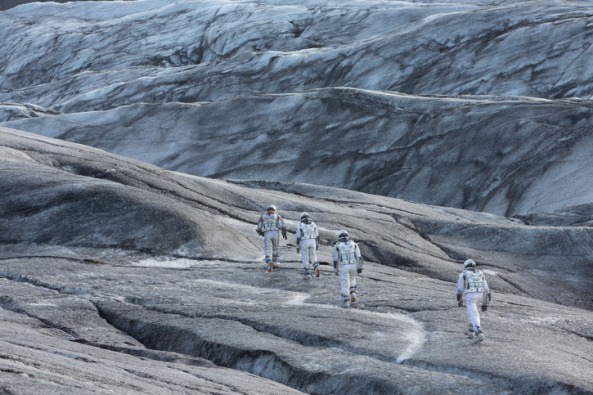 Interstellar does pick up in leaps and bounds the moment Cooper and the crew of the spaceship Endurance first plunge into the wormhole. These moments are gasp inducing and afterwards a sense of danger and wonder is felt throughout the rest of the film. Nolan is also able to inject a feeling of moroseness and loss, especially when the effects of time dilation are noticed. Even more ominous are the moments when the Endurance crew explore two worlds. They seem genuinely alien and uninviting, and add a feeling of foreboding and lost time. Meanwhile, in the short time that he’s exploring, Cooper’s children have grown into adulthood and Murphy (now played by Jessica Chastain) has joined the project by assisting Prof. Brand as the old man struggles with a gravitational equation to allow humanity to leave Earth. As this is going on, the film engages the viewers even more and more.  Moments of high tension and eye-popping wonder fill the theater screen. The only drawbacks to Interstellar at this point are some pacing and narrative issues, as well as expository dialogue that flies by quickly. It dares audiences to keep up with  verbal examinations of quantum physics and other modern scientific concepts. The payoff though is huge.

That is because final part of Interstellar is unforgettable and daringly thought-provoking with mind-twisting moments. Nolan skillfully presents some far out concepts of physics and the nature of time and other dimensions that calls to mind Kubrick’s work in 2001: A Space Odyssey. But Nolan departs from Kubrick in that while he is as analytical as Kubrick, the core of this film isn’t stark nor cold. Rather, Interstellar embraces human emotion as it rails against the cold, harsh nature of science and physics. Not only that, the film goes beyond and explores some ethical and philosophical concepts about species survival, love and the human connection. As a sci-fi epic, Interstellar is a sweeping, magnificent, though flawed, endeavor that pushes boundaries.