The Fantastic Four, Marvel Comics’ first superhero team, always had a hard time with its live-action adaptations. The new reboot isn’t an exception. Filmmakers can’t seem to be able to properly translate what worked for this team in the pages of comic books into movies. Still, putting aside what went wrong with the three previous movies, they did get many parts right. It’s just that they missed the mark, sometimes by a mile.

Bernd Eichinger and his Neue Constantin studio bought the film rights to the Fantastic Four back in the ’80s, but couldn’t raise the funds for the movie. By the next decade in order to prevent losing the rights the studio with Roger Corman’s help produced The Fantastic Four a quick, cheap adaptation.

Oh boy, this movie was a mess, it’s on the level of those Godawful monstrosities made by The Asylum. The acting was hysterically bad, particularly Joseph Culp as Doctor Doom. Talk about hamming up the scenes! Then there were the zero-grade special effects. It’s hard to believe that a million dollars was spent on this fiasco when you see that they used animatics during the one scene that the Human Torch (Jay Underwood) used his full powers. Want a guaranteed laugh? Check out the film’s final scene when Mr. Fantastic (Alex Hyde-White) waves goodbye with an obvious fake arm from the sunroof of his wedding limo!

Yet, as terrible as the film was, it had a certain charm. The production nailed down the team’s look right down to the costumes, even The Thing (Michael Bailey Smith) was impressive. This is amazing considering how far off the mark more professional productions were with their versions of The Thing and Dr. Doom. Never mind the acting, at least they looked like their comic book counterparts!

Despite their inexperience, you could tell that the actors and production team were trying their best. They honestly believed this was going to be a big deal, but tragically for them it wasn’t. The cast and crew didn’t know that the film was never intended to be released and it wasn’t. Nor did they expect the film to get its infamous reputation as bootleg copies of the film circulated. Still, while it’s a terrible movie, it warrants a viewing for either fans who want to see a more faithful adaptation or drunks needing a good laugh.

When the superhero movie boom started early last decade, it wasn’t long before the FF got their shot at the limelight. 20th Century Fox released Fantastic Four in 2005, which turned out to be a modest hit, but received mixed reactions. 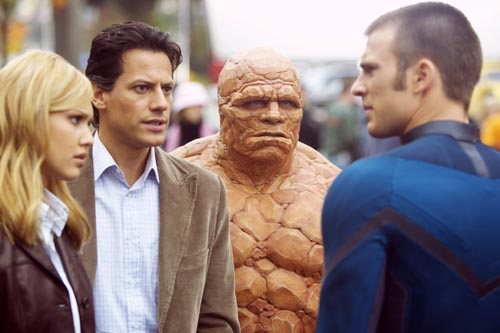 Even though Fantastic Four was a more polished and professional film with a $100 million budget (compared to the reboot’s $122 million) it seemed routine and bland at times.

What was worse was that Fantastic Four was hobbled with a poor villain, a vital component of any superhero film. Dr. Doom (Julian McMahon) was completely wrong from the casting to his backstory. In this version, he was your typical evil CEO who was part metallic and had electric-based powers. Those kind of changes wouldn’t have bothered people so much if the actor was a good fit. But, McMahon just didn’t have the gravitas that Doom requires because he’s a larger-than-life villain.

Ben Grimm/The Thing (Michael Chiklis) was also altered, but with different results. His look didn’t match the comic books’ version because he was human sized and lacked that famous protruding brow line. Also, his story was altered in that he was married, but his wife (briefly played by Laurie Holden of The Walking Dead) left him after she saw how he was disfigured by the accident that gave him his powers. But these changes weren’t too jarring and more importantly, Chiklis and the production captured Ben Grimm’s essence. Like in the comics he was downtrodden and full of self pity. He quarreled with his teammates, especially Johnny Storm (Chris Evans), who loved pulling pranks on him.

The other highlight was Johnny himself. Evans channeled the nature of this young superhero brilliantly. He reveled in his powers, he was brash, brave and loved life, which is why he was a good foil for the moody Thing. Evans was so convincing as the happy-go-lucky Human Torch that when he was announced to play Captain America, some people doubted he could portray the more mature and grounded hero. He proved them wrong.

Even the other actors who played the rest of the team weren’t bad. Ioan Gruffudd was a passable Reed Richards/Mr. Fantastic; he looked the part and seemed older, but lacked the fatherly image Mr. Fantastic had in the comics. Jessica Alba was okay as Sue Storm/Invisible Woman, though many still complain about her.

What made Fantastic Four work was that at its heart it told a good-natured story about a quartet who became a dysfunctional, but caring family unit. The effects are dated today, but that doesn’t matter, you could tell everyone was having a good time making the film. Let’s not forget that the film and its sequel had two of Stan Lee’s better cameos. In the first one, he played the mailman Willie Lumpkin, a comic book character. In the sequel Stan Lee played himself trying to crash Reed and Sue’s wedding, which was also from the comic books. 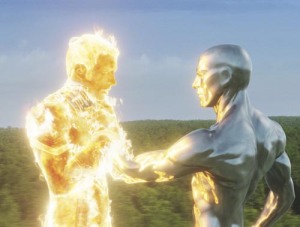 Part of the reason why Fantastic Four isn’t thought of kindly today had to do with the villain and this problem carried over to its sequel Fantastic Four: Rise of the Silver Surfer. A mistake was made to bring back Doom as the main villain instead of focusing on the coming Galactus threat. As we’re waiting for Galactus to show up, we had to put up with more flat acting by McMahon as he conspired to steal the Silver Surfer’s (Doug Jones) powers. That plot was partially inspired by a comic book story, but it took too much time.

What made things worse was that we never got to see Galactus! All they showed was just a big cosmic cloud approaching Earth. That was it! Director Tim Story said in interviews that he didn’t want to show the famous villain because at that time a Silver Surfer spinoff was planned and he wanted to give the director for that film a chance to design Galactus. That my readers is a copout. What’s more likely was that they didn’t have the budget or the imagination to do Galactus properly. Seriously, they shouldn’t have bothered with this story and done something more low-scale.

This miscalculation on the filmmakers’ part killed any enthusiasm for future sequels. It has taken Fox many years to take another crack at the team, only now the reboot wildly deviates from the source material to be nearly unrecognizable. Who knows what happens next for the Fantastic Four on the big screen, but they deserve better because they’re the superheroes that launched Marvel Comics.