The latest TV show on the Syfy channel, The Expanse, is that channel’s most ambitious and intriguing series since their re-imagining of Battlestar Galactica. Easily one of the best TV shows ever done from Syfy, The Expanse has been described as a Game of Thrones in outer space. It’s an easy hook to bring in viewers, and one that doesn’t do the TV show justice.

Based on a series of books by James S.A. Corey, The Expanse takes place in the 23rd century where humanity has colonized Mars and the asteroid belt, as well as the moons of the outer planets. A fragile state of cold war exists between Earth, Mars and the colonists living in the Belt, with Earth and Mars being the two superpowers that rely on the resources mined from the Belt. Those living on the Belt, principally on the dwarf planet Ceres, are called Belters and live a hardscrabble existence. Looked down upon by the rest of humanity, these Belters disdain non-Belters and are on the verge of open rebellion. A group called  the Outer Planets Alliance (OPA) has emerged and become a major thorn for Earth and Mars, which considers them to be a terrorist organization.

one takes place on Ceres and details the investigation by a gumshoe-like detective called Josephus Miller (Thomas Jane), who dresses the part and has a combover from hell. He gets an assignment to track this missing rich girl from Earth called Julie Mao (Florence Faivre). During his investigations which take him into the seediest corners of the station, Miller begins uncovering a huge conspiracy that threatens to upset the balance of power in the solar system.

At the same time, The Expanse chronicles the odyssey of James Holden (Steven Strait), the first officer on the Canterbury, an ice freighter on its way back to Ceres. After answering a bogus distress call from a ship that was the last known location of Julie Mao, the Canterbury is destroyed by an unknown party. Only Holden and a handful of his crew manage to escape in a shuttle. As they struggle to make it back to Ceres, they witness first hand elements of the same conspiracy that threatens to ignite a war.

Meanwhile, on Earth, United Nations diplomat Chrisjen Avasarala (Shoreh Aghdashloo), suspicious of the OPA, becomes aware of the machinations to foment a war between her world and Mars, and tries to uncover the truth before it’s too late.

The Expanse has so many nice touches in its depictions of what life in the 23rd century might be like. It’s very commendable that the showrunners often go out of their way to depict environments with low to zero gravity, people griping about paying for air, how much of a paradise Earth seems

(the future skyline of New York City was simply stunning) compared to the cramped, squalid neo ghettoes of Ceres, the strange mishmash dialect of the Belters, and so on. The meticulous production values are worthy of awards and envelop viewers into an imaginative, all-encompassing future that’s reminiscent of sci-fi classics like Blade Runner.

Fortunately, the show also makes the effort to develop the storyline. Watching The Expanse is a lot like peeling an onion. At its core, is a mystery, and we the viewers are forced to figure it out along with the main characters. During the scenes at Ceres, again echoing Blade Runner, we’re presented with a future noir atmosphere that is colder than the space outside the fragile habitats that is hard to look away from. It may be cliché but it’s still effective. 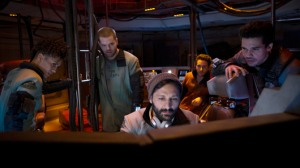 Then the plight of the former Canterbury crew as they witness realistic space battles and life in outer space evoke the grounded grittiness of the Battlestar Galactica reboot only it’s less cluttered with the former show’s ponderousness about lofty themes. At the same time, we’re plunged into this completely immersive and realistically rendered future. The result is a gratifying and involving viewing experience.

The characters are mostly interesting, though some could use more development. They’re all well played with exceptions given to Thomas Jane whose portrayal of Miller would fit perfectly in a Mickey Spillane story and Shoreh Aghdashloo’s dignified performance. However, her scenes often get the short shift in many episodes and many times feel superfluous. For that matter, aside from seeing militaristic Martian crew, we have little to go on how Mars is like except for some spoken descriptions. The red planet and more of Earth are definitely worth exploring in greater detail in future episodes.

Showing some wise patience, Syfy has already renewed The Expanse for a second season. Personally, I haven’t read the books this show is based on (something that will be rectified soon), but I hope that the answers to the core mystery will pay off well. In the meantime, I eagerly look forward to the next episode of one of the best sci-fi shows in recent memory.

One comment on “Syfy’s Brave New Worlds Of The Expanse”