What stands out among Star Trek merchandising are the informative and fascinating reference books that the long-running franchise has spawned. Full of nifty, intricate and intimate details about the Star Trek universe, these Star Trek reference books and manuals are true literary treasures.

While it’s true that many sci-fi TV shows and

films have inspired fiction and making-of books and comics about them, these Star Trek reference books  and manuals were among the earliest tie-ins of their kind to come out, and were unique at the time. Now the book market is flooded with all sorts of tie-in reference books like Star Wars: The Visual Dictionary and so forth. These books were possible due to the imagination sparked by Star Trek that led many to ponder and speculate on the minutiae of the Star Trek universe. How fast did the Enterprise travel? Where was Captain Picard born? What is Romulan ale? The answers to these questions helped fill in the gaps for fans hungering for more knowledge about the fictional Star Trek universe. 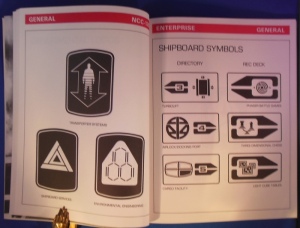 Perhaps the best early examples of such books were Star Trek: Star Fleet Technical Manual and Mr. Scott’s Guide to the Enterprise. Much of the information would be decanonized and wound up contradicting what appeared on screen. For example, in The Worlds of the Federation the Klingon home planet was called Kling instead of Qo’noS as later established onscreen. That didn’t matter to hardcore fans who reveled in explaining away contradictions as the books helped give the impression that the wondrous Star Trek technology and universe actually existed.

More recent forays into these fictional reference books have branched off into atlases, dictionaries, travel guides and even a Klingon version of Hamlet. The best of these books include

Star Trek: Star Charts: The Complete Atlas of Star Trek, Star Trek  Chronology: The History of the Future and The Star Trek Encyclopedia: A Reference Guide to the Future. These three books warrant repeat reading and are bursting with the tiniest details and information about Star Trek, not to mention beautiful artwork and charts. For instance in Star Charts, it traces the course of the U.S.S. Voyager on its journey back to the Alpha Quadrant. In the Star Trek Chronology we can trace the timeline of James T. Kirk from his birth (in Iowa, not some starship!) to the moment of his death. While The Star Trek Encyclopedia lists all the ships in their classes, detailed descriptions of three-dimensional chess, episode listings and provides detailed bios on many Star Trek characters.

Of course, these books came out some time ago and much of it is outdated. However, they have enough material to keep anyone busy and seriously, Pocket Books should look into producing revised hardcopy 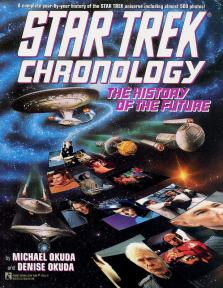 versions of these books. This was actually done for both the Chronology and the Encyclopedia back in the late ’90s, so the precedent exists.

Thankfully being that this year is the 50th anniversary of the original Star Trek more books are coming our way. One of the most interesting of the lot is Hidden Universe Travel Guides: Star Trek: Vulcan by Dayton Ward. As long as Star Trek continues to inspire the imaginations of both writers and fans, there will always be more captivating reference books that can be poured over for hours at a time.

The following are the ten best Star Trek reference books and manuals released to date:

9. The Worlds of the Federation by Shane Johnson

7.  Mr. Scott’s Guide to the Enterprise by Shane Johnson

2. The Star Trek Chronology: The History of the Future by Michael Okuda and Denise Okuda

1. The Star Trek Encyclopedia: A Reference Guide to the Future by Michael Okuda and Denise Okuda