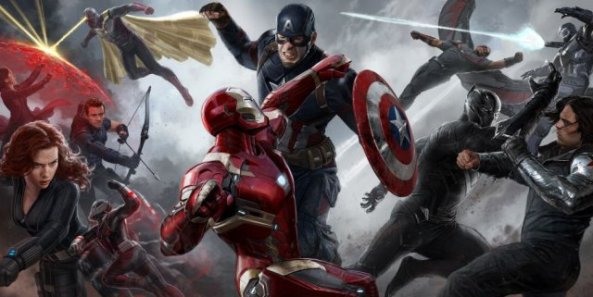 Wow that was intense! Marvel Studios just released the second trailer for May’s Captain America: Civil War and it is just jammed full of “Wow!” moments, especially at the end (more on that later).

Even though Batman v Superman: Dawn of Justice is taking center stage lately and for good reason, I get the feeling that come May, the DC movie will be forgotten once Captain America: Civil War comes out. It’s because by now, we’re all familiar with these beloved characters on screen (and the actors portraying them) and have rooting interests on one side or the other. Iron Man (Robert Downey, Jr.) is well entrenched and uber popular thanks to Downey’s performances and the good memories from the first Iron Man film. As for Captain America (Chris Evans), seemingly overnight, well ever since the release of Captain America: The Winter Soldier, he became a star that is popular with the masses.

This trailer has so many terrific scenes, such as Ant-Man (Paul Rudd) jumping off that arrow, or War Machine’s (Don Cheadle) literal fall to Earth. But the big surprise was the end reveal of Spider-Man (Tom Holland) and he looks terrific and spot on! He vaguely sounds like the Andrew Garfield version of Spider-Man but the costume looks more authentic to the comic book version. But why does he have to be on Team Iron Man? Iron Man is such a tool. Anyhow, enjoy this second trailer for Captain America: Civil War…