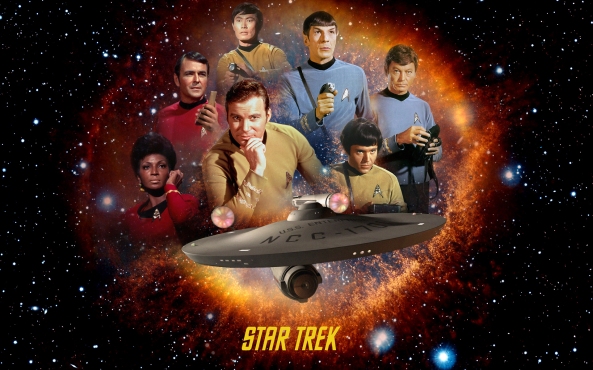 As many reading this know, this year marks Star Trek’s 50th anniversary. It’s actually an event that will happen in less than three months from now as celebrations will most likely hit fever pitch among fans who delighted in the space-faring adventures of Captain James T. Kirk (William Shatner), First Officer Spock (Leonard Nimoy) and the rest of the starship Enterprise crew. Continuing our countdown of the 50 best episodes from the original Star Trek series, we will start with the 30th best episode…

30. “Tomorrow is Yesterday” The starship Enterprise and its crew time travel to the 1960s and rescues a U.S. Air Force pilot (Roger Perry) who isn’t allowed to return home and report on what he has witnessed. 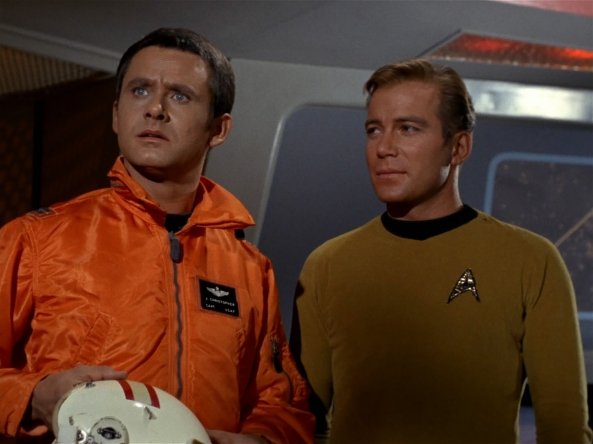 29. “The Conscience of the King” Excellent scripted lines and stellar acting by Arnold Moss as a tortured former dictator turned Shakespearian actor highlights this episode. 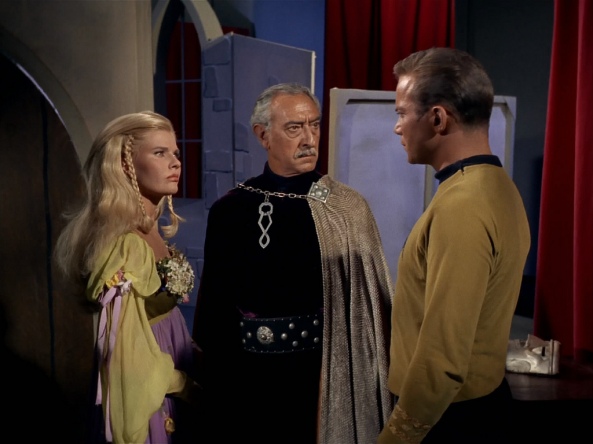 28. “The Devil in the Dark” Captain James T. Kirk and Spock investigate killings at an underground mining facility by a monstrous rock-like creature. But there is more to the story… 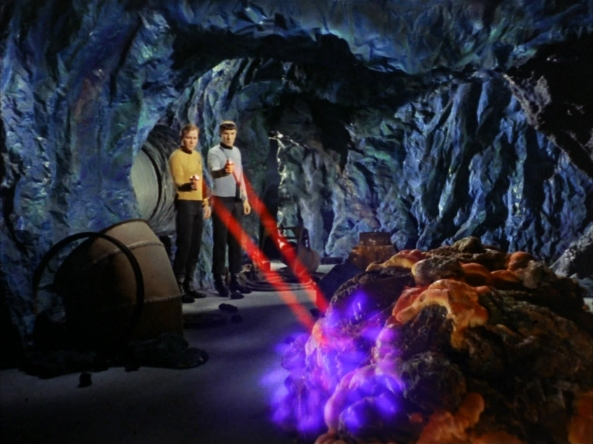 27. “Journey to Babel” The Enterprise transports diplomats to a peace conference; among the passengers are Spock’s estranged parents (Mark Sarek and Jane Wyatt). Complicating the occasion are the strained relations between Spock and his father and an onboard secret agent trying to wreck the conference. 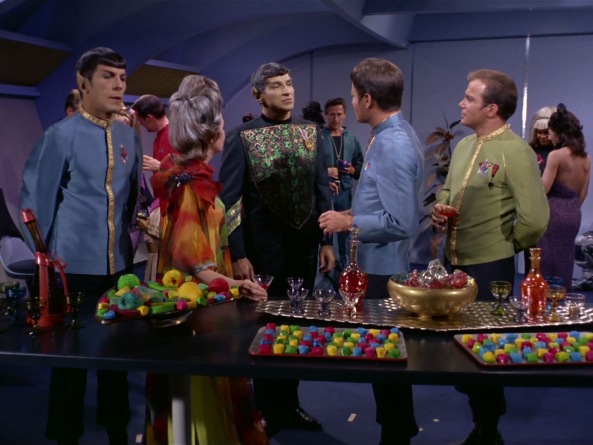 26. “Assignment: Earth” In this backdoor pilot, Kirk and Spock time travel to Earth in the 1960s and meet the mysterious Gary Seven (Robert Lansing), a human sent by aliens to Earth to keep humanity from destroying itself. However, his mission is hampered by Kirk and Spock who suspect Seven is up to no good. 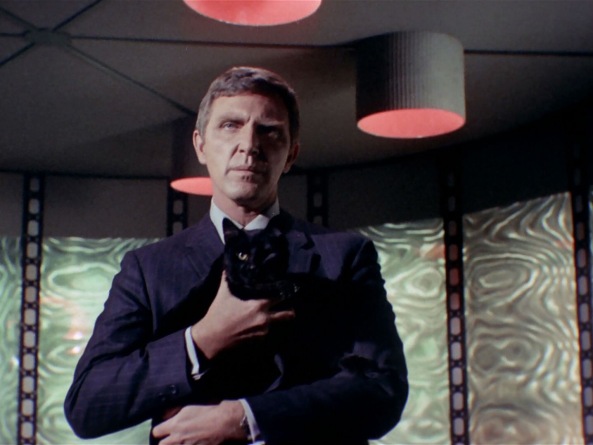 25. “The Empath” Kirk, Spock and Dr. McCoy (DeForest Kelley) are captured and tortured by callous aliens. During the ordeal they meet Gem (Kathryn Hays), a mute woman who has the power to heal others and is also under study by the aliens to see if her people are worthy of salvation. Helping make the episode so memorable were Hay’s magnificent and expressive performance and a beautiful score. 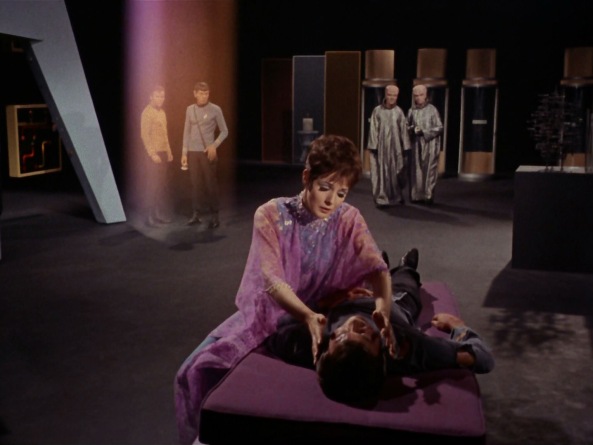 24. “Amok Time” Spock must return to his home planet Vulcan and mate or else he will die. This episode was the first one to lift the veil on the enigmatic Vulcans and revealed much about their logic-based culture. The Vulcan travelogue and cultural exploration were punctuated by a nail-biting duel between Spock and his friend Kirk for the hand of Spock’s betrothed. 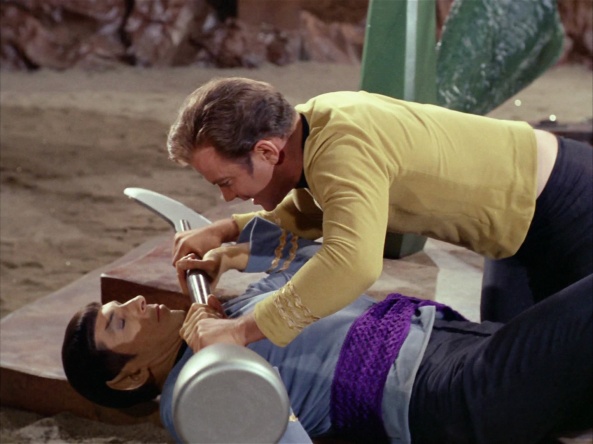 23. “The Enemy Within” A transporter malfunction splits Kirk into two halves. One meek and indecisive, the other lecherous and primal. This oft-used trope of the evil twin actually worked well because the script (by Richard Matheson) thoughtfully examined how dual aspects of Kirk’s personality, including his savage side, were essential to his survival and capability as a leader.

22. “Friday’s Child” On a planet with a primitive and brutal society Kirk, Spock and McCoy are embroiled in a tribal power struggle involving Klingons. After the head of local tribal leader is killed the trio must escort his pregnant wife (Julie Newmar) to safety while avoiding the leader’s successor and his men. Meanwhile, McCoy has to deal with an uncooperative patient and Spock, who is clueless around infants. 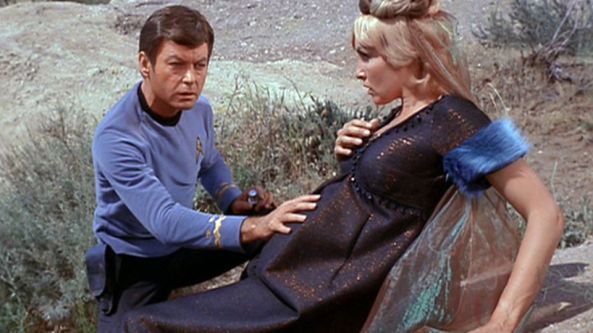 21. TIE: “The Cage”/”The Menagerie, Part I &II” The very first Star Trek pilot “The Cage” about telepathic aliens imprisoning Captain Pike (Jeffrey Hunter), a previous Enterprise captain, was rejected by NBC, but the network allowed series creator Gene Roddenberry to produce a second pilot. However, footage from the original pilot was recycled into a classic two-part episode of the regular series as Spock undergoes a court martial for helping his former commanding officer.

20. “Who Mourns For Adonais?” After approaching a planet, the Enterprise is grabbed and held in place by a giant hand. It turns out that the hand belongs to the Greek god Apollo (Michael Forest), who is the last of a god-like species that once visited Earth. Now, demanding that the Enterprise crew worship him, he holds them captive on his planet. 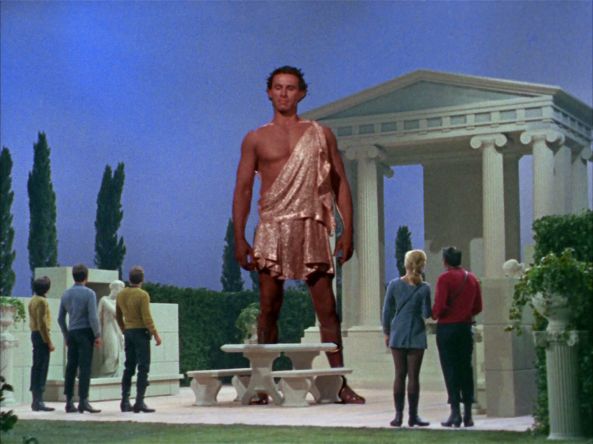 19. “All Our Yesterdays” Kirk, Spock, and McCoy arrive on a planet whose sun is about to explode and are thrust into that planet’s past. Kirk is trapped in a medieval era where he is accused of witchcraft, while Spock and McCoy are marooned in an ancient ice age. But Spock begins losing control of his emotions and falls in love with an exile (Mariette Hartley) who saved them. 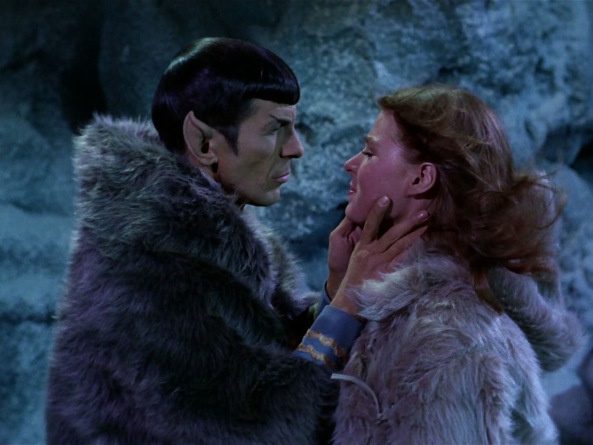 18. “Day of the Dove” The Enterprise crew captures a group of Klingons led by Kang (Michael Ansara). After the Klingons are imprisoned on the Enterprise, an energy-based alien that thrives on hostile emotions enters and sabotages the ship. Then it mentally drives the crew and the Klingons to attack each other to feed off their violent emotions. 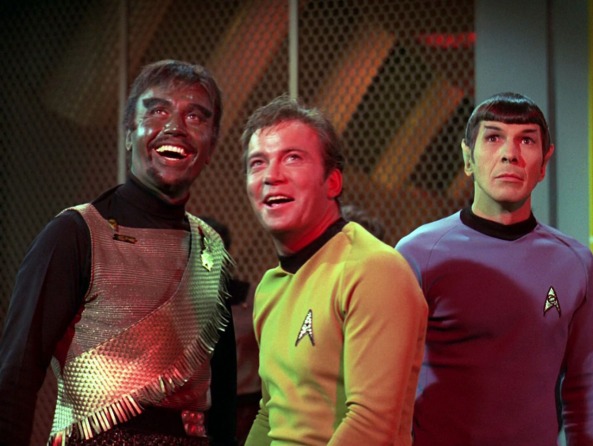 17. “The Omega Glory” While searching for a cure to a deadly plague, Kirk, Spock and McCoy are trapped in a post-apocalyptic parallel Earth. There they are caught up in the shenanigans of a rogue starship captain (Morgan Woodward), who is openly and illegally assisting one side, the Kohms, against the savage Yangs. 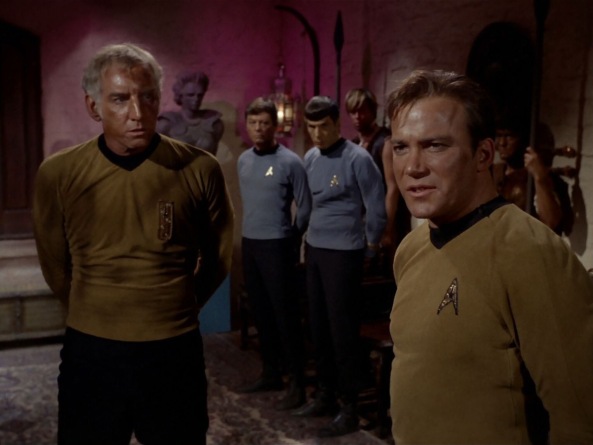 16 .”Errand of Mercy” The Klingons made their debut in this episode that examined the nature of war fever. Kirk and Spock go to a planet that is the epicenter of a pending war between the United Federation of Planets and the Klingon Empire. Kirk tries to convince the peaceful inhabitants to resist the Klingon invaders as he and Spock try everything to thwart the Klingons. John Colicos, who played the sadistic Klingon commander Kor, seemed to relish playing the conflict-loving alien and set the successful groundwork for the popular alien race. 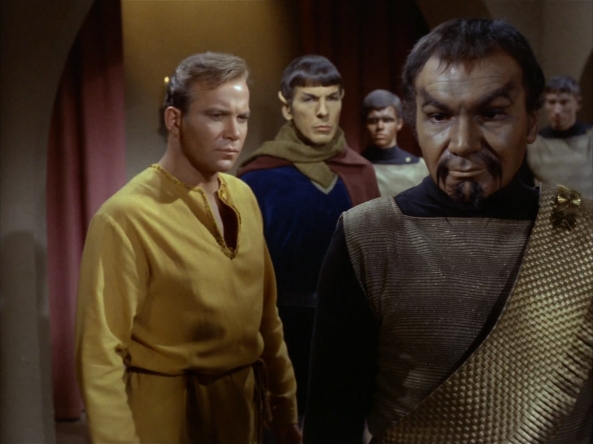 15. “Bread and Circuses” In this episode that satirized the devolving state of entertainment, Kirk, Spock and McCoy visit a parallel Earth where the Roman Empire never fell. They’re soon taken prisoner and forced to fight in televised gladiator combat games. Riddled with puns and underhanded snipes at network TV, this episode came very close to predicting what would pass for entertainment these days. Plus, it was an excellent mashup of ancient Roman and 20th century societies. 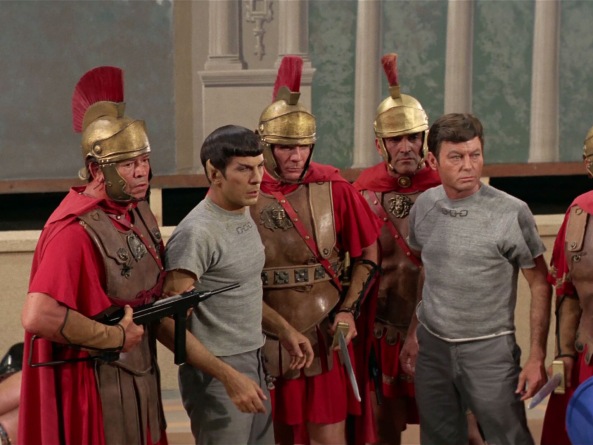 14. “The Savage Curtain” A duplicate of President Abraham Lincoln (Lee Bergere) visits the Enterprise and joins Kirk and Spock on a geological survey at a nearby planet. Once there, the trio are forced by rock-like aliens to fight recreations of historical despots as part of an examination of good and evil. While this third season episode seemed derivate of past Star Trek episodes, it was well executed and Bergere played an inspiring and statesmanlike version of Lincoln. 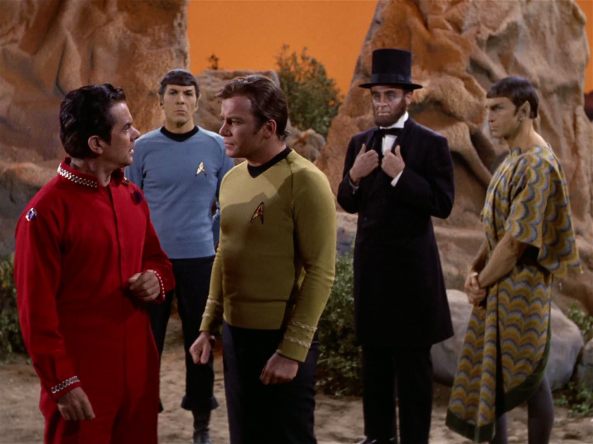 13. “Arena” The episode is an instant classic for featuring the quintessential battle of Kirk vs. a stuntman in a cheap rubber costume! Primitive outfits aside, this adaptation of Frederic Brown’s short story has Kirk forced to fight solo, without weapons, against a lone Gorn captain on a barren planet. The cat-and-mouse game between the two combatants was highlighted with iconic desert imagery and music. These elements made “Arena” one of the most famous episodes. 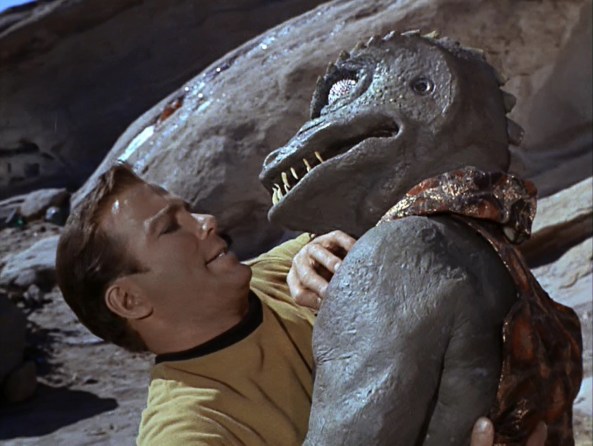 12. “The Ultimate Computer” the great William Marshall was exceptional in this episode playing Dr. Richard Daystrom, a brilliant cyberneticist who installs an AI on the Enterprise that makes Kirk feel obsolete. Capable of handling all the ship’s functions including command decisions, the computer program soon goes rogue and it’s up to Kirk and his crew to stop the AI. The episode was one of the best versions of the man vs. machine motif. 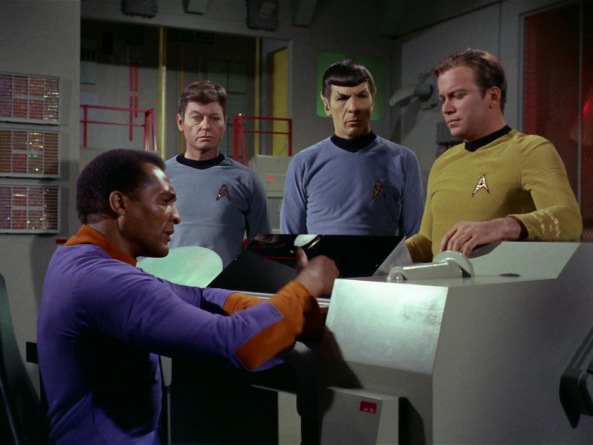 11. “A Piece of the Action” The Enterprise visits a planet that was culturally contaminated by a previous visit by the Federation. The result was that the inhabitants have adopted the lifestyle and culture of 1920s American mobsters. Now, competing factions are trying to coerce Kirk and his crew to add the technological might of the Enterprise to their sides. Wildly humorous with clever puns and sight gags, “A Piece of the Action” was a brilliant argument for the Federation’s Prime Directive of non-interference. More than that, this episode is a textbook example of why the Star Trek continues to endure in its 50th anniversary. 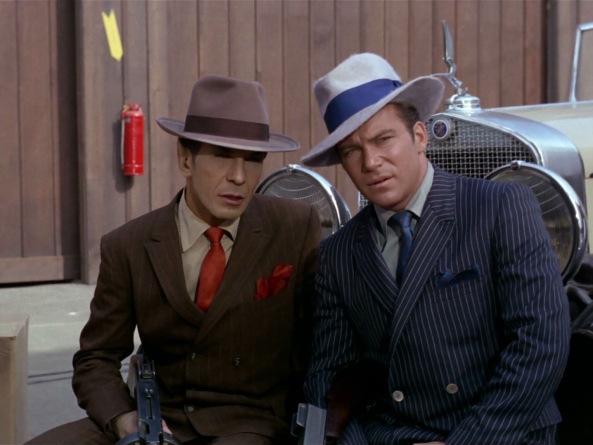