The latest Star Trek film, Star Trek Beyond, is unlike other Star Trek films, but shares many qualities of the best of them. It is a fun thrill ride that has heart and character development and takes audiences along into a grand adventure.

The way this film is different than other Trek films is that it takes place in deep space, nowhere near Earth and all the trappings of the Federation and nearby space. No Klingons, Romulans or other familiar trappings that have started to stifle Star Trek, even the reboot films. Star Trek Beyond feels completely original because it doesn’t try to ape lines and scenes from other films and in doing this the film feels very fresh and is the jolt that the franchise needs.

At the same time, this film pays respectful homage to the original Star Trek and especially Star Trek: Enterprise. To explain how would spoil too much of the film’s plot.  Star Trek Beyond takes place in the third year of the Enterprise’s five-year mission. Captain James T. Kirk (Chris Pine) is feeling burned out in his job and is thinking of taking on a new challenge. Soon after, the Enterprise arrives at this magnificent Starbase called Yorktown, which is more like a floating city or colony unbound by gravity. The scenes that show off the splendor of the Yorktown base are jaw dropping and is unlike anything seen in most films and bring to mind many literary sci-fi orbital cities.

An alien woman in a spaceship arrives and asks for help rescuing her crew past a nearby nebula. The Enterprise is sent through the nebula and on the other side is attacked by swarm-like ships. Quickly, the small ships overwhelm the Enterprise and actually rip it apart. This forces Kirk to evacuate the ship and this splits up the main cast, who take refuge in a nearby planet. Separately, the bridge crew struggle to survive and stay one step ahead of the alien swarm. With most of the ship’s crew captured by the aliens on the planet, Kirk has to find a way to marshal his resources to free his people and defeat the aliens. Splitting up the main characters is a good move since they’re given their standout moments. An interesting thing to note is that the cast looks noticeably older now but fit the iconic roles better because of this factor. It is much easier to buy these actors as the characters they’re interpreting.

As usual, Karl Urban steals the film with his dead-on 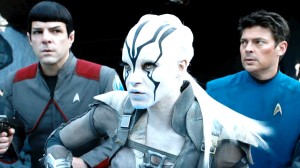 impersonation of the late DeForest Kelley doing Dr. McCoy. He gets most of the funniest lines and his scenes with Spock (Zachary Quinto) allow the two characters to bond and echo the classic banter between Kelley and Leonard Nimoy. Other stand out characters are Scotty (Simon Pegg) and his alien ally Jaylah (Sofia Boutella) who rescues Scotty on the planet. Jayla is full of fire and is a breakout character in the Star Trek films. The villain in this film, the aliens’ leader Krall (Idris Elba), is one tough foe who is after an alien artifact that was on the Enterprise. But what makes him stand out is his backstory, which makes him one of the most unique Star Trek villains on film or TV.

On the whole, Star Trek Beyond is consistently fun to watch and goes a long way to validate the reboot in ways that the past two attempts did not.

At the same time, the film took time out to have some quiet character related moments that add heart and nuance. It was very welcome and overall strikes a good balance with the flow of the film. Do not be put off by the first trailer which did not represent the film’s tone at all. Anyone involved with that trailer should not be allowed near another Trek film because of the way it gave the wrong impression about Star Trek Beyond. It needs repeat viewings to confirm that this is the best of the three reboot films and one of the better entries on the whole. After some shaky summer releases Star Trek Beyond is just what was needed. It’s a terrific and reverential way to celebrate Star Trek’s 50th anniversary thanks to its characters, their interactions, and a non-stop sense of adventure.