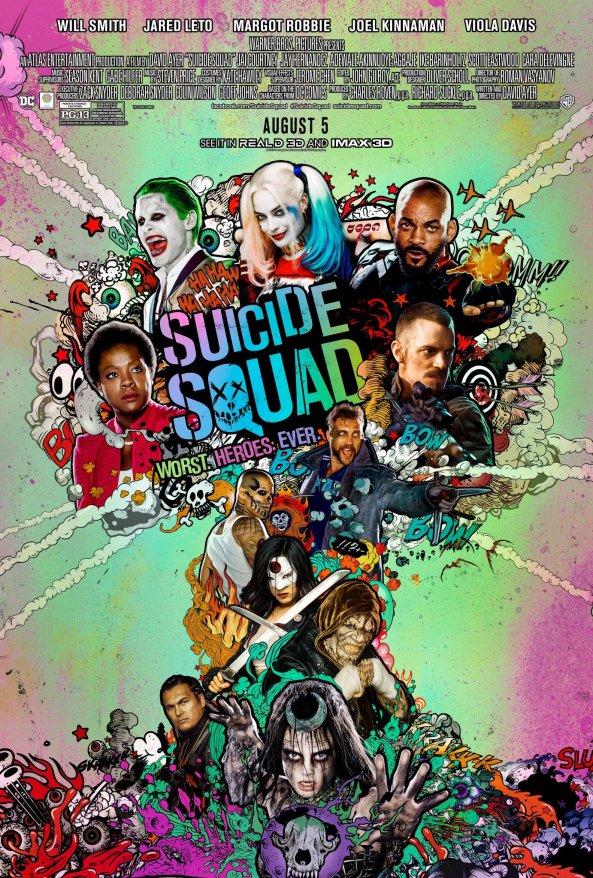 Suicide Squad is the latest DC Extended Universe (DCEU) film and continues the story of a world coming to terms with people possessing extraordinary powers or meta humans as they are called. The U.S. government responds to Superman’s status (not going there with spoilers!)  by creating a task force of super criminals to combat any paranormal events that

occur with meta humans at the root of it. This task force led by government official Amanda Waller (played well by Viola Davis) is sent to combat a group of creatures created by a mystical witch named Enchantress (Cara Delevingne) who double crosses the government as she was meant to be a part of the squad. We follow this group as they trek across Midway City, which is under attack by these beings. During their journey, we see their motivations and interactions with each other, which I found to be enjoyable.

As the latest DCEU entry, this film is much different in tone than Batman v Superman: Dawn of Justice with its energetic visuals and soundtrack. Also, it focuses on a large number of characters who are villains in the DC universe. What this movie shares with its predecessor is negative reviews from film critics, but as with Batman v Superman: Dawn of Justice, I think these reviewers are off base.

Suicide Squad works in showcasing the crazy side of the DCEU, with fan favorites like Harley Quinn, who is played very well by Margot Robbie as a psychotic bad girl. She is the Joker’s girlfriend, but also carries her own weight as a truly crazy villain that is also highly unpredictable. Speaking of the Joker, while his screen time is on the short side, Jared Leto does a great job as a Joker who is a sadistic gangster determined to get his girl out of prison and back on his side. The glimpses we get of him will definitely whet the appetite of fans and create a big anticipation for his next appearance in the DCEU, which will hopefully be in the forthcoming Batman solo movie. Other well known characters include Batman villain Killer Croc (Adewale Akinnuoye-Agbaje) and Deadshot (Will Smith), who emerges as the de facto leader of the group. Rounding out the group are Captain Boomerang (Jai Courtney), who has an encounter with The Flash which was nice to see, and Diablo (Jay Hernandez) who plays a pivotal role in the group later in the film. Non-Squad characters include U.S. Special Forces agent Rick Flag (Joel Kinnaman), who escorts the villains on their mission and ensures their loyalty, and his bodyguard Katana (Karen Fukuhara).

We see in interesting flashbacks the background of each of the villains and how they ended up in prison . The best one featured Harley and the Joker being chased by Batman (Ben Affleck), which is something that fans have wanted to experience on the big screen for ages. Batman’s brief encounter with Deadshot is also a thrill and serves to show an expanding shared universe that these movies are creating. While the action scenes can get hectic, the movie also doesn’t take itself too seriously with musical montages appearing when different characters get their screen time. This is also different from the somewhat somber tone of both Man of Steel and Batman v Superman: Dawn of Justice, and it is not a bad thing. While I enjoyed the serious take on superhero stories from the previous films, the fact that this universe also has an irreverent side to it makes it seem larger and more varied which is just like the real world. Different places have different people and will not feel the same. This should be the case in a shared universe as well.

I would like to have seen more of the Joker and what he was doing while the Suicide Squad was rampaging through the city. Leto’s performance was that good, comparable to Heath Ledger’s take of the Clown Prince of Crime. He was advertised a lot for the film and is the most interesting of all the DC villains. Interesting enough, he displayed more affection for Harley Quinn than he did in the animated series. I also wanted to see some interaction between Killer Croc and Batman, but the two did not cross paths in this movie. It is mentioned that Batman chased Croc out of Gotham but sadly that is not shown. I think they may be saving all of this for Batman’s solo film, which is rumored to take place in Arkham Asylum and include all of the Caped Crusader’s foes.

Overall, I had a good time watching this film and would definitely like to see a followup that expands on this group of DC baddies taking on whatever is thrown their way. The ending does seem to imply that their adventures will continue in some fashion, and the mid-credits scene helps to set up the Justice League movie as well as hint that the two groups will have some interaction in the future. Here’s hoping that will happen. Regardless, Suicide Squad is another solid entry in the growing DCEU lineup and I continue to look forward to the next films coming out next year. They include Wonder Woman and Justice League, both of which had interesting trailers in Comic-Con and will hopefully add more pieces to the DC movie universe. Suicide Squad is indeed a unique piece of it.

4 comments on “Suicide Squad: An Energetically Wild Entry In The DCEU”