Here we are celebrating Star Trek’s 50th anniversary, a milestone that many doubted would ever be reached. For good reason, Gene Roddenberry’s phenomenal TV show about Captain James T. Kirk (William Shatner) and the starship Enterprise should have been forgotten after it was cancelled after three seasons. However, Star Trek was special, it was more than weird, low-budget sci-fi trappings with empty fisticuffs. Star Trek concentrated on ideas, social commentary and characters. As long as each incarnation of Star Trek stuck to these core ideals it clicked with the general public and fans. But as with everything, Star Trek went through cycles and sometimes lost sight of what made it so reverential. Aside from the cancellation of the original series where fans went through a decade-long drought without any live-action fixes, another dark period happened more recently. 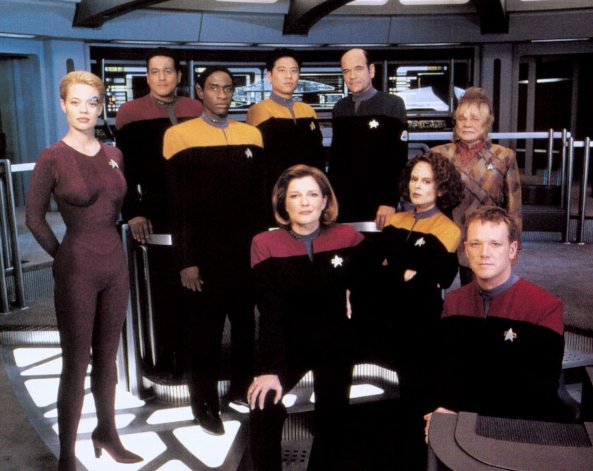 Oddly enough, Star Trek started to burn out and lose its edge story and character wise when it was at its peak in the mid ’90s. There was a feeling of overkill as Paramount Studios was all too eager to cash in Trek’s popularity. The show that suffered from this the most was Star Trek: Voyager with its formulaic scripts. Before the third spinoff was created, there was some griping about Star Trek: Deep Space Nine because it was considered too dark and strayed too far from what was perceived to be the core of Star Trek: exploring the universe in a spaceship. Due to these complaints and because Paramount wanted to milk the cash cow, a new spinoff was created that went back to the old spaceship formula for its new TV network UPN. Star Trek: Voyager was lauded for having Kathryn Janeway (Kate Mulgrew), as the franchise’s first lead woman character and for its basic premise of a lost Starfleet ship making its way back home, but apart from that the show had creative problems. It felt too similar to Star Trek: The Next Generation with familiar stock characters. What was worse, were the predictable stories that were riddled with plot holes. Why was the ship so pristine looking every week? We wanted to see the actual ordeal of being stranded and away from support. It didn’t feel realistic, especially with the way they always defeated the super-powerful Borg whenever they showed up. Still, Star Trek: Voyager had its highlights, particularly Seven of Nine (Jeri Ryan), an ex-Borg who filled in the Spock/outsider role.

By the time Star Trek: Voyager concluded its run and Enterprise premiered in 2001, the franchise was undeniably creaky and tired. The film series were now bringing in less and less profits, seemed listless and unfortunately, Enterprise suffered from the same problems. On paper, Enterprise had potential; the adventures of the very first starship Enterprise commanded by Jonathan Archer (Scott Bakula) and his crew as the first humans to voyage to the Final Frontier. The prequel/spinoff instead of truly exploring the foundation of the Star Trek universe literally recycled plots from Star Trek: The Next Generation and when it didn’t the stories were uninspired. Simply put, it did not feel fresh and relied too heavily on the trappings of the Star Trek universe. For instance, transporter technology was supposed to be largely untested, yet all too quickly the scriptwriters relied on it to get our heroes out of jams.

The show’s creators Rick Berman and Brannon Braga tried jumpstarting the show in the third season, added Star Trek to the title, and created a season-long arc about a mission to save Earth from destruction by aliens. The storyline divided many fans who felt it was too violent and dark versus others who thought the moral dilemmas and high stakes were what the show needed. No matter where one stood in the argument it was clear that this version of Star Trek was influenced by current events, in this case 9/11.

It was only in the final season did the show find its moorings and actually became a true prequel, but it was too late. Just as with its ancestor, the original Star Trek, Star Trek: Enterprise was cancelled in 2005 because of low ratings. The film series quietly died also after Star Trek: Nemesis flopped in 2002. The general consensus was that the property was completely mined out and devoid of any new material. Many felt that unlike previous lulls and failures that it was time to let the franchise rest. As Star Trek approached its 40th anniversary it seemed as if it was truly gone for good because of a lack of any initiative to develop new material let alone celebrate the anniversary.

That perception is not entirely accurate. Although there wasn’t any new Star Trek content, it did live on. The merchandising, while not as prevalent as in the past, helped. Another shot in the arm were the numerous fan films that carried the torch for the original crew. It’s true the production values and acting weren’t quite up there with professional productions, but it was clear that these films were lovingly made and some of them are actually impressive. At the same time, Paramount (and later CBS Studios) tried to create new films and TV shows. For instance, one film was called Star Trek: The Beginning and would’ve taken place during the Romulan War and featured Kirk’s ancestor, Tiberius Chase. Sadly, the script never went anywhere. Others pitched ideas for new TV shows including one that would’ve taken place in the far future in the aftermath of a galactic catastrophe that crippled the Federation. However, all those developments went by the wayside when Paramount hired J.J. Abrams to reboot the franchise with a new film.

2009’s Star Trek retold the story of Kirk, Spock, McCoy and the original Enterprise crew. But now they were played by much younger actors and the entire Trek universe received an updated makeover. On the whole, the film and its sequels were a faster paced, action oriented version of Star Trek. The first rebooted film was a huge box office success and many loved it. The problem, which became more obvious in later films, is that these films were catering to non-fans who wouldn’t show the same brand loyalty as regular Star Trek fans. With an emphasis on quick action shots and explosive special effects, the three most recent films alienated many traditional fans who likened the new films as Star Trek For Dummies. That perception crystalized when the ill-conceived trailer for Star Trek Beyond was released last year.

It is still too early to render a verdict on the reboots. It may be some time before the fervor dies down and we can all look upon them objectively. But as of now, many are decrying that the reboots are not real Star Trek and want a return to the original universe.

Fortunately, that is about to happen as Star Trek returns next year to the medium it is best suited for, television. The excitement building up over the forthcoming Star Trek: Discovery only proves that Star Trek isn’t dead or fading from the public consciousness.

Other popular franchises may be getting more attention these days, but Star Trek has shown time and time again that it has appeal and staying power. The effect the film and TV series has had in pop culture is immeasurable. To dismiss the franchise at this point is foolish in light of its legacy, which is far spanning.

Star Trek helped make science fiction a mainstay in television and elevated the genre’s perception from low-brow, youth-oriented fare thanks to its imaginative and thoughtful episodes. That is why the original show (and Star Trek: The Next Generation) received Emmy Award nominations for best series. It helped lead other executives and networks to gamble more often on sci-fi series, some of which are stellar examples of the genre. But Star Trek has had more of a meaningful impact in our society.

As we celebrate Star Trek’s 50th anniversary, we should reflect on its greatest legacy which is how it inspired the world. There are countless accounts of how Star Trek had a positive influence among astronauts, doctors, engineers, scientists and everyday people like you and I. The show and its spinoffs helped us to learn not to fear the future but to embrace it. Thanks to Star Trek, many beneficial inventions like cell phones, 3D printers, medical scanners and more became a reality due to its fictional counterparts in Star Trek. More importantly, the show taught us about how to treat our fellow neighbors. Everyone knows how the show and its spinoffs were cultural  trailblazers with its focus on characters like Mr. Spock (Leonard Nimoy), Data (Brent Spiner), Seven of Nine (Jeri Ryan) and the Doctor (Robert Picardo). They were outsiders who had trouble fitting into their society due to being different. Past episodes dealt with prejudice as their plights touched upon civil rights, tolerance, respect and looking past outer differences and into the character of the soul. This belief can best be exemplified by the Vulcan IDIC philosophy of Infinite Diversity in Infinite Combinations. This more perfect future society is beyond our reach today, but we are laying the groundwork to make Gene Roddenberry’s optimistic vision a reality someday.

Star Trek will always be a part of our pop culture as it has been for the past 50 years. That is because it has so many aspects that are appealing to many different audiences. As long as Star Trek embraces its core roots, it will continue to live long and prosper. So may we all.