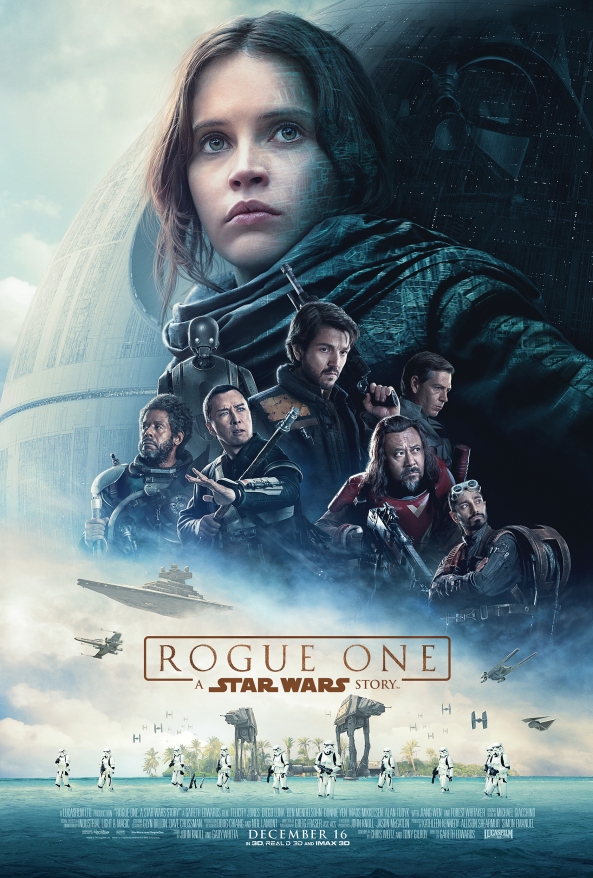 Rogue One: A Star Wars Story is the newest film for the epic space saga from Lucasfilm and is a great action movie as well.  It tells the story of how the Rebel Alliance was able to procure the plans for the Empire’s super weapon the Death Star. It involves a young woman named Jyn Erso (played by Felicity Jones) who is recruited by the rebels to find her long lost father, who is an imperial scientist and in charge of making the weapon. She is accompanied by Cassian Andor (Diego Luna), a rebel spy and his cranky, but useful, droid K-2SO (Alan Tudyk). Their journey across several new worlds tells an exciting tale that has a feeling of dread as the Death Star is shown reigning death upon worlds in anticipation of its later appearance in the original Star Wars Episode IV: A New Hope. 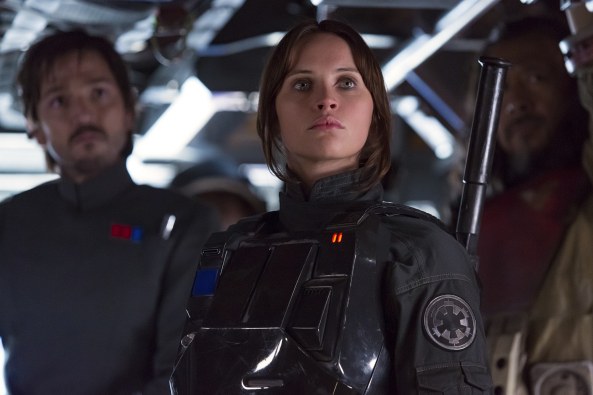 Godzilla director Gareth Edwards does a very good job portraying the action, both on the ground and in space, with a gritty feeling that is somewhat different from previous films in the series. The intense firefights between rebel soldiers and storm troopers really give the impression of a huge struggle between bitter foes in a long war for survival. The action in space is just as impressive with camera views from the top of X-Wing fighters that give the feeling of actually being up there in the middle of all that chaos.

Another very interesting aspect is the use of characters from the original film that make an appearance. First and foremost is Grand Moff Tarkin played by Peter Cushing. Yes, Peter Cushing, who died in 1994. He was digitally recreated for this film and has many scenes in the movie. It’s not just a brief cameo and his presence is something to behold. Other classic characters who appear include a brief appearance by Princess Leia and, of course, the iconic villain Darth Vader. His return is also brief, but very powerful, especially towards the end when he is seen in action and he is brutal and terrifying. It was also nice to see Jimmy Smits again as Bail Organa and does link the prequel era to the original set of films. 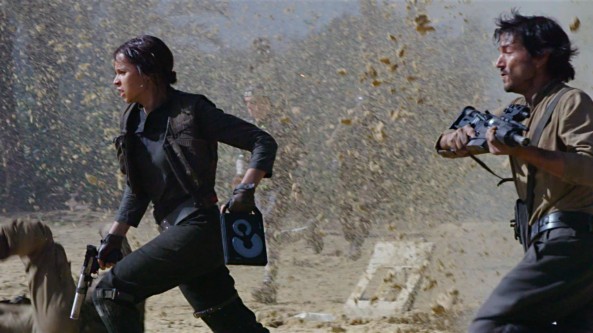 One issue with the movie is that since there were many new and different characters to introduce, some of their characterizations were thin. As a result, when our heroes began to make their inevitable sacrifices for freedom, there wasn’t as much of a feeling for them as there would be if we got to know them a little bit better. This was somewhat inevitable though, since the story does have to revolve around Jyn and both her search for her father, as well as redemption for him. Nevertheless, audiences are still able to appreciate what the rebels lost and see how costly the battle to gain the Death Star plans was for the Alliance. We also see a new Imperial villain, Orson Krennic (Ben Mendelsohn) who is the head of weapons research for the Death Star. His rivalry with Tarkin over control of the battle station and brutal tactics against rebel worlds is effective at showing the sinister side of the Empire, as well as the its repressive nature for both its subjects and those serving in its ranks.

The climatic battle at the end of Rogue One: A Star Wars Story is set on the planet Scarif. It is a real highlight and the battle is destructive and almost apocalyptic end goes to show what is really at stake for the galaxy. The final scenes tie directly into the beginning of Episode IV and it makes this film the perfect companion piece to the 1977 classic. Overall, I enjoyed this new foray into the Star Wars universe and see it as a ground level view of the whole conflict between the Rebel Alliance and Galactic Empire. I would really like to see another Star Wars film by Gareth Edwards, perhaps set between A New Hope and The Empire Strikes Back and hope that other directors are inspired by his vision of this universe created by George Lucas.