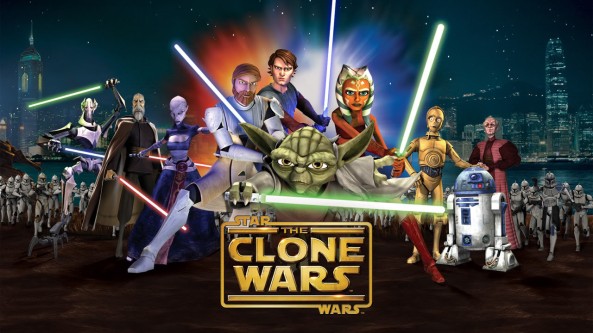 Star Wars: The Clone Wars was an epic TV series that vastly expanded the Star Wars canon and was a boon for Star Wars fans after the conclusion of the prequel trilogy in 2005. The animated show originally aired on the Cartoon Network from 2008 through 2013 and since then has been available to stream on Netflix. However, Netflix will stop streaming it very soon (March 7, 2017) and the only way to see this terrific series is through downloads or DVDs/Blu-rays. It has lots of devoted followers because it had so many different adventures and stories that spanned the galaxy and showed the reach of the huge conflict that engulfed the galaxy. Star Wars: The Clone Wars also took its heroes to so many different places, not just physically, but in terms of their lives and development as characters. Here are 10 of the best story arcs and episodes of the show. 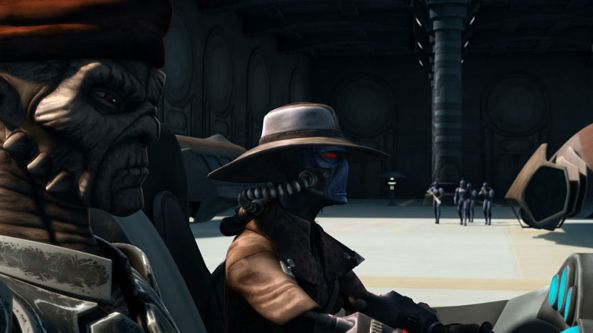 10. “Hostage Crisis” Season 1, Episode 22: The first season finale of Star Wars: The Clone Wars introduced the notorious bounty hunter Cad Bane and it was a memorable debut. He was someone who specialized in hunting Jedi, thus, he has armor at the sides of his neck to prevent Force chokes. The cruel executions of hostages in his invasion of the Senate building was both shocking for an animated series and also let the audience know that he was no pushover. His later appearances in the show further cemented his place in Star Wars: The Clone Wars as a great adversary for its heroes. 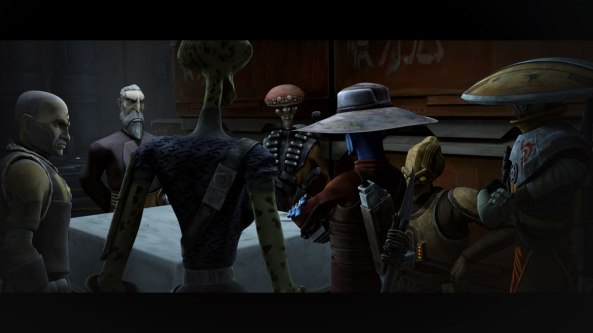 9. “Obi-Wan Undercover” arc Season 4, Episodes 15-18 (“Deception”, “Friends and Enemies”, “The Box”, and “Crisis on Naboo”): A very interesting storyline that has Jedi Knight Obi-Wan Kenobi going undercover as a prisoner in a Republic detention facility, in order to gain information about a plot to kidnap Chancellor Palpatine. This arc has him attempting to survive life on the inside, then going on the run with bounty hunter Cad Bane with a vengeful, fellow Jedi Anakin Skywalker in pursuit, who believes Obi-Wan was killed by the person Obi-Wan is impersonating! This story is quite different from the usual Star Wars plot and shows the strength of the show in that it really expanded the idea of what Star Wars could be. 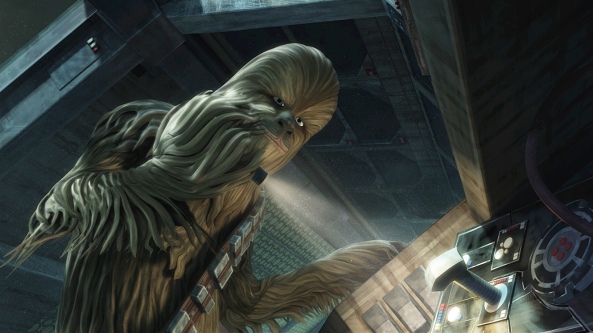 8. “Padawans Hunted” arc Season 3, Episodes 21-22 (“Padawon Lost”, and “Wookiee Hunt”): Another familiar character in a new setting is fan favorite Chewbacca, who appears on the show when Jedi Padawan Ahsoka Tano is captured by Trandoshans and sent to a world to be hunted. She allies with other Jedi padawans to escape and meets Chewie, who was also captured by the Trandoshians. Together, they are able to turn the tables on their captives and escape. Having Chewbacca on the show is a nice link to the original trilogy and demonstrates Chewie’s heroism and resourcefulness, as well as a nice back story to an iconic Star Wars character.

7. “Darth Maul Returns” Season 4, Episodes 21-22 (“Brothers” and “Revenge”) and Season 5, Episode 1 (“Revival”): Darth Maul’s return to Star Wars was a nice surprise for fans of the great Sith villain. The introduction of his brother Savage Opress was also an interesting revelation. Their back story as natives of the world of Dathomir and Opress finding his long lost brother in a state of insanity on a distant Outer Rim junk world with mechanical legs are definite highlights of the show. Maul (obsessed with getting revenge) and his confrontation with Obi-Wan Kenobi was thrilling and a treat for fans of the much maligned Phantom Menace. 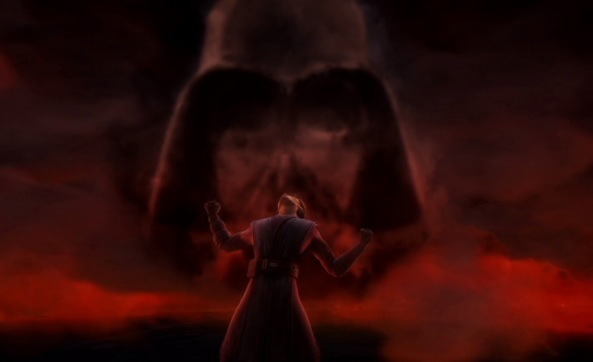 6. “Mortis” Season 3, Episodes 15-17 (“Overlords”, “Altar of Mortis”, and “Ghosts of Mortis”): Anakin Skywalker actually sees his future as Darth Vader in this set of episodes. He, along with Obi-Wan Kenobi and Ahsoka Tano are stranded on the mysterious world of Mortis that has only three beings on it, Father, Daughter and Son. They seem to embody the Force itself and the Son sees Anakin as the Chosen One and gives him a vision of his future as a Sith Lord. This causes Anakin intense grief and pushes him to ally with the Son against the other two. The Father eventually erases Anakin’s memory of his future, thus sparing him further pain, but at the cost of letting Anakin continue on his eventual path to evil. Again, this shows how Star Wars: The Clone Wars puts familiar characters in fascinating situations that were previously unknown to audiences. 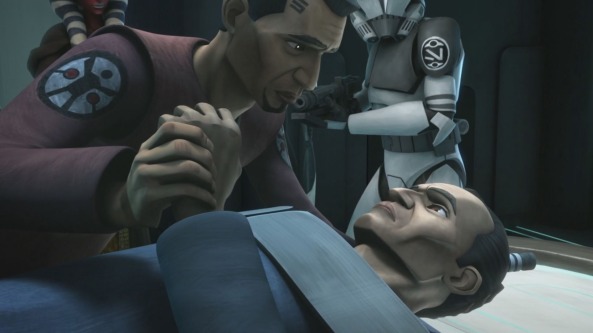 5. “Clone Conspiracy” season 6 episodes 1-4 (“The Unknown”, “Conspiracy”, “Fugitive”, and “Orders”): This group of episodes starts the final season of Star Wars: The Clone Wars on a very ominous note. Clone troopers Tup and Fives are embroiled in a conspiracy which takes them from the clone home world of Kamino to the heart of the Republic on Coruscant, as they try to uncover the reason behind Tup’s sudden violent attack on a Jedi Master. This results in them discovering the secret of Order 66 and Chancellor Palpatine’s plot to destroy the Jedi. Unfortunately, they are thwarted at every step as they try to unmask all of this treachery as Palpatine’s all-pervasive power in the Republic is shown, which will have very tragic consequences for the galaxy.

4. “Landing At Point Rain” Season 2, Episode 5: This episode most embodies the name of the show. A clone war. This action-packed story shows the Jedi and their clone troopers assaulting Geonosis and a massive droid factory. The special effects are great and demonstrate the high quality of the work done for this series. The fighting is both intense and brutal, and demonstrates the horrific cost of Darth Sidious’ plans to embroil the galaxy in this seemingly never-ending conflict.

3. “The Malevolence Trilogy” Season 1, Episodes 2-4 (“Rising Malevolence”, “Shadow of Malevolence”, and “Destroy Malevolence”): This story arc kicks off the show with a bang and has Jedi Knights Anakin Skywalker, his apprentice Ahsoka Tano and Master Plo Koon attempting to destroy a new Separatist warship called Malevolence. These episodes feature great space battles and visual effects and really showcase the huge struggle between the Galactic Republic and Separatist Alliance. They also introduce the iconic Y-Wing bombers to Star Wars canon and demonstrate their usefulness to the Republic and of course, later on to the Rebellion. 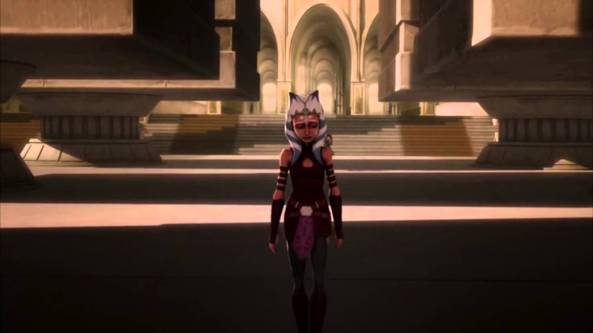 2. “Ahsoka’s Trial” Season 5, Episodes 17-20 (“Sabotage”, “The Jedi Who Knew Too Much”, “To Catch A Jedi”, and “The Wrong Jedi”): Ahsoka Tano’s last appearance in Star Wars: The Clone Wars was both memorable and tragic. She is framed for a bombing at the Jedi Temple and forced to go on the run, chased not only by Republic forces, but also by her mentor Anakin Skywalker. The betrayal she feels at being abandoned by the Jedi Council and her subsequent decision to leave after she is exonerated is one of the most striking events in the whole series. Ahsoka’s last scene shows her sadly walking off into the sunset as her devastated mentor can only watch. This no doubt had a huge influence on Anakin and his feelings toward the Jedi as a whole.

1. “Yoda’s Journey” Season 6 episodes 11-13 (“Voices”, “Destiny”, and “Sacrifice”): The last arc of Star Wars: The Clone Wars and the best one. Master Yoda hears the voice of Master Qui-Gon Jinn and journeys to the Sith home world to find the origin of the Force, all the while his Jedi Council members fear for his sanity. This last series of episodes goes right to the heart of Star Wars mythology and shows how Master Yoda was able to persevere in the dark times of the Empire; by using the lessons he learned from his departed friend and from the Force itself. His last words in the final episode of learning lessons that will help not only during the Clone War, but for all time, demonstrate the lasting power of his wisdom.
C.S. Link