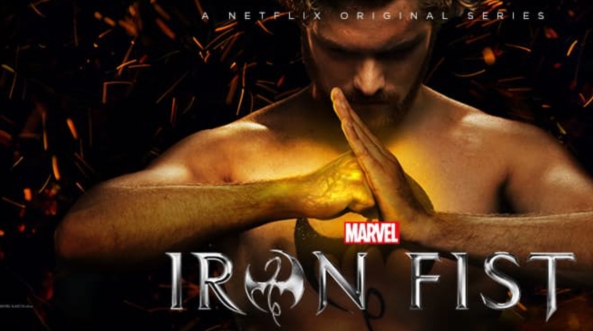 The latest Netflix/Marvel TV show set in the Marvel Cinematic Universe (MCU) is Iron Fist. The main character and his story are based on the Marvel Comics hero created by Roy Thomas and Gil Kane. As the final piece of the superhero puzzle that will make up this year’s Netflix mini-series, The Defenders, Iron Fist has been mired in controversy. Most of it having to do with charges of that the title character is just another white savior type since he emulates a stereotypical Asian monastic lifestyle. Other complaints about Iron Fist are that it is slow moving and uninvolving.

These criticisms levied at Iron Fist are unfortunate because it’s generally an enjoyable, well-produced entry of the MCU. It does have its share of problems and is not as engaging as Daredevil or Jessica Jones. On the other hand, after last year’s disappointingly dull and overacted Luke Cage, Iron Fist is a course correction for the Netflix/Marvel shows.

The TV show centers on Danny Rand (Finn Jones), a homeless heir to a multinational corporation who reappears in the company’s Manhattan headquarters after he was believed to have died fifteen years ago. In his backstory, he and his parents were in a plane crash in the Himalayas that killed his folks, but he survived and was rescued by monks. They take Danny to K’un-Lun, a mystical, extradimensional city that appears every fifteen years on Earth. Once there, Danny is raised by the monks, learns martial arts and eventually becomes the latest in the line of a mystical warrior called the Iron Fist, the Living Weapon. His duty was to protect K’un-Lun from an evil mystical group called the Hand but is shocked after his return that the Hand are on his native world.

It takes some time for him to convince the world that he actually is Danny Rand. What doesn’t help is that when we first see him he’s barefoot, unkempt and disheveled. He spends much of his energy trying to reconnect with two childhood friends, the siblings Joy and Ward Meachum (Tom Pelphrey and Jessica Stroup), who run Danny’s company and are a couple of corporate douchebags, especially Ward. They see him as either a fraud or worse a genuine threat to their hold on the company that was founded by their fathers. The twist is that Meachum’s father, Harold (David Wenham), who supposedly died years ago, is alive and in hiding. An amoral and abusive type himself, the father takes an interest in Danny Rand’s re-emergence. This is because he sees Rand as an opportunity to take on his enemy the Hand (featured in Daredevil), who have a hold on him. With this in mind, Harold forces Ward to allow Danny into the company. Once in place as a majority shareholder, Danny begins righting the wrongs done by the company. 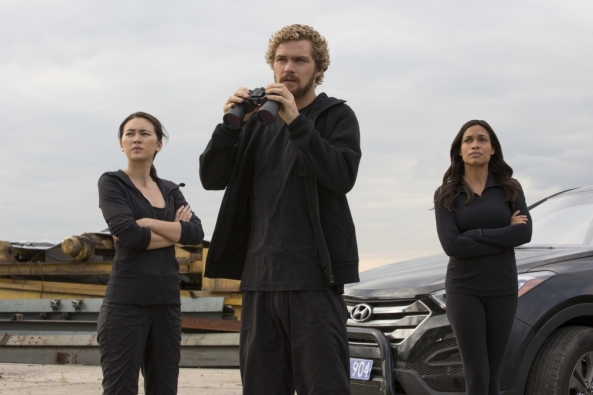 As this corporate plotline unfolds, Danny meets a downtrodden karate instructor Colleen Wing (Jessica Henwick), who operates a dojo, and the two connect. She becomes his partner as he tries to get behind the reason of the Hand’s purpose on Earth and how they are connected to his company.

Iron Fist may not be immediately engaging at first. The first couple of episodes are actually frustrating with drawn out flashbacks of the plane crash and Danny trying to convince people of his identity. While he is sympathetic, Rand comes off as being too naïve and trusting. This leads to a dull stretch where he is imprisoned in a psychiatric ward and the narrative injects a pointless notion that he may be insane. While this works so well in Legion, here the subplot is plodding. But in the end, after he exhibits his first manifestation of his superhuman martial arts the show picks up momentum. 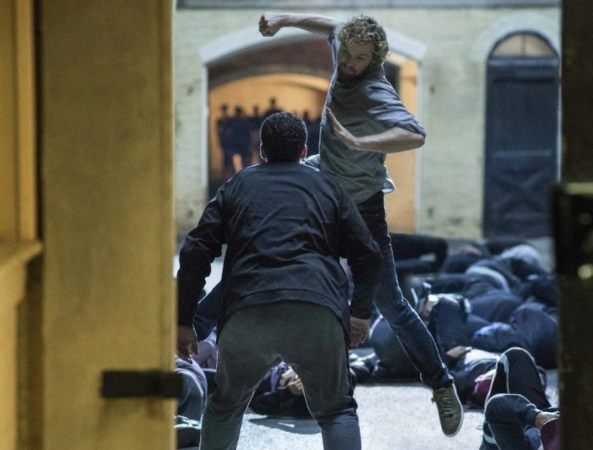 Speaking of martial arts, a major drawback to Iron Fist is that for a TV show about martial arts many of the fight scenes lack power and energy. They look too choreographed and listless. This is seen in the first few minutes of the first episode “Snow Gives Way” when Danny has a by-the-numbers fight with some guards as he tries to contact the Meachums. This is a dangerous flaw for a show of this type. We are supposed to be shown that he is a superhuman martial artist, but the show has a hard time showing this to viewers. There are some good fight sequences though, many of which involve Wing, who is one of the best characters on the show, but they pale when compared to Daredevil or even Arrow.

But take heart in knowing that whenever Danny’s hands start glowing, you will be treated to some climatic displays of raw power. One drawback to keeping this show in the gritty and grounded MCU shows from Netflix is that it prevents the more mystical aspects of Rand’s backstory from being shown. It might’ve lightened the show’s mood and better matched Danny’s persona.

Of all the heroes in these shows, he seems to be the most optimistic and exudes an inner calm. This presents a challenge in that it makes it difficult to showcase any of the inner turmoil and demons which plague the stars of Daredevil, Jessica Jones and Luke Cage. In reality, this different kind of personality is a welcome change of pace from all the brooding and conflicted heroes, though it makes him a bit one dimensional. Danny just wants to do good for others during his return to our world. He just has to go through these hurdles to achieve this goal.

Once the show gets going after the early episodes, it picks up the pace and becomes more action-oriented as we want to see what happens next to these characters. The villains are not the greatest but there are attempts to give them some layering, which keeps things interesting. In Joy’s case, groundwork is laid for making her more amendable to Danny’s cause. While we try to figure out what is Harold’s ultimate agenda and though Ward comes off as one dimensional at first, there is more to him than being a corporate tool. 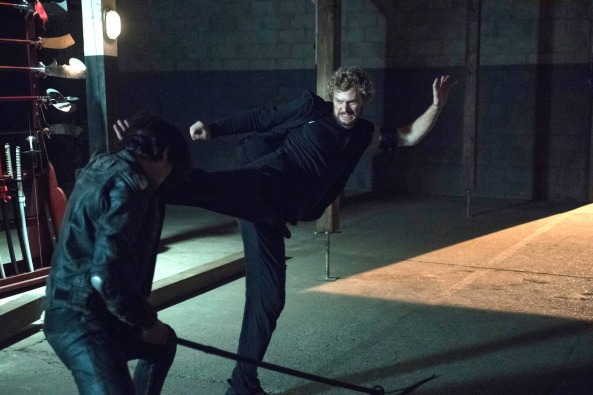 When compared to Daredevil (season one) or Jessica Jones, Iron Fist does not reach their levels of quality. Yet, it has its merits and is a welcome addition to the MCU. Frankly, much of the criticism is unfortunate because Iron Fist is being faithful to the source material, in the comic books he is a white man who grew up practicing martial arts in an Asian-inspired dimension. Although on the surface it may seem like it, he does not embody the white savior cliché in the comics or this show despite what some critics may want to believe.  Others may simply be tiring of the MCU and are looking for a reason to take it down a notch. Whatever the case may be, try to keep an open mind and sample this show. Iron Fist takes a while to engage you, but once it does it’s worth binge watching.

5 comments on “Despite Controversy & Flaws Iron Fist Hits Its Mark”